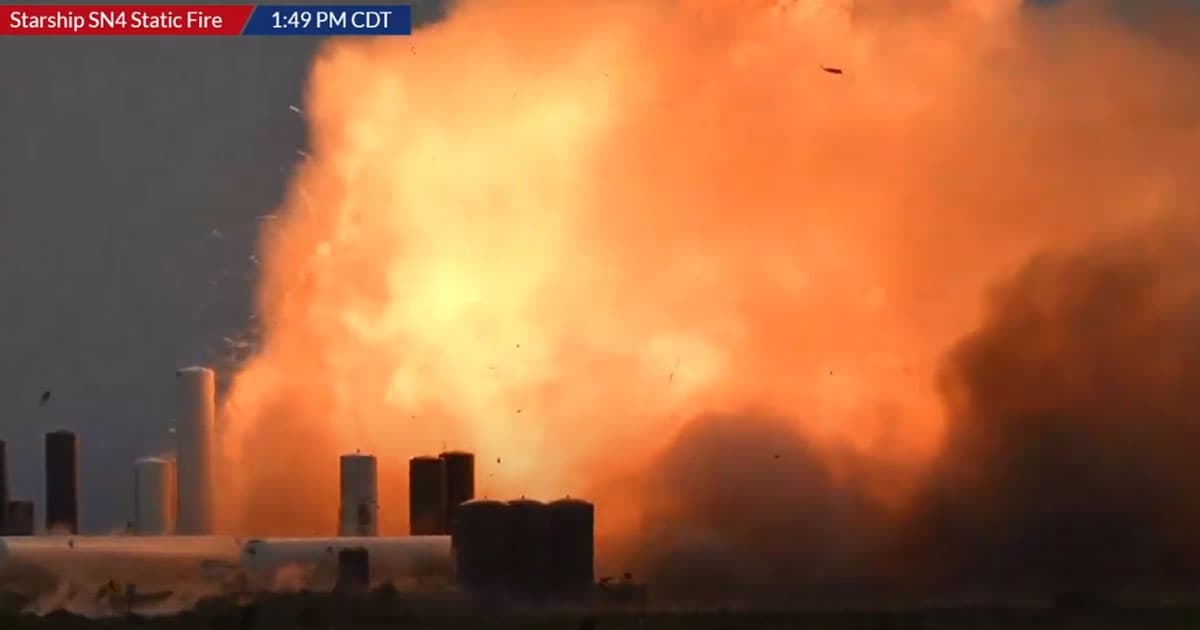 "This is a setback, and a dramatic one."

"This is a setback, and a dramatic one."

To realize its ambitious plans for sending up to 100 passengers to the Moon and Mars inside a massive Starship spacecraft, SpaceX is racing through prototypes.

During its fifth static fire today, the fourth Starship prototype, called SN4, erupted in a gigantic fireball around 2:50 pm Eastern time on Friday. Thanks to a live stream, courtesy of NASASpaceflight, you can watch the structure erupt into flames at SpaceX's Boca Chica testing facility.

The fact that the early prototype even withstood five static fires is impressive, and signifies a huge leap forward in SpaceX's race to get Starship off the ground.

It's the latest in a series of fireballs. SN1 failed a cryogenic proof test in February and was destroyed, crumpling up like a soda can. While SN2 fixed SN1's failure, SN3 was also destroyed due to a test configuration error.

At first, SN4 appeared to pass its fifth static fire test, but minutes later, a thick cloud of gas could be seen leaking out of the structure. Not a minute later, the prototype rocket — and launch pad — was obliterated, leaving only wreckage. The exact cause is still unknown.

But You Get Up Again

Losing SN4 is a setback for the Elon Musk-led space company, but not an insurmountable one.

"SpaceX got a lot further with SN4 than previous vehicles, and SN5 seems about ready to go for testing," senior space editor at Ars Technica Eric Berger wrote in a tweet. "They also have begun working on a second launch stand in Boca Chica."

"So this is a setback, and a dramatic one," Berger added. "But it's a process."