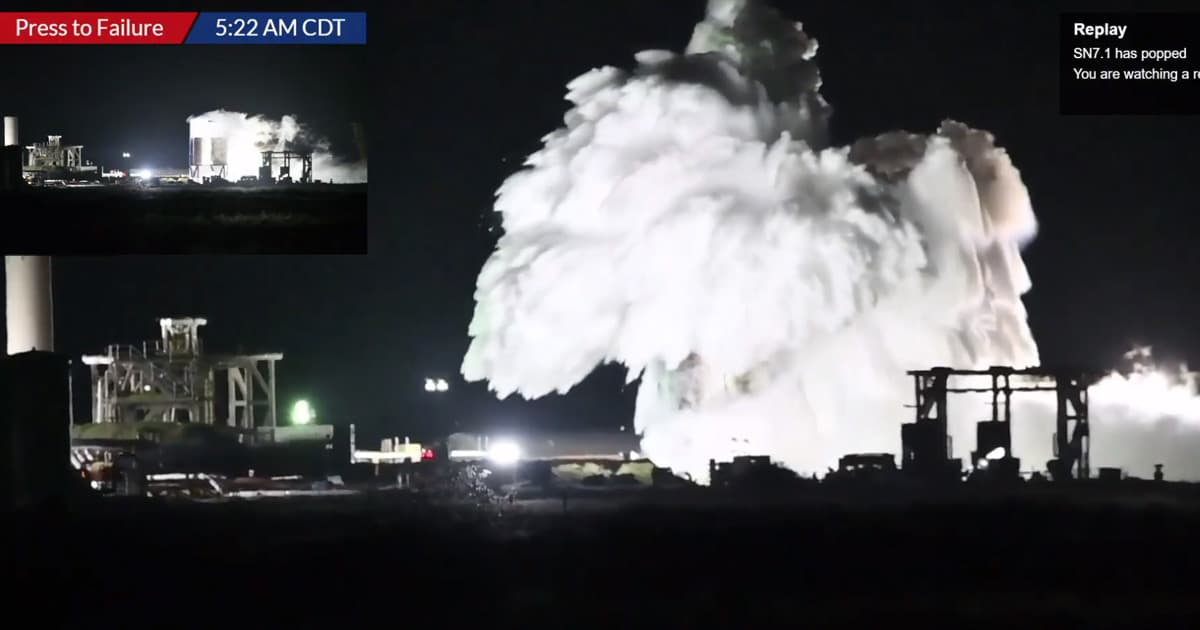 "Test Tank SN7.1 has entered the gates of Valhalla!"

"Test Tank SN7.1 has entered the gates of Valhalla!"

It was quite the explosion, leaving behind a gigantic plume of white fumes.

WITNESS! Test Tank SN7.1 has entered the gates of Valhalla!

Pushed to destruction, on purpose. Hopefully after reaching a good bar rating.

The tank, dubbed SN7.1, is a more complex version of its predecessor, SN7, which was meant to test the steel alloy construction of the company's Starship spacecraft's cryogenic fuel tanks. SpaceX was testing a new steel alloy with SN7.1.

SN7 was also pushed to the brink and failed spectacularly as a result of a rupture from underneath the tank during a test on June 23.

The space company's prototype spacecraft SN6 "hopped" successfully to an altitude of 150 meters on September 3 — the second hop of its kind.

It's yet another small, incremental step in SpaceX’s ambitious efforts toward building a rocket capable of ferrying up to 100 passengers, or 100 tons of cargo, to the Moon and even Mars.

Next up is SN8, a prototype spacecraft that's rapidly approaching its maiden flight. SN8 will look  quite a bit more like the Starship renders we've seen for a number of years now. It will sport three — as opposed to just one — Raptor engines, a nosecone, and aero surfaces known as "wings."

SN8 will attempt to fly to a height of 12 miles (20 kilometers) and will even attempt to perform a "belly-flop" maneuver as it begins to fall out of the sky to slow its descent.