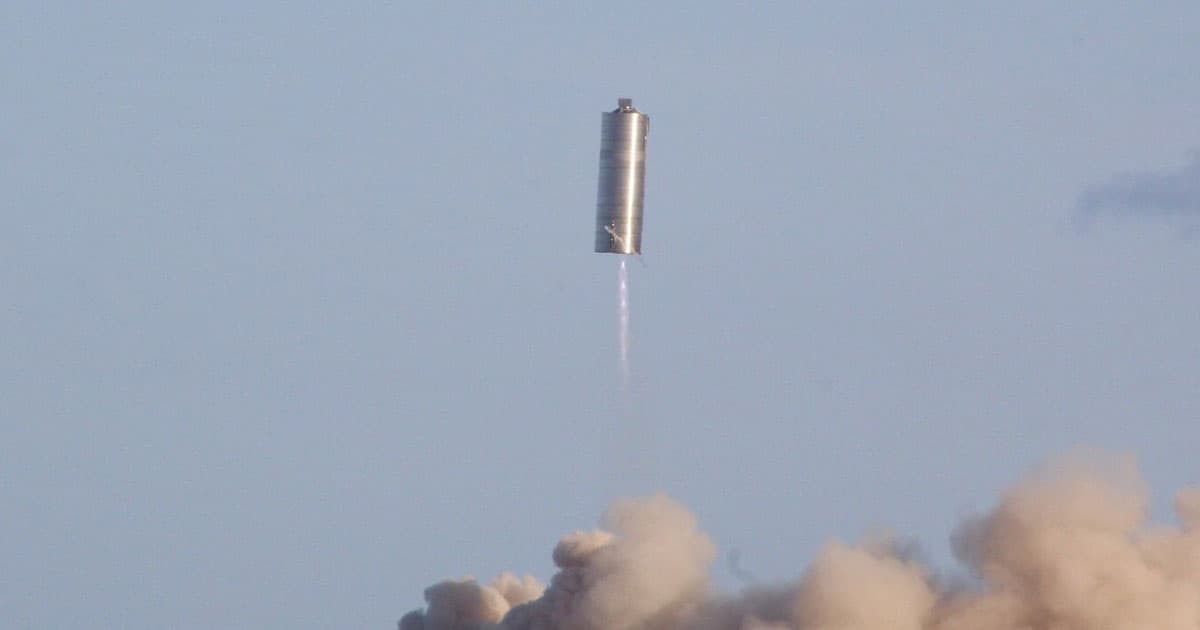 They Launched a PROTOTYPE WHAT EVEN

SpaceX has successfully flown its massive SN5 Starship prototype at its Boca Chica, Texas testing grounds to a planned height of 150 meters, or roughly 500 feet.

And it was quite the sight — a livestream showed the gigantic cylindrical stainless steel structure float up into the air, leaving a massive dust cloud behind. It then smoothly made its return journey downward.

Under the power of Raptor SN27, SN5 has conducted what looks like a successful flight!

Listen to the SpaceXers cheer!

It's a big milestone in SpaceX's efforts to build a rocket capable of ferrying up to 100 passengers (or 100 tons of cargo) to the Moon and even Mars.

The massive fuel tank, the company's sixth full-scale testing prototype, lifted off the ground, with only one of the company's next-generation Raptor rocket engines roaring below.

Just so we're clear, SpaceX built a Mars rocket out of rolls of steel, in tents, in South Texas, in weeks. And the first time they flew it, it made a smooth launch, a controlled flight, and safely landed. This is truly remarkable.

Despite today's success, the SpaceX team still has a long way to go. The final version is designed to hold six Raptor engines and sport a massive nosecone on top. During today's test, SN5 had a simulated payload mounted to the top of it to compensate for future payloads.

An earlier attempt on Monday had to be scrubbed. "Scrubbed for the day," SpaceX CEO Elon Musk wrote on Twitter yesterday from the Boca Chica control room. "A Raptor turbopump spin start valve didn’t open, triggering an automatic abort."

The news comes after a series of preceding prototypes have crumpled like cans or exploded spectacularly in a giant fireball.

A scaled-down version called "Starhopper" flew to 150 meters during a successful attempt in August 2019. "One day Starship will land on the rusty sands of Mars," Musk quipped on Twitter at the time.