Elon Musk Was Pretty Pissed When His Starship Prototype Exploded 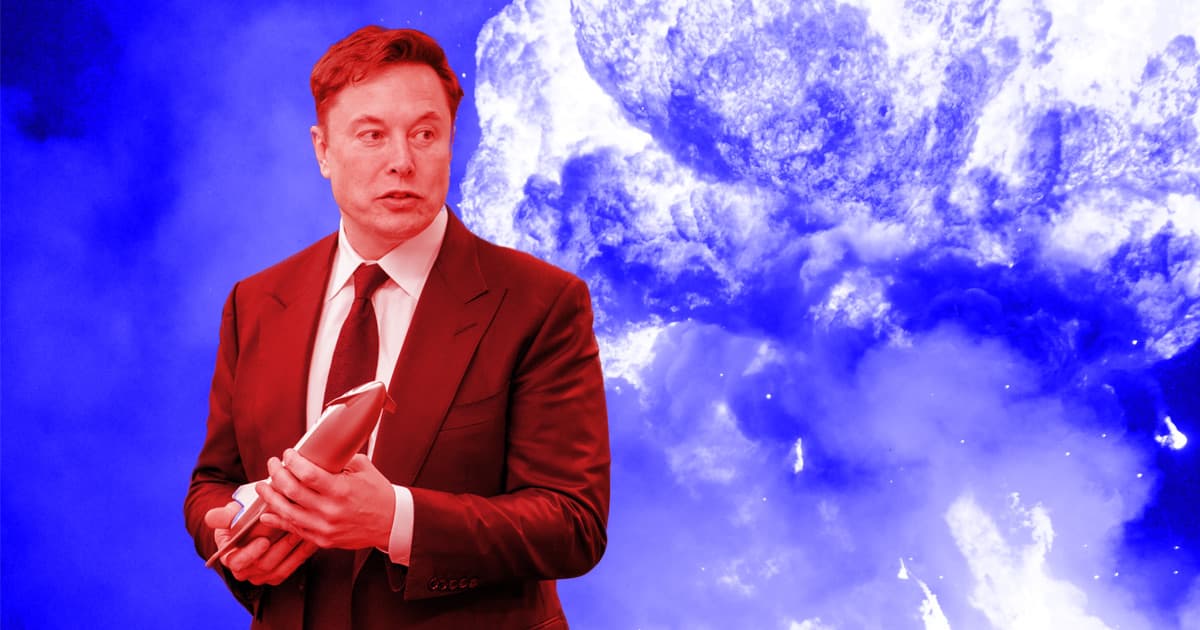 And to get there, he's willing to put together an army of engineers at his space company's facilities in Boca Chica, Texas, to keep churning out Starship rocket prototypes — a massive stainless steel rocket, just shy of 400 feet — that he wants to use to one day ferry up to 100 passengers to distant planets.

But failure is always a possibility during testing, especially after a hiring spree that added hundreds of workers to the company's labor pool practically overnight.

The space company held a career day last month, doubling its workforce at the South Texas Launch Site to more than 500 workers, according to Ars Technica.

That kind of massive shift in the labor force can put a strain on morale, as Ars Technica's senior space editor Eric Berger reports after being personally invited to check out SpaceX's rapidly growing Texas headquarters.

According to Berger's interview with Musk, though, the eccentric entrepreneur was angry about the failure behind the scenes.

"We sent out a note to the team that this was badly designed, badly built, and badly checked,” he told Berger. "That’s just a statement of fact."

Musk exhorted his engineers to be far more careful.

"I told them that, in the future, you treat that rocket like it’s your baby, and you do not send it to the test site unless you think your baby’s going to be OK," he told Berger.

And Musk said he wanted the engineers to be honest with him — not just build a rocket they knew would crumple like a can under pressure.

"What’s not OK is they think that the weld is not good, they don’t tell me, they take it to the pad and blow it up," Musk added. "Now I have been clear. There’s plenty of forgiveness if you pass me the buck. There is no forgiveness if you don’t."

According to Berger's report, Musk's specific design frustrations included an inverted cone design, which he called a "thrust puck," where three massive Raptor engines attach to the  body of the spacecraft itself.

"It’s such a dumb design," Musk told Berger. "It’s one of the dumbest things on the whole rocket because it’s heavy, expensive, and unreliable."

The SN1 incident was a minor hiccup, in the grand scheme of things — the prototype was on the chopping block anyways with crews working hard on the next iteration already.

But the incident is proving frustrating for Musk, who has his mind set on a much grander vision. The billionaire doesn't want just one working Starship — he eventually wants his company to build a vast number.

In November, Musk explained on Twitter that his vision is for a fleet of 1,000 Starships to carry enough cargo and passengers to establish a Martian city. With enough trips, that'd come out to one million people on Mars as soon as 2050, according to Musk.

But before then, SpaceX is bound to explode plenty more prototypes before settling on a final design.

More on Starships: Elon Musk Tweets Vid of Starship Crumpling Up Like a Soda Can

Read This Next
Lonely Planet
Scientists Find Nearby Planet the Same Size of Earth, Plan to Search It for Life
Hall Effect
Test Suggests Ion Thrusters Could Power Crewed Interplanetary Missions
Shoo
Scientists Warn Giant Asteroid Is Actually Swarm, Nearly Impossible to Destroy
What Does It All Mean?
The Second Alien Probe We Detect May Be Particularly Bizarre, Scientist Says
A Sip of Opal
NASA Discovers Precious Gemstones on Mars
More on Off World
Little Guy
3:28 PM on the byte
Scientists Prototype "Creeping" Lizard-Like Robot for Exploring Mars
Killernova
Yesterday on the byte
Scientists Find "One in Ten Billion" Star System Primed to Explode in Titanic Kilonova
Take Cover
Feb 4 on the byte
Space Startup Blows Up Another Giant Inflatable Space Station Module
READ MORE STORIES ABOUT / Off World
Keep up.
Subscribe to our daily newsletter to keep in touch with the subjects shaping our future.
+Social+Newsletter
TopicsAbout UsContact Us
Copyright ©, Camden Media Inc All Rights Reserved. See our User Agreement, Privacy Policy and Data Use Policy. The material on this site may not be reproduced, distributed, transmitted, cached or otherwise used, except with prior written permission of Futurism. Articles may contain affiliate links which enable us to share in the revenue of any purchases made.
Fonts by Typekit and Monotype.