Cosmonauts Hacked Away at the ISS in Search of Sabotage Evidence

It took hours before they could finally see the hole at the center of the controversy. 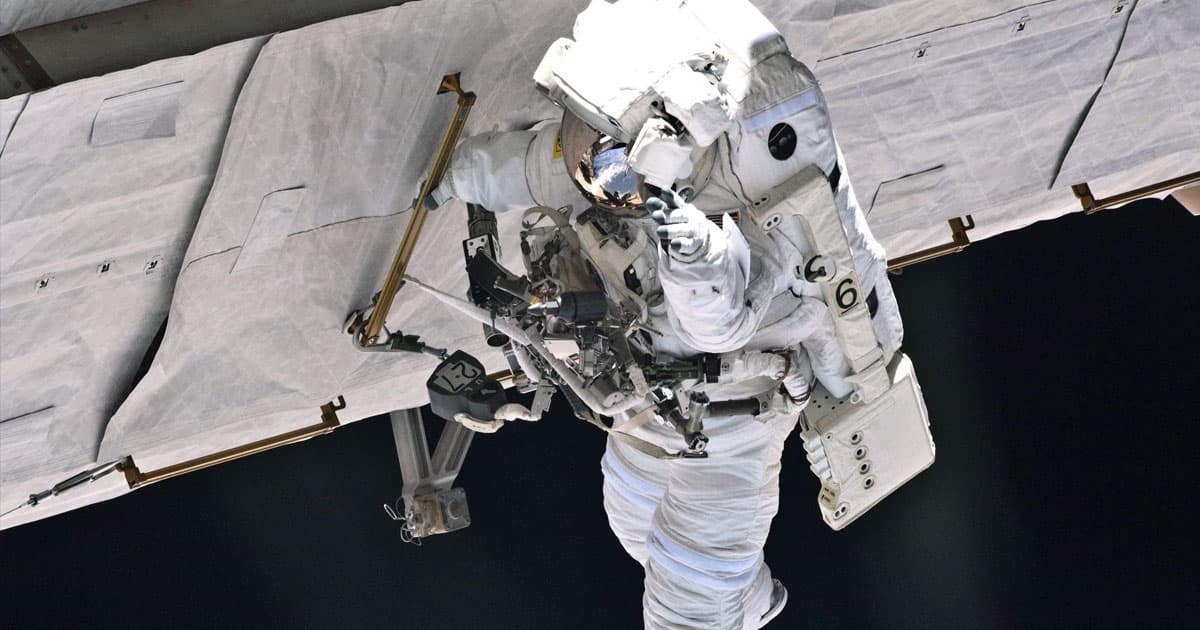 It took a little longer than expected, but by all accounts, Tuesday's spacewalk was a success.

At around 11 am ET, International Space Station (ISS) cosmonauts Oleg Kononenko and Sergei Prokopyev set out on a spacewalk expected to take about six hours. The purpose: examine a hole in the Soyuz capsule that some believe could have been an act of sabotage.

Five hours later, the pair finally got their first glimpse of the hole, and less than three hours after that, they were safely back within the ISS.

According to a report by the Associated Press, Kononenko and Sergei spent the first four hours of their ISS spacewalk simply making their way to the site of the hole, covering a distance of approximately 30 meters (100 feet).

Then, using a knife and long cutters, they dedicated more than an hour to removing a 10-by-10 inch patch of insulation on the exterior of the Soyuz. The purpose of the work was to expose the capsule's external hull.

Finally, the cosmonauts were able to see the hole, which measured about 2 millimeters (one-tenth of an inch) in diameter. Unlike the view of the hole from the interior of the Soyuz, which bore what looked to be drill marks near it, from the exterior, the hole just looked like a tiny black dot — no drill marks.

The cosmonauts collected samples from near the site of the hole before patching the insulation and returning to the space station, roughly eight hours after their ISS spacewalk began.

The samples Kononenko and Sergei collected will return to Earth aboard the Soyuz when it detaches from the ISS on December 19.

The part of the hull with the hole in it will detach from the capsule before it renters Earth's atmosphere. That means the samples, along with any photo and video evidence, may end up being the only clues investigators have to the origin of this mysterious hole in the ISS.

More on the ISS sabotage: Russians Search Exterior of ISS for Signs of Sabotage on Spacewalk

Read This Next
Sabers Rattled
Russia Issues Veiled Threat to Shoot Down Pesky SpaceX Satellites
Don't let the door hit you
Elon Musk Lobs Casual Space Station Burn at Moscow
Sad ROSS
Russia's New Space Station Gets Sadder the More We Hear About It
Buh Bye
Russia Says It's Definitely Quitting the ISS But Doesn't Say When Exactly
Don't Let the Door Hit You
Russian Space Chief Leaving Post, May Be Headed to War Zone
More on Off World
Killernova
6:10 PM on the byte
Scientists Find "One in Ten Billion" Star System Primed to Explode in Titanic Kilonova
Lonely Planet
Yesterday on futurism
Scientists Find Nearby Planet the Same Size of Earth, Plan to Search It for Life
Take Cover
Feb 4 on the byte
Space Startup Blows Up Another Giant Inflatable Space Station Module
READ MORE STORIES ABOUT / Off World
Keep up.
Subscribe to our daily newsletter to keep in touch with the subjects shaping our future.
+Social+Newsletter
TopicsAbout UsContact Us
Copyright ©, Camden Media Inc All Rights Reserved. See our User Agreement, Privacy Policy and Data Use Policy. The material on this site may not be reproduced, distributed, transmitted, cached or otherwise used, except with prior written permission of Futurism. Articles may contain affiliate links which enable us to share in the revenue of any purchases made.
Fonts by Typekit and Monotype.