Russians Search Exterior of ISS For Signs of Sabotage on Spacewalk

Russia still isn't convinced that hole was made accidentally. 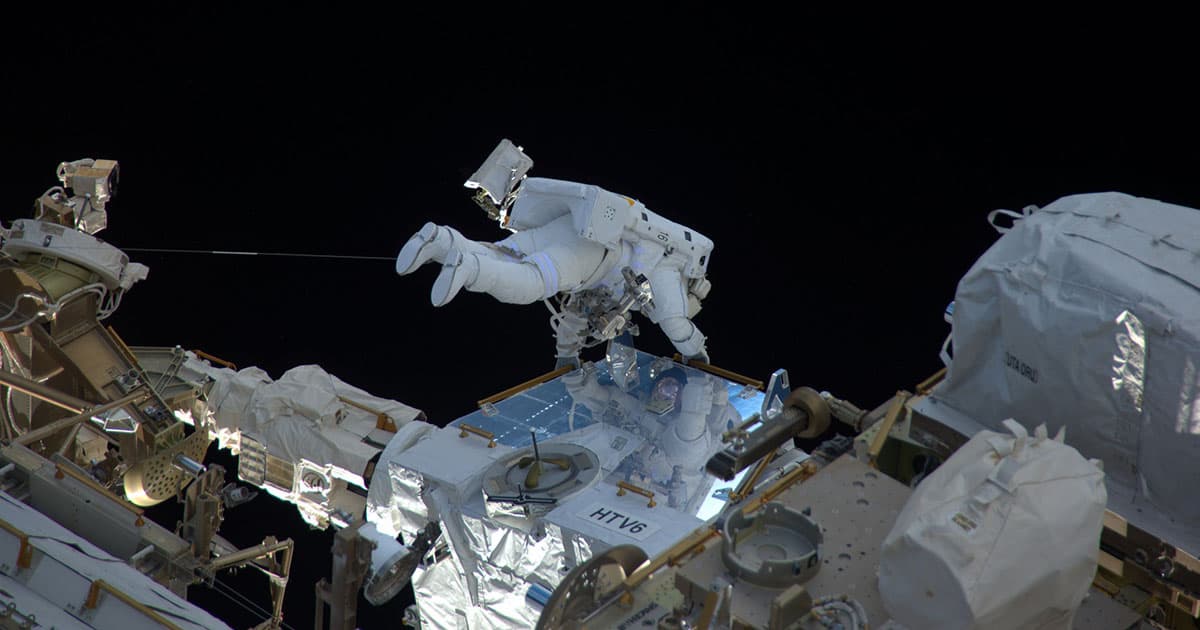 Russia is determined to figure out who, if anyone, attempted to sabotage the International Space Station (ISS).

At 11 am EST on Tuesday, two cosmonauts aboard the ISS left the relative comforts of the space station for the dangerous cold of space.

During a spacewalk expected to last six hours, they will investigate a tiny hole discovered in the side of the station's orbital outpost this summer — a hole the head of Russia's space agency believes could be the work of a saboteur.

On August 29, ISS flight controllers in Houston and Moscow noticed a slight drop in the ISS's air pressure. The next morning, ISS crew members discovered the two-millimeter-wide hole in the side of the Soyuz capsule and used tape to patch it.

Officials initially attributed the hole to a collision with a small meteorite. Several days later, though, Dmitry Rogozin, the Director General of Roscosmos, dismissed that theory.

"There were several attempts at drilling," he said via televised comments, noting that he is not ruling out "deliberate interference in space."

During their livestreamed spacewalk, which is expected to end at about 5 pm EST, ISS astronauts Oleg Kononenko and Sergey Prokopyev will examine the hole for any clues as to its origin, taking photos and looking for residue.

As Rogozin told Russian news agency Tass in September, getting to the bottom of this issue is a matter of "honor" for the agency, and it plans to do whatever it takes to find the person responsible. "And we will find out, without fail," Rogozin promised.

If that's not enough to leave the culprit — if there is one — shaking in their spaceboots, we're not sure what would be.

More on the ISS hole: Someone Drilled a Hole in the ISS. Was It a Mistake or Sabotage?

Read This Next
Duck and Roll
Russia Forced to Dodge Space Debris From When It Blew Up Satellite
Ice Ice Baby
Check Out This Moon-Shaped Ice Crystal on the Space Station's Window
Scheming Dmitry
Former NASA Official Says Russian Space Head Is Trapped, Trying to Escape
Shuttling Russians
NASA Deciding Whether Russian Cosmonaut Is Allowed on SpaceX Launch
Moon Dudes
Putin Says Russia Is Landing on the Moon This Year
More on Off World
Going Down
Yesterday on the byte
Scientists Say the Sun Is Acting Up and Causing Satellites to Fall Back to Earth
Target Practice
Friday on the byte
NASA Spots Location Where Derelict Rocket Smashed Into the Moon
Fly Already
Friday on the byte
SpaceX Finally Lifts Super Heavy Booster Using Giant Robot Arms
READ MORE STORIES ABOUT / Off World
Keep up.
Subscribe to our daily newsletter to keep in touch with the subjects shaping our future.
+Social+Newsletter
TopicsAbout UsContact Us
Copyright ©, Camden Media Inc All Rights Reserved. See our User Agreement, Privacy Policy and Data Use Policy. The material on this site may not be reproduced, distributed, transmitted, cached or otherwise used, except with prior written permission of Futurism. Fonts by Typekit and Monotype.