There were a "variety of responses." 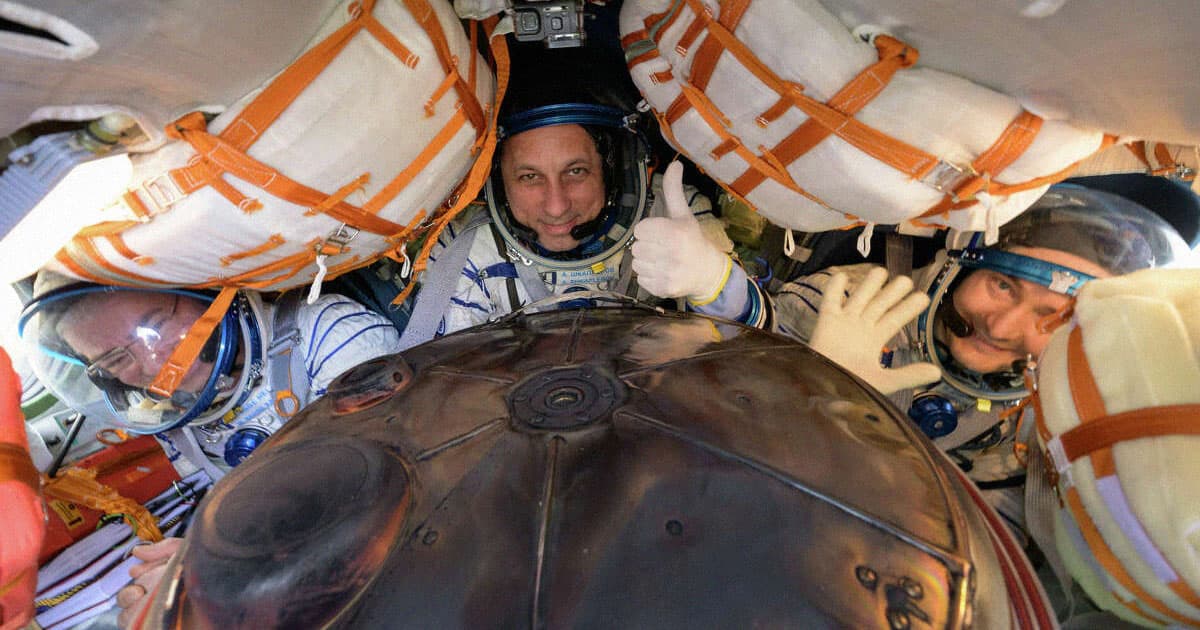 It's been a little awkward on the International Space Station as of late, considering the geopolitical crisis unfolding back on the ground — and the fact that several Russian cosmonauts are constantly mingling with NASA astronauts inside some pretty cramped quarters.

But according to NASA astronaut Mark Vande Hei, who returned inside a Russian Soyuz spacecraft alongside two other cosmonauts last week, everybody simply got on with their jobs — while, he said, sometimes discussing the unrest.

"About my relationship with my Russian crewmates, they were, are and will continue to be very dear friends of mine," he said during a Tuesday press conference, as quoted by Agence France Presse.

"We supported each other throughout everything," he added. "And I never had any concerns about my ability to continue working with them."

But, of course, Ukraine did come up at several points.

"There's varying levels of discomfort for them as well about the situation," Vande Hei told NBC News, "but we had a job to do."

As far as the cosmonauts' opinion on the matter, the NASA astronaut remained intentionally vague.

"I did bring [the Ukraine situation] up with both my crewmates that I landed with and all I really feel comfortable saying is there was a variety of responses," he told NBC.

The situation took yet another unexpected turn when three new Russian crew members, who boarded the ISS last month wearing yellow and blue space suits — the colors of the Ukrainian flag.

But according to Vande Hei, that wasn't the intention at all. Instead, he said, they were attempting to recognize the colors of their alma mater, Moscow State Technical University.

"All three of them happened to be associated with the same university, and I think they were kind of blindsided by it," he said at yesterday's press conference.

As for Rogozin's inflammatory tweets, Vande Hei speculated that he "never perceived those tweets as anything to take seriously."

"I just didn't spend a lot of emotional energy paying attention to it," he told reporters. "I heard about it. I kind of laughed it off and moved on."

In short, life goes on aboard the aging orbital outpost, despite the geopolitical mess unfolding hundreds of miles below.

But, if Rogozin's latest barrage of tweets over the weekend are anything to go by, over two decades of peaceful cooperation between Russia and its international partners on board the station are still very much on the line.

In one tweet, the space chief claimed Russia was preparing "concrete proposals to our country's leadership" on the possibility of cutting cooperation short, as translated by CNN.

He had formally requested for NASA, the European Space Agency, and the Canadian Space Agency to lift sanctions being aimed at Roscosmos and its partners over the invasion of Ukraine.

But as evidenced by the letters his space agency received, the three agencies have no plans to lift any such sanctions, something Rogozin deemed as "unacceptable."

"I believe that the restoration of normal relations between partners in the International Space Station and other joint projects is possible only with the complete and unconditional lifting of illegal sanctions," he wrote, as translated by Google.

Meanwhile, as Vande Hei readjusts to the gravitational pull of our planet's surface — and enjoying some guacamole for the first time in a long time — the political stalemate continues.

What that means for the future of the space station is anything but certain, but its demise is unlikely to be caused by any disagreements among crew members.

More on the ISS: Guy Snaps Photo of Space Station So Detailed You Can See Spacewalking Astronauts