Soft serve, gelato, and even smoothie bowls are a simple spin away. 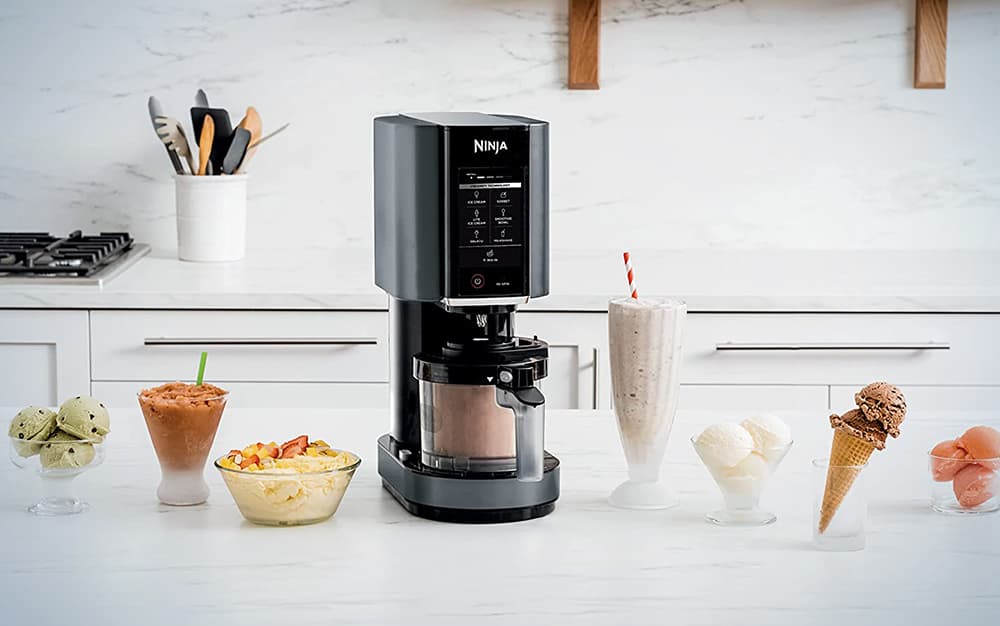 Homemade ice cream can be satisfying, but more often than not, it takes more time than simply picking up a pint of Häagen-Dazs from your local gas station. Ninja CREAMi Ice Cream Maker works much like a multi-thousand dollar Pacojet machine and pulverizes ice cream base into smooth and satisfying frozen desserts straight from the freezer. Because it churns as it spins, the first bite of your latest batch of butter pecan, chocolate chip, or even classic vanilla will be as satisfying as the last. But that's just the beginning of the frozen dessert possibilities you can dish out with Ninja CREAMi. The device has dedicated settings for ice cream, sorbet, lite ice cream, milkshakes, and even Instagram-worthy smoothie bowls.

The Ninja CREAMi is so simple, even kids can use it, with some light supervision of course. You don't even have to cook ice cream bases, and you can use ingredients found in most fridges and pantries. But the best part? The mix-in button lets you pulverize everything from crushed Oreos to gummy worms and even M&Ms, just like a classic Blizzard or McFlurry dessert. Never again do you have to brave the McDonald's drive-thru and be heartbroken by the McFlurry machine being on the fritz. This ice cream miracle machine is great at full price, but for Prime Day only, you can save $70. Of course, you need to be an Amazon Prime subscriber to take advantage of the deal, but you can get a free 30-day trial here.

Read This Next
FROM THE DEPT. OF THINGS TO BUY
Breville Joule Oven Air-Fryer Pro Review: It Made Me Ditch My Oven
FROM THE DEPT. OF THINGS TO BUY
Review: Masterbuilt Gravity Series 800 Outsmokes Every Pricey Pellet Grill
From the Dept. of Buying Things
Review: The EF ECOFLOW Delta Max Solar Panel Bundle is Portable, Powerful, and Sustainable
FROM THE DEPT. OF THINGS TO BUY
SiOnyx Aurora Pro Night Vision Camera Review: My Secret Late-Night Adventuring Tool
FROM THE DEPT. OF THINGS TO BUY
The Best Tablets for Note-Taking of 2022
More on Sci-Fi Visions
HIV Vaccine
Dec 2 on neoscope
Scientists Hopeful About Promising Results From HIV Vaccine
LIfe Finds a Way
Dec 1 on the byte
Billionaire Private Astronaut Suggests Reviving Dinosaurs
Health Revelation
Nov 22 on neoscope
Chris Hemsworth Reveals Grim Genetic Test Results, Will Take Break From Acting
READ MORE STORIES ABOUT / Sci-Fi Visions
Keep up.
Subscribe to our daily newsletter to keep in touch with the subjects shaping our future.
+Social+Newsletter
TopicsAbout UsContact Us
Copyright ©, Camden Media Inc All Rights Reserved. See our User Agreement, Privacy Policy and Data Use Policy. The material on this site may not be reproduced, distributed, transmitted, cached or otherwise used, except with prior written permission of Futurism. Articles may contain affiliate links which enable us to share in the revenue of any purchases made.
Fonts by Typekit and Monotype.