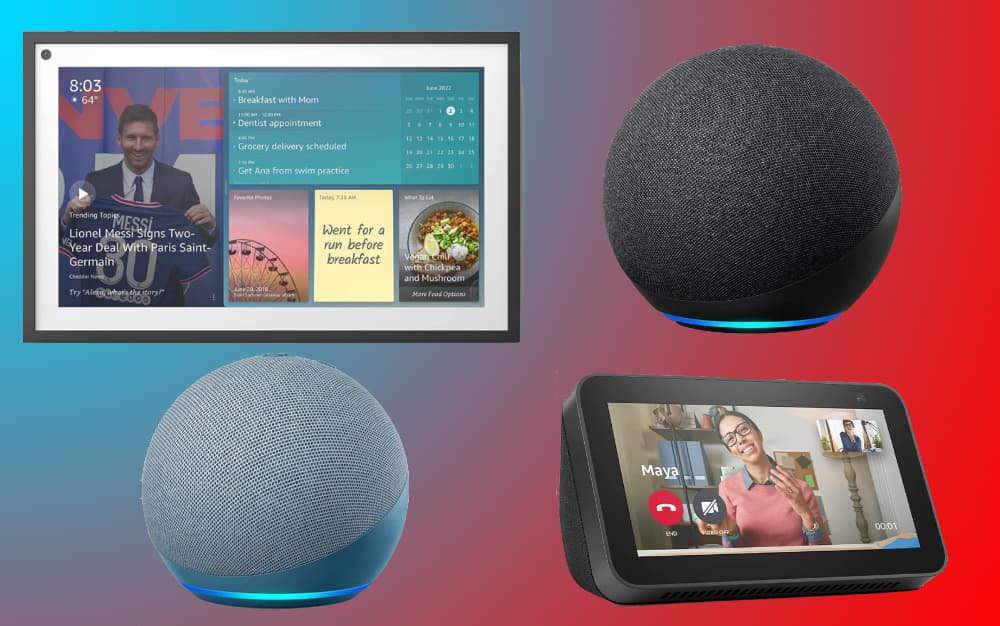 You don't need to ask Alexa whether it's Prime Day; the two-day shopping event is live now, and will continue until until 11:59 PST on July 13.

Amazon is celebrating Prime Day by deeply discounting its own hardware, and there are some particularly good deals on its line of Echo speakers. Virtually every Echo is on sale, but some deals standout more than others. Below are the top Amazon Echo deals of Prime Day 2022.

This $30 discount on the fourth-generation Echo Dot isn't just the best deal in this story, it's arguably the best deal of Prime Day 2022. Amazon's latest mini-sized smart speaker has all the same features as its older siblings, but in a much smaller package.

The Echo Dot works with Alexa, Amazon's smart assistant, which allows you to get set timers, send messages, and get answers to questions like "how many pints are in a quart." You can expand the Echo Dot's functionality by installing third party "skills," which are basically just apps.

If you use a grocery app on your phone, for example, enabling that company's skill will allow you to add items to your list using your voice. The added updated list will sync to your phone, and you can pull it up when you're out shopping. You can also use the Echo Dot as a smart home hub to control accessories like light bulbs, sprinkler systems, and even your front door's lock.

The fourth-generation Echo Dot addresses the one complaint many people had with previous models: substandard sound. The Echo Dot has an improved front-firing speaker system. If you're still not satisfied with its sound, you can hook it up to a stereo receiver or stronger speaker using its 3.5mm audio output.

Amazon continues to improve Alexa on a regular basis, so the $20 Echo Dot you purchase today will actually get better over time. If you're looking to get your first smart speaker, or want to use Alexa in another room of your house, this is the Echo to get.

The second-generation Echo Show 5 has the same smart features as the Echo Dot, but can display information on a screen in addition to using its speaker. This comes in handy when you ask for a weather forecast, as you can actually see the highs, lows, and weather conditions instead of waiting for Alexa to rattle that information day-by-day.

The Echo Show 5's screen can also let you interact with your home's smart home accessories more easily. If you ask to see your smart lightbulbs, you can tap its screen to turn them on and off. If your home-security system works with Alexa, you can ask the Echo Show 5 to show you a live video feed from a camera.

When you're not actively using the Echo Show 5, the device works well as a digital clock ideal for your bedside table or desk. This is the Echo deal to take advantage of if you're familiar with smart speakers, but prefer to see information rather than hear it.

The fourth-generation Echo has the same basic design as the Echo Dot, but its larger size accommodates a better, multi-speaker audio system. The single woofer and double tweeter array sounded better than we expected in our tests, and we can recommend using the Echo as a standalone Bluetooth speaker even if you don't plan on using Alexa.

If you want to get the best-possible sound from the fourth-generation Echo, your best bet is to get two of them and set both speakers up as a stereo pair. This will allow you to listen to your music in true stereo, the way it was mixed and meant to be heard. Normally, setting up to Echos as a stereo pair would be indulgent, but it's far easier to justify thanks to Amazon's Prime Day discount. The fourth-generation Echo is 40 percent off, so you're almost getting a two-for-one deal.

Anyone shopping for speakers during Prime Day 2022 should take advantage of Amazon's discount on the fourth-generation Echo, especially if you pick up a pair to listen in stereo.

We feel that the Echo Show 15 is Amazon's most helpful smart speaker, and an incredible value during Prime Day 2022.

The smart speaker's massive 15.6-inch HD display is gorgeous in person, and allows you to use the device as a digital calendar, always-on smart home hub, and video streaming device. We recommend setting up the Echo Show 15 in a common area, like the kitchen, to take advantage of its full potential. Everyone you live with will be able to see one another's schedules at a glance, and use skills to leave notes, or add calendar events.

TV shows and movies look impressive on the Echo Show 15, and Amazon allows you to stream videos from popular services like Netflix and Hulu. Naturally, Amazon Video is also supported. A standalone kitchen TV may not make sense in most homes (especially an apartment), but the Echo Show 15 is slim enough that you can easily tuck it into a corner.

Amazon includes mounting hardware with the Echo Show 15, so you can attach it directly to a wall, which is especially helpful if you'd like to use it primarily as a digital calendar. If you use Amazon photos, you can also use this Echo has a big digital picture frame. The Echo Show 15 is well worth its typical price, but Amazon's Prime Day discount makes the deal even better.