The Best Emergency Power Stations of 2023

Stay connected wherever you go. 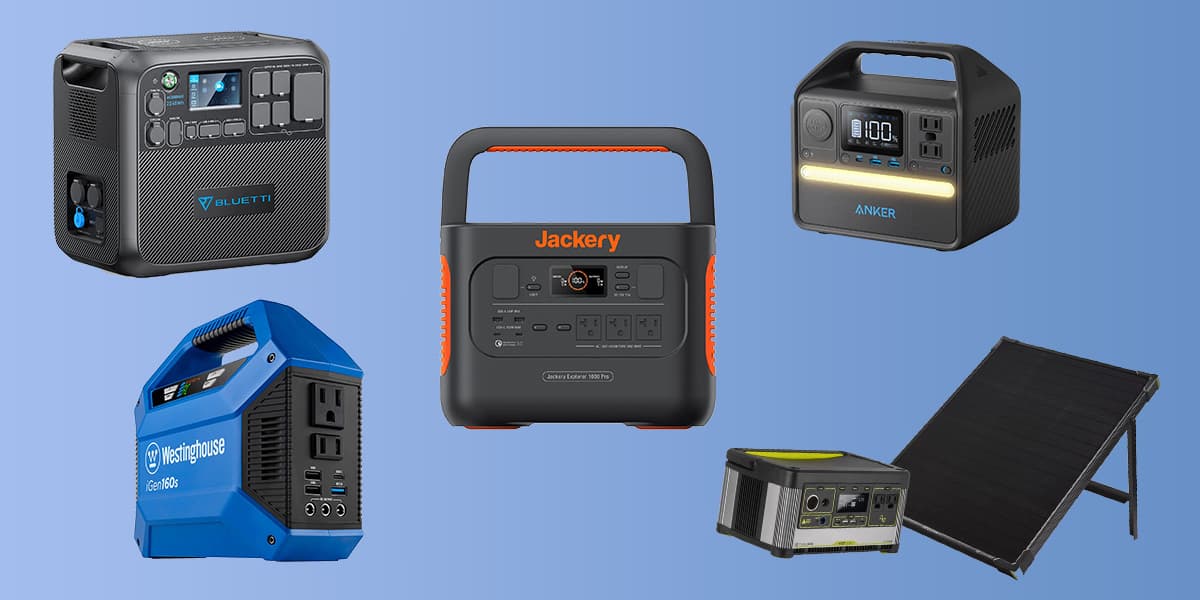 Though we may not like to admit it, most of us have come to depend on a small arsenal of personal electronics devices to get us through the day, which is why it can be especially jarring when a power outage or trip to a remote camping site threatens our ability to use these devices. Fortunately, there are emergency power stations that can allow your smartphone and laptop to be charged while keeping a few lights on until the power is restored or you return to civilization.

These power stations come in a variety of sizes, including small portable models that weigh just a few pounds and produce around 200 watts of energy, 62-pound power-generating monsters that can pump out as much as 2,000 watts of electricity (enough to power a small air conditioner for a short time), and everything in between.

With such a broad range of power capacities, finding the right one to suit your needs can be more than a little confusing. Ahead, learn about what features you should consider when shopping for the best emergency power stations and check out our list of top picks.

How We Picked the Best Emergency Power Stations

Like many people, I have a small arsenal of portable electronics that regularly require charging. And although I may be able to go without them during a power outage or remote camping trip, I’d rather not. I also understand that keeping lights and even some small appliances operating can be vital when a power outage strikes. I kept that in mind while reviewing dozens of portable power stations for my curated list of the top models.

Max Output: A power station is only as good as the amount of power it produces, so the max output was key. I favored models that offer higher maximum outputs for a reasonable price over higher-priced models that offered similar outputs.

Capacity: Perhaps more crucial than max output is how much juice the power station can supply before becoming depleted. I chose only higher-capacity models that could deliver plenty of power to charge electronics or power small appliances and lights for many hours. For smaller portable models, I chose power stations that could provide sufficient power to recharge smart devices or a laptop.

Size: A charging station must be portable to be useful. With that in mind, I chose power stations that could provide ample capacity and output while still remaining light enough to carry. I chose only portable models that weighed well under 10 pounds. Higher-capacity charging stations still needed to be light enough for one or two people to move, so I chose models that weighed 62 pounds or less.

Outputs: Since outputs limit the number and type of electronics the power station can serve, I chose portable charging stations with a broad set of outlet types that could power multiple devices at a time.

Why It Made The Cut: The Jackery hits all the crucial marks with its high-power capacity, versatile collection of outlets, and manageable weight.

Cons:
— One of the more expensive options

While the Jackery Explorer 1000 may be one of the more expensive models on the market, its ample power output and lightweight design make it worth the extra expense. With its 1,000-watt output, it’s capable of running a laptop or keeping a few lights on through the night.

We also like the digital display on this model, which is easy to read, clearly showing the generator’s wattage output as well as what percentage of juice is remaining. Being able to charge laptops, smartphones, lights, and other devices simultaneously without the need for adapters is also an important feature of a power station. With its five ports, which include three 3-prong outlets as well as two USB-A, and two USB-C outputs, the Explorer 1000 offers more output options than most portable power stations we could find.

Despite its ample power output, Jackery manages to keep the Explorer 1000 at a manageable weight of 22 pounds. While it’s probably too heavy to tote into the woods for a camping trip, it is light enough for most adults to safely lift and carry.

Why It Made The Cut: We like the amount of power this model generates for its price tag, compact size, and lightweight.

Pros:
— Affordably priced for output and capacity
— Small size makes it easy to take on the road
— Compatible with solar panel

Cons:
— Not enough wattage to power bigger appliances such as electric grill and refrigerator

We love the ample output this portable power station offers for a price that’s more affordable than other similarly powered models. The Anker 521 Portable Power Station puts out a max of 200 watts with a total capacity of 250-watt hours. That’s enough juice to keep phones, laptops, e-readers, and other devices charged while also powering lights and even some small appliances that use less than 200 watts.

And, despite its low price, it comes equipped with a variety of connection types, including two standard USB sockets, a USB output that charges at a fast rate, and a DC output. We also like the size. At just 8.5 inches long, 5.67 inches wide, and 8.33 inches high, and weighing 8.2 pounds, it’s compact enough to take out to a campsite with its ample carrying handle, making it one of the best emergency power stations.

Why It Made The Cut: It’s hard not to be impressed with the 2,200-watt power output and capacity, some of the highest in the industry, this beast can put out.

With its ability to put out a whopping 2,200 watts of power—enough juice to power a small portable heater or even a microwave oven—the Bluetti is one of the highest output power stations you can buy. And while it tips the scales at 62 pounds, it’s still much lighter than most conventional gas-powered generators, making it ideal as a home backup during power outages or for RV use.

We also like that Bluetti Portable Power Station comes equipped with more outlet options than any model we reviewed, including four 3-prong AC outlets, one 12-volt outlet, four USB-A ports, one USB-C port,  two wireless chargers, and one car socket.

Unlike other models that have an LED or digital screen, Bluetti goes with an LCD touchscreen for controls, making it feel more in line with the smartphones, tablets, and other technology we interact with on a daily basis. It also recharges fairly quickly given its output: 5 hours with an AC adapter. And, when paired with a 900-watt solar panel, it can fully charge in as little as 3 hours via solar power.

Why It Made The Cut: We like the size and design of the solar panel included with this power station, which makes practical use of the sun to recharge the power station and your devices.

Cons:
— Expensive
— A little on the heavy side

A power station is a great backup when you don’t have access to electricity, but eventually, it’ll need a recharge. For those who plan on being off the grid for an extended period of time, Goal Zero’s Yeti 500X portable power station kit with a 50-watt solar panel is a great choice.

The power station puts out a max of 600 watts with a capacity of 505-watt hours, making it capable of charging smartphones, laptops, cameras, and other small devices while also providing backup power for lights and some small appliances. Like some of the other best emergency power stations, it includes a broad variety of outlet types, including three-prong, USB, and 12-volt connections, and is also rechargeable via a standard 120-volt outlet or a car 12-volt outlet.

Why It Made The Cut: We loved the ample output this power station offers for its compact size and affordable price.

Cons:
— Lower output and capacity than other power stations

Its light 3.75-pound weight and compact size—it’s smaller than a lunchbox—makes it easy to tote to the beach or trip to the campground (try that with a 60-pound power station). Despite its small size, it boasts a surprisingly wide variety of inputs, including two USB ports (one a Quick Charge), two USB-C ports, and a 12-volt DC output. Its 155-watt-hour output is enough to charge a laptop or smart device, speakers, or a drone for a few hours.

Things to Consider Before Buying an Emergency Power Station

Maximum Power Output: Since the purpose of a power station is to provide backup power when conventional sources aren’t available, exactly how much power it can provide and for how long are vital. There are two ratings to consider when shopping for a power station: max power output and capacity. Max power output is the maximum amount of watts the power station can deliver at a constant rate. This determines what it can power. For example, if you’re planning on using a power station to brew a cup of coffee in a 750-watt coffee market, it better has a max power output of at least 750 watts.

Power Capacity: Capacity is how much electricity the power station’s batteries can hold when fully charged. This is measured in watt hours. You can determine how much juice you can get out of a fully charged power station by dividing its capacity by the devices you plan to use with it. For example, a smartphone uses about 5.5 watts to fully recharge from zero to 100 percent. That means a charging station with 200-watt hours of capacity can charge that phone about 36 times (200/5.5) before it runs out of power. A small fan that uses about 10 watts of power will run for about 20 hours (200/10) before draining a 200-watt power station.

Outputs: For a portable charging station to be useful, it must have the outputs to connect with the devices you need to charge or power. That’s a little more complicated than it sounds due to the fact that electronics today use a variety of different types of plugs. Most small appliances and lamps use a standard 2- or 3-prong plug that can carry up to 1800 watts of power. Other Smaller electronics, such as smartphones, tablets, and e-readers, typically charge via a USB connector. Some laptops use oval-shaped USB Type-C connectors, while air pumps, and car chargers often use 12-volt DC power. Since not all power stations support all connections, it’s crucial to check what outputs the charger supports before making a purchase.

Portable power stations produce no emissions, so they’re safe to use indoors. They also have safety features that automatically turn the unit off if it begins to overheat due to overuse, preventing a fire hazard.

Q: What is the difference between a portable power station and a generator?

A portable power station uses rechargeable lithium-ion batteries to provide portable power whereas generators create energy from gasoline or propane-powered engines. Power stations are safe for use indoors but require a solar panel or connection to an electrical source to recharge once empty. Generators produce emissions and therefore must operate outdoors; however, they can run indefinitely during a power outage as long as they have fuel.

Q: How long does a portable power station last?

When selecting a power station, consider what electronics and appliances you plan to use with it and purchase the model that can deliver that output while remaining within your budget. The Jackery Explorer 1000 provides ample output for charging electronics, lights, and many small appliances at a reasonable price. If you’re looking for backup power to keep a smartphone up and running or a laptop charged, then consider the Anker 521 Portable Power Station, which will allow you to charge a smartphone, e-reader, laptop, and a mini fridge for a more affordable price.