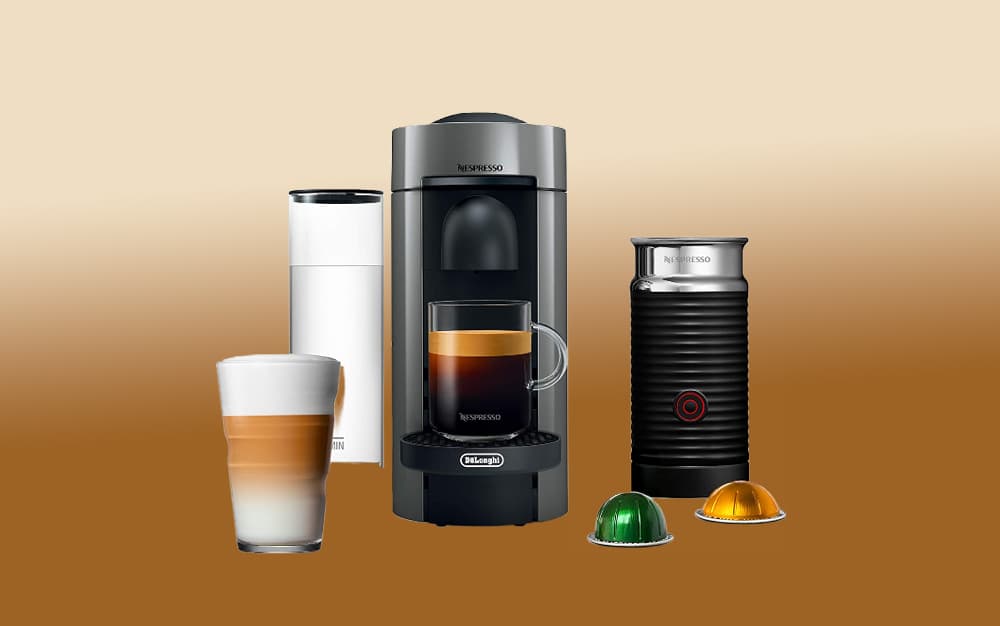 What's better than a perfectly pulled shot of espresso? A perfectly pulled shot of espresso on demand. With a Nespresso VertuoPlus machine, you can make espresso shots, lungos, Americanos, macchiatos, and even cappuccinos in less time than you'll spend in the Starbucks drive-thru. Nespresso machines use special pods, just like a Keurig machine, and make smooth, rich espresso complete with a satisfying aroma and crema so thick you can practically stand on it. Just pop in a VertuoLine pod (available in countless flavors) and Nespresso VertuoPlus handles the rest. Home baristas can choose from one of five cup sizes to satisfy whatever caffeine craving they may have.

And for Amazon Prime Day, you can nab one of these gorgeous machines for up to $80. There are two Nespresso deals to choose from. There's the VertuoPlus Espresso Machine by Breville, which is a sleek, low-profile offering that would be at home on a counter in even tiny apartment kitchens or in sprawling office break rooms. If you opt for the VertuoPlus Coffee and Espresso Machine by De'Longhi, the machine comes with an Aeroccino device that steams and froths the milk at the push of a button, to unlock even more coffeehouse possibilities.

Whichever style you choose, both offerings come with 20 VertuoLine pods, so you can make tasty drinks right out of the box. Both are only available for Prime Day, so act quick before the deal – or supplies – run out.

Of course, if you want to take advantage of these deals and breathe a little easier, you'll need to be an Amazon Prime subscriber. You can sign up for a free 30-day trial if you haven’t tried the service yet.

Vertuo Plus Coffee and Espresso Machine by De'Longhi with Aeroccino, $151 (Was $233)