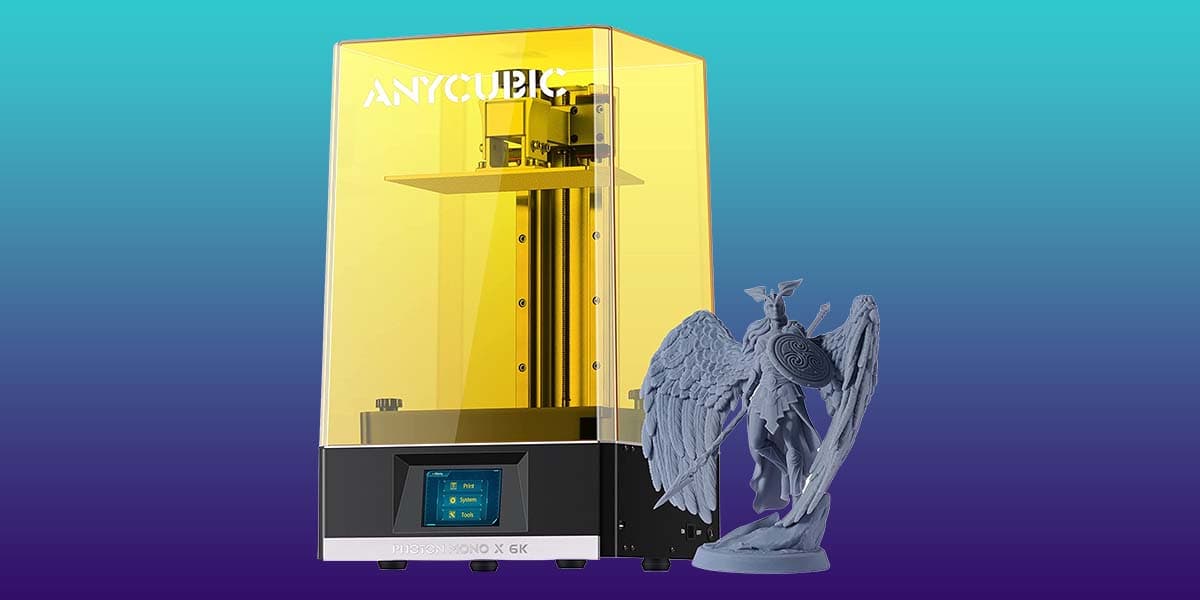 We're on day two of Amazon Prime Day, which means you have until the end of the day to save big on thousands of deals you'd be sorry to miss out on. If 3D printing is your passion, or you want to create some models, you can't go wrong selecting from the array of discounted printers in stock today.

Buying a 3D printer can often be a big investment, but with the ability to save hundreds on Prime Day deals, how could you resist? If last Prime Day you waited to purchase an item in hopes of finding a better deal, only to see the price jump back up on July 14, you know how "not-buyer's remorse" feels. Save yourself the hassle this year; Amazon Prime Day is one of the best times to get a great deal on a 3D printer.

To take advantage of the best Prime Day 2022 deals, subscribe to Amazon Prime. You can sign up for a free 30-day trial to make the most of the deals.

Make space for this all-in-one beauty of a machine. The Anycubic Mega-S is a 3D printer for experts and beginners alike, needing only three steps to assemble and start printing. This model is sturdy and efficient, thanks to a metal structure that minimizes shaking or wobbling. The Mega-S features a patented microporous coated heat bed that provides a strong adhesion to your creations while they print, and a quick, smooth removal once they've cooled.

There's few 3D printers out there that are this easy to use, with its simple and responsive touch screen, and the double-rod motor makes for a more efficient print than other clutch motors. The Mega-S also features a filament sensor, which notifies you if your printer is running low, pauses the print and allows you to refill to avoid wasted time and materials. This 3D printer is compatible with most filaments, making it even more universal. If you can't possibly wait to start printing your pieces, be sure to nab this printer while it's still 31 percent off this Prime Day.

When it comes to 3D printing, the possibilities are endless; but without a decent printer, your creativity can be severely limited. With the Creality Ender 3, you can be sure that every piece you make will be better than the last, and at a discount of 26 percent there's no better time than now to get this cool piece of tech. This printer comes partially assembled, making the most boring part (putting it together) relatively quick and easy. For its smaller size, this machine truly packs a punch and leaves enough space on your desk to display all of your creations.

Sometimes the unexpected can happen, which is why the Ender 3 has a resume printing function, allowing you to finish the job despite a power outage or other unforeseen halts. The Creality Ender 3 printer is also incredibly user-friendly and offers after-purchase, lifetime technical support, making it the ideal choice for beginners, kids (with adult supervision, as the hot bed may pose a hazard) and well-versed users alike. Its intuitive V-shaped design prevents clogs, bad extrusion, and allows for quietened usage. At nearly 25 percent off the original price, its impressive functionality and high print quality will have you wondering how you didn’t pay more.

You might have some pretty great ideas to try out and can’t wait to get your hands on a 3D printer, but if you have little ones who want to take a crack at it — or just aren’t ready to invest in a bigger, more expensive piece until you understand the basics — the WEEDO Mini 3D Printer may be your best choice (and at 40 percent off, too). The printer’s compact design (under 11 inches tall) makes it an easily portable tool that’s ready right out of the box; just plug it in and print.

The Mini printer’s proximity sensor allows for auto bed aligning, which is a win for those who are new to 3D printing as you won’t have to adjust the printing bed, and can simply sit back while the printer does its magic. This is another intuitive printer that incorporates a resume printing function, so if there are any disruptions, you can pick up right where you left off. Finally, the low voltage, unheated print bed makes this a safer, preferred choice for kids (or clumsy adults).

If you’re considering digging a little deeper into your pockets, the Anycubic Photon Mono X 6K has to be your top choice for a 3D printer. Though more expensive than previous mentions, this piece of technology is 38 percent off for a limited time only, and is built to last, so you won’t be making this a regular purchase. As a larger investment piece, this printer may be a better option for those with some printing experience, but the ease of use doesn’t completely exclude budding 3D printers either.

For the tech wizards who have a pretty good grasp of the ins and outs of 3D printing, you’ll be utterly impressed with the 6K resolution, ability to print at a larger volume, and the incredibly reduced print time: one layer per second at top speed. The difference in the quality of prints is mountains beyond what a $200 printer can do, allowing for awe-inspiring detail. The Anycubic printer also boasts of its wide compatibility with most resins, so you can branch out in your choice of materials. Whatever you’re printing, this 3D printer is by far one of the best on sale this Prime Day.

Don’t let the irritating whir from a 3D printer stop you from creating your masterpiece. Voxelab’s Aquila 3D Printer prides itself on its quiet printing capabilities, maxing out at 50 decibels (which is quieter than your average electric toothbrush). This printer is slightly more upscale than some of the others offered this Prime Day, and lucky for you, it's 27 percent off today. Weighing in at just under 22 pounds, the extra weight is put to good use with an all-metal body, V-profile, and a user-friendly colored screen with a rotary knob, its sleekness will make you feel like a seasoned printer.

This is a great option for those who have had some practice and are a little more confident in their 3D printing abilities; the Aquila 3D features an open design, allowing you to modify and upgrade your equipment for a more personalized experience. It also features resume printing functions, fast heating, and its carbon-crystal silicon glass platform prevents your prints from warping. It’s a top-of-the-line model, so the discounted price is quite a pleasant surprise.