Here's a Timeline of How China's Viral Outbreak Spread Worldwide

This is how it spread from one city to the whole world. 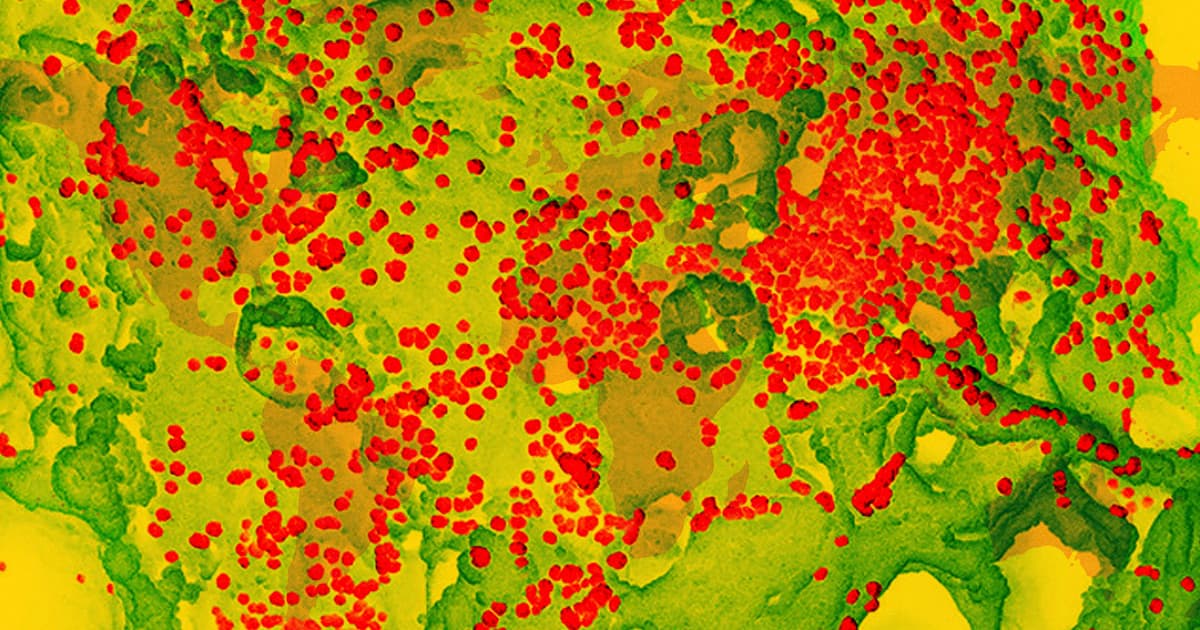 In December, a viral outbreak started in Wuhan, China and has since spread throughout the world — giving rise to fears of a global crisis.

The virus, originally dubbed 2019-nCoV and later officially named COVID-19, has remained mysterious. That's partially because China has worked to control the narrative and flow of information, and also because many milder cases likely flew under the radar. As the media has made sense of the looming pandemic, different outlets have sometimes provided conflicting information, even within the same day.

To make sense of COVID-19's spread throughout and beyond China, here's our distilled timeline of the deadly, pneumonia-like disease's progression.

December 27, 2019: Officials in Wuhan, China announce that 27 residents, mostly stallholders at the city's Huanan Seafood Market, have fallen ill with a mysterious virus.

January 3, 2020: After a week of radio silence and accusations of censorship, Wuhan officials say they've identified 44 patients infected with the virus. Five suspected cases emerge in Hong Kong. Wuhan officials rule out the possibility that the virus could be influenza, avian influenza, or a long list of common respiratory diseases.

January 5, 2020: The virus has now spread to 59 people in Wuhan and the number of suspected cases in Hong Kong grows to 21. Experts rule out the possibility that the virus is a resurgence of SARS.

January 10, 2020: A man in Wuhan infected by the virus becomes the first known patient to die from the virus.

January 13, 2020: The virus spreads to Thailand, marking the first confirmed case outside of China.

January 17, 2020: A second case in Thailand is confirmed. The World Health Organization (WHO) issues a statement saying little is known about the novel virus — but that more international cases are likely. A second Wuhan resident dies.

January 19, 2020: China now has 198 confirmed cases of the virus, 126 in Wuhan. Chinese President Xi Jinping gives his first public address about the outbreak on national TV. Scientists confirm that human-to-human transmission is possible.

January 21, 2020: The virus officially reaches the U.S. with one confirmed case in Washington State. It also appears in Singapore. China has nearly 300 confirmed cases. Six people have died.

January 22, 2020: China suspends all travel out of Wuhan, effectively placing the city under quarantine. There are nearly 600 confirmed cases worldwide: 444 in Wuhan, 26 in Guangdong, 14 in Beijing, and nine in Shanghai, in addition to the cases outside of China. Hundreds more, including what would be the first in Mexico, are suspected. Preliminary research suggests the virus may have originated in snakes, but some experts contest the finding. Seventeen people have died. An unconfirmed case of 2019-nCoV is reported in Brazil.

January 23, 2020: A case in Chicago is confirmed. China places three more cities under travel lockdown. The WHO decides it's too early to declare a global public health emergency. An eighteenth patient dies. Beijing cancels its New Year's festivals to discourage travel and tourism. The virus reaches Vietnam and Macau.

January 24, 2020: China quarantines eight more cities in the Hubei Province, trapping 35 million residents in their cities. CNBC reports that the death toll has climbed to 41, and the total number of infected has risen to 1,287 people in 12 countries. All fatal cases have still occurred within China. Throughout America, 63 unconfirmed cases are under investigation. The virus has spread to Nepal and two more cases in Singapore are confirmed. Late on Friday, France confirmed its first two cases — the first appearance of 2019-nCoV in Europe.

January 25, 2020: Hong Kong now has five confirmed cases, and authorities cancel school and public events until mid-February, declaring the highest level of emergency. A case of 2019-nCoV is confirmed in Australia, the first in Oceania. France announces that a third case, described by officials as being related to one of the previous two, has emerged. Malaysia confirms three cases.

January 26, 2020: There are now more than 1,300 cases of 2019-nCoV globally. Shantou becomes the first city in China to be placed under a partial lockdown despite not being located near the viral epicenter. Travel bans now affect 56 million Chinese residents. An unconfirmed case appears in the Republic of Côte d’Ivoire in Africa, meaning 2019-nCoV has likely appeared on every populated continent. The death toll has reached 56 people, the BBC reports.

January 28, 2020: The total number of confirmed cases worldwide rises to 4,769, with 6,972 more under investigation. 106 people have died in China, but there are still no coronavirus-linked deaths in other countries. Thailand becomes the first country other than China to confirm more than ten cases.

January 29, 2020: The virus has now spread to Finland and The United Arab Emirates. American officials announce plans to fast-track the development of a potential vaccine. There are now 6,172 confirmed cases worldwide. China has confirmed 6,090 cases and reports 133 fatalities.

January 30, 2020: The World Health Organization declares the outbreak a “public health emergency of international concern.” The first case of person-to-person transmission in the U.S. is reported. The unconfirmed case in Brazil is revealed to have been a hoax, meaning there are no actual reports of 2019-nCoV in South America. Both India and the Philippines confirm their first cases of the coronavirus. Italy confirms its first two cases. A team of German doctors publish a letter describing a coronavirus case transmitted from someone who had not yet developed any symptoms. The U.S. State Department restricts all non-essential travel to China, and multiple airlines suspend flights. The virus has now infected 7,926 people worldwide and killed 170 people in China.

January 31, 2020: The CDC announces that it will quarantine 195 U.S. citizens who fled China for two weeks. The virus spreads to England, Sweden, and Russia. Chinese health officials warn that the antibody response to coronavirus may not be strong enough to keep recovered patients from contracting the disease a second time. There are now 9,937 confirmed and 15,238 suspected cases worldwide, and the death toll rises to 213 fatalities.

February 1, 2020: For the first time, a 2019-nCoV-linked fatality is reported outside China, when a woman from Wuhan dies during a trip to the Philippines. The Filippino government announces a broad travel ban. Massachusetts reports its first case, as do Spain and South Australia. There are now 260 confirmed deaths in total and 11,791 confirmed cases worldwide.

February 2, 2020: Doctors in Bangkok report that they successfully treated a small number of patients with an aggressive cocktail of anti-HIV and flu drugs. There are now 17,388 cases worldwide and the death toll reaches 305.

February 4. 2020: Hong Kong officials report their first virus-linked death, the second to occur outside of mainland China. Including the death in Hong Kong, 65 fatalities were reported today — the greatest day-to-day increase thus far — bringing the global total to 427. Belgium confirms its first case. There are now 20,708 confirmed cases worldwide.

February 5, 2020: Wisconsin reports its first case, which is the 12th in the U.S. About 3,700 passengers and crew remain stranded off the coast of Japan on a cruise ship after 11 tested positive for the coronavirus. The total number of confirmed cases passes 25,000, and the death toll reaches 493 fatalities. The number of reported recoveries approaches 1,000.

February 6, 2020: The Chinese government orders officials in Wuhan to go door-to-door and round up the sick, who are to be quarantined in makeshift shelters and hospitals. There are now 28,364 confirmed cases worldwide and 566 fatalities.

February 7, 2020: After hours of conflicting reports, Wuhan Central Hospital confirms that Li Wenliang, a Wuhan-based doctor who was one of the first to warn about the then-emerging viral outbreak, died from a coronavirus infection early in the morning. The WHO ships medical supplies like medical masks and coronavirus tests to countries affected by the outbreak. The cruise ship off the coast of Japan now reports 61 confirmed cases. The government of Singapore elevates its risk assessment level. There are now 31,533 confirmed cases and 639 fatalities worldwide, and 1,564 people have recovered.

February 8, 2020: There are now 725 fatalities, surpassing the total global death toll of the SARS outbreak in the early 2000s. The first American fatality occurs in a hospital near Wuhan. The Chinese government approves foreign aid from the WHO.

February 9, 2020: There are now 70 confirmed cases on the “Diamond Princess” cruise ship off the coast of Japan. Officials have confirmed 40,171 cases and 829 fatalities worldwide.

February 10, 2020: WHO Director-General Tedros Adhanom Ghebreyesus warns that cases of the coronavirus not linked to recent China travel are a troubling sign for containment efforts. Japan reports 65 new cases, all of which are on the stranded cruise ship, bringing the ship’s total to 135. There are now 40,632 cases and 910 fatalities worldwide.

February 13, 2020: Japan announces its first outbreak-related fatality, making it the third region outside of mainland China to do so. Chinese officials begin counting cases and fatalities that were diagnosed by a doctor but not yet confirmed by a test in their official tallies. As a result, they announce a massive spike in both counts. Unconfirmed reports suggest that the outbreak has spread to North Korea, though the number of cases is unknown. The number of confirmed infections jumps to 60,412, and the death toll rises to 1,370.

February 14, 2020: China only reports 14 fatalities and there are only about 4,000 new confirmed cases worldwide, suggesting that the numbers are balancing out after the February 13 shift in reporting guidelines. Egyptian officials confirm the country’s first case.

February 17, 2020: There are now 454 confirmed cases on the Diamond Princess, including 14 Americans who were evacuated from the ship. There are now 71,449 cases and 1,775 confirmed fatalities worldwide.

February 19, 2020: Iran confirms its first two infections — and that both patients died. Hong Kong also reports its second fatality. There are now 75,304 cases and 2,014 fatalities worldwide.

Editor's Note 1/27/2020: This article was updated with additional information. We'll continue to update it as the story develops.

More on COVID-19: Here's The Growing Coronavirus Death Toll in One Chilling Graph