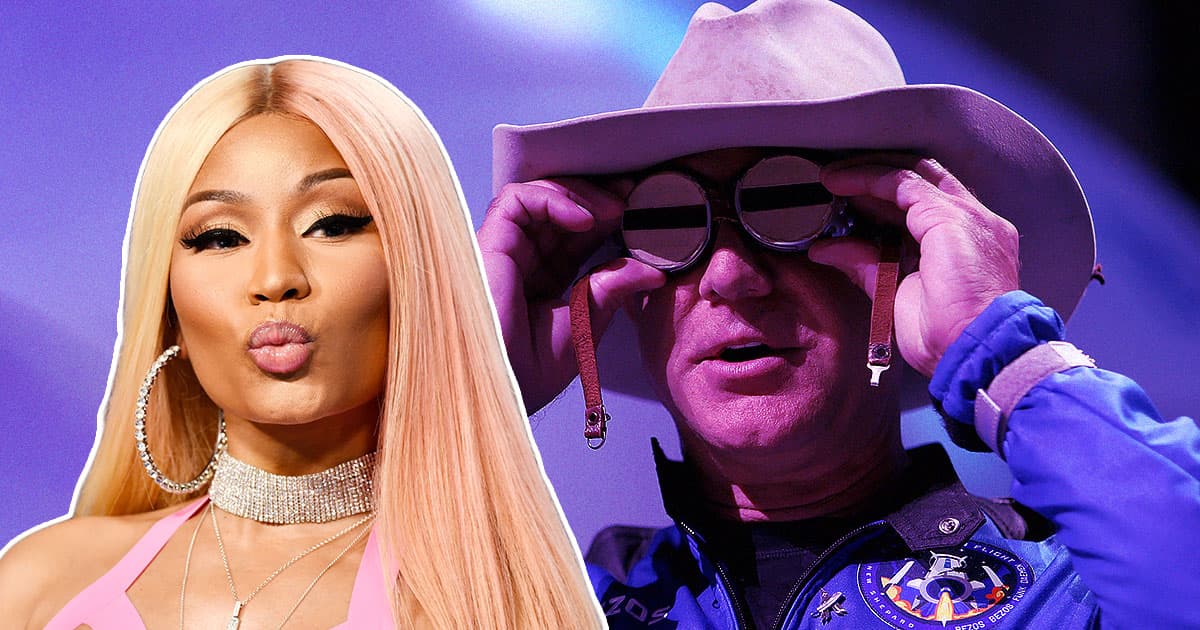 What could they possibly be texting about?!

What could they possibly be texting about?!

The self-appointed Queen of Rap is back — and has a new texting friend to boot.

In her new single with freshman rapper Coi Leray titled "Blick Blick," Nicki Minaj offers up her usual fare, but with a fun Easter egg that references the Amazon kingpin himself.

At one point during her verse, Minaj gloats that she's been "textin' with Jeff Bezos (Bezos)," which both serves the image of her as an A-lister and also possibly references the (somewhat raunchy but mostly romantic) texts the Blue Origin CEO sent to his mistress Lauren Sanchez in 2019, when he was still married.

It's doubtful that Minaj, née Onika Tanya Maraj, is Bezos' new "alive girl" given both that she's married to and seems mighty supportive of a convicted sex offender. And also, that the Amazon executive chairman and Sanchez recently went on a romantic eco-getaway to Colombia to learn about deforestation.

when jeff bezos give nicki minaj free shares in amazon >

The Trini of It All

Another potential damper into this alleged friendship stems from the last time Minaj crossed over into Futurism's beat, when she infamously claimed that a third-degree connection to her in her home country of Trinidad and Tobago got an impotency-causing testicular infection from the COVID-19 vaccine. Unsurprisingly, there was no evidence that such a person or infection had occurred.

Then again, Bezos may not be that concerned about Minaj's anti-vax rhetoric given that last year, Amazon's charitable arm gave more than $42,000 to anti-vax charities, per a tax review by none other than the Washington Post, which he also owns. Though that's chump change for the man who's worth a whopping $178.9 billion dollars, it's not nothing — though he and Blue Origin have also given hundreds of millions to COVID relief, at very least.

If Minaj and Bezos really are in cahoots, we want more than anything to know what they discuss. What would these two bizarre, divisible celebrities have to talk about? The possibilities, truly, are endless.

Deadly Delivery
Amazon Wouldn't Let Driver Stop Deliveries as Tornado Struck
12. 17. 21
Read More
Phone It In
Amazon Under Fire for Workplace Cell Phone Ban After Deadly Warehouse Collapse
12. 13. 21
Read More
Sympathy for the Devil
Vegan Anti-Vaxxer Dies of COVID After Opposing Vaccine Animal Testing
11. 29. 21
Read More
+Social+Newsletter
TopicsAbout UsContact Us
Copyright ©, Camden Media Inc All Rights Reserved. See our User Agreement, Privacy Policy and Data Use Policy. The material on this site may not be reproduced, distributed, transmitted, cached or otherwise used, except with prior written permission of Futurism. Articles may contain affiliate links which enable us to share in the revenue of any purchases made.
Fonts by Typekit and Monotype.