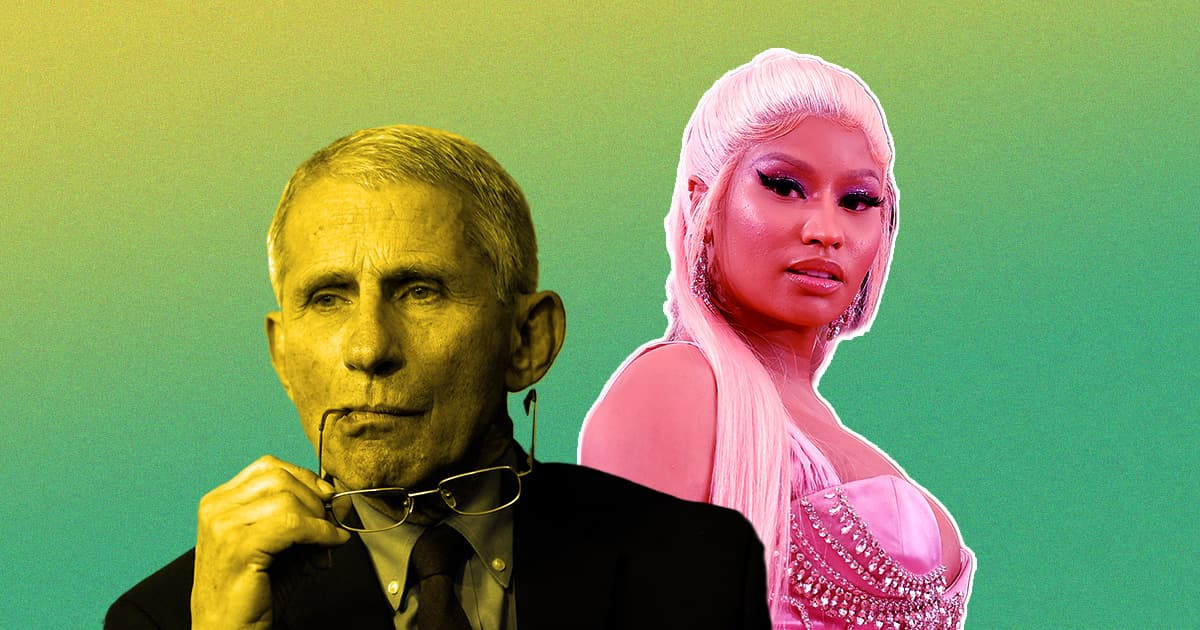 Rapper Nicki Minaj claimed on Twitter this week that her cousin in Trinidad "won’t get the vaccine cuz his friend got it [and] became impotent."

"His testicles became swollen," she added, evocatively. "His friend was weeks away from getting married, now the girl called off the wedding."

All told, it's a bit of a COVID-19 misinformation disaster. Nicki Minaj has a massive following, with 22.6 million followers on Twitter alone.

The preposterous idea that a COVID vaccine led to those specific symptoms, which have not been observed by medical professionals in the very large global sampling of people who have already taken it, led to countless memes on social media — as well as some hilarious explainer articles.

But before anybody gets the wrong idea, top doc and infectious diseases specialist Anthony Fauci stepped in to give us a shot of much-needed sanity.

"There’s no evidence that it happens, nor is there any mechanistic reason to imagine that it would happen," Fauci told CNN in a televised interview, after being asked about Minaj's bizarre comments.

"So the answer to your question is no," he concluded.

There we have it: Fauci with the truth bomb. Most, if not all, other scientists agree. For instance, the Centers for Disease Control and Prevention points out in an August update on its website that COVID-19 vaccines don't "cause fertility problems in women or men."

Fauci also touched upon a much wider — and more serious — issue.

"There's a lot of misinformation, mostly on social media, and the only way we know to counter mis- and disinformation is to provide a lot of correct information," he said.

"And to essentially debunk these kinds of claims, which may be innocent on her part," he added. "I'm not blaming her for anything but she should be thinking twice about propagating information that really has no basis."

In subsequent tweets, Minaj revealed that she will only get vaccinated "once I feel I've done enough research. I’m working on that now."

Fortunately, her messaging did include some tangible and useful tips.

"In the meantime my loves, be safe," she wrote. "Wear the mask with 2 strings that grips your head [and] face. Not that loose one."

And needless to say, if you or your loved one's testicles have become swollen, for the love of God please go see a doctor.