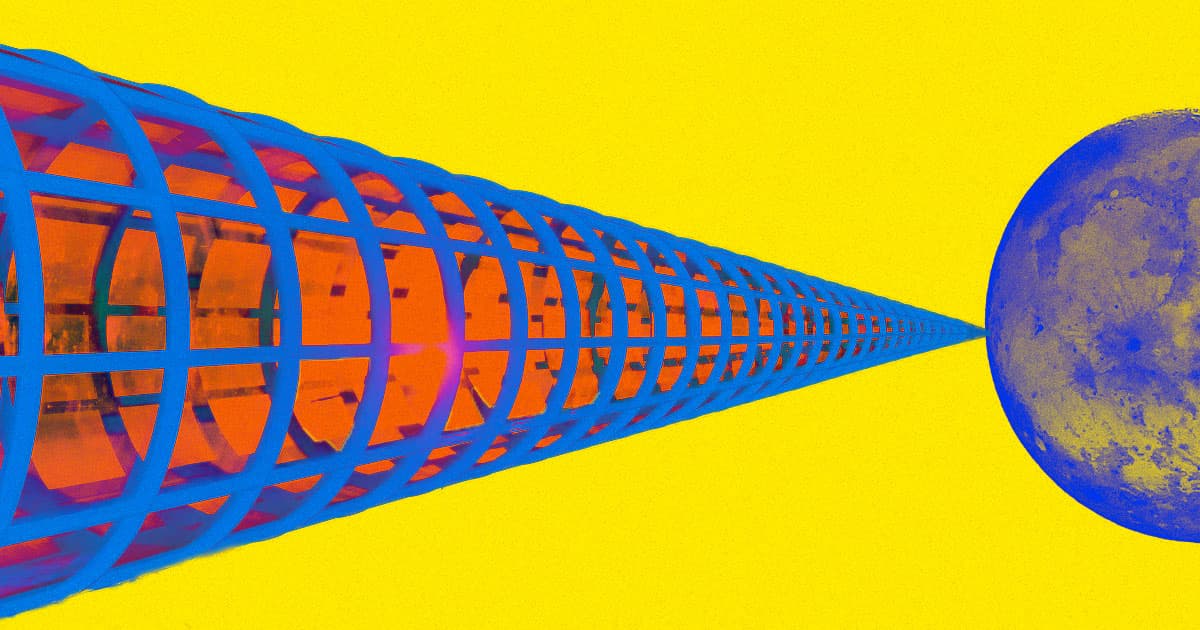 It would be much easier to escape Earth’s gravity if you could skip the energy-intensive rockets.

That’s the idea behind the Spaceline, a newly-proposed type of space elevator that would link the Earth and the Moon in a bid drastically cut the cost of space travel.

Zephyr Penoyre, one of the Columbia astronomy graduate students behind the Spaceline, told Futurism that “the line becomes a piece of infrastructure, much like an early railroad — the movement of people and supplies along it are much simpler and easier than the same journey in deep space.”

Earth-based space elevators would be too taxing for any existing material — Earth’s stronger gravitational pull and rotation speed would snap the cable before it could be completed. But the risk of a catastrophic collapse, the researchers say, is lower when the cable is only tethered to the Moon. Throughout the paper, Penoyre and Cambridge astronomy graduate student Emily Sandford often noted that carbon nanotubes would be the best material to use, but they can’t yet be built to scale.

Based on the calculations in the paper, it seems that several existing materials could be up for the challenge — it’s just a matter of finding the strongest thing that can be made at scale.

“That’s a good way to put it. Only thing to add is that it also needs to be able to survive well in deep space,” Penoyre said. “I have briefly looked into this, but am no expert in materials science. I often used Dyneema as an example material in calculations and it has some pretty good properties.”

As for the line itself, the researchers investigated a number of shapes, ultimately arriving at a cable that was extremely narrow at either end so it didn’t collapse under gravitational pressure but thickened at the middle to prevent snapping. At this stage, the astronomers didn’t factor in space debris collisions in near-Earth orbit, but Penoyre pointed out other projects that had grappled with the challenge.

“Think of the early Antarctic basecamps, at first there might only be three engineers up there at any one time, but unlike low Earth orbit the Lagrange point is the perfect place to build,” said Penoyre. “We could (indulging in a little imagination) picture prefabricated panels being sent up the line, and assembled into an ever-growing colony. I was amazed to find that there are now thousands of people living a significant part of the year in Antarctica — eventually the same could be true of the Lagrange point.”

Read This Next
BDE
Elon Musk Just Said That Jeff Bezos “Can’t Get It Up”
Going Up, Going Down
Professor Says We Could Already Build a Floating Space Elevator
Put Me on the List
Ridiculous Analysis Claims You Could Build a House on the Moon for $60 Million
Buckle Up
This Is What It Would Be Like to Ride Starship During Its Epic “Belly Flop” Maneuver
Different Strokes
Former NASA Leader Says SpaceX Should Build NASA’s Moon Rocket
More on Off World
Look Out Below!
4:28 PM on the byte
Chinese Deathrocket Expected to Crash Land on Saturday
Check Out The New...
2:59 PM on the byte
NASA Mars Helicopter Completes One-Way Flight to New Home Base
Martian Mushrooms
Yesterday on the byte
The Mars Mushrooms Are Probably Fake, But Organisms Could Likely Survive on the Red Planet
READ MORE STORIES ABOUT / Off World
Keep up.
Subscribe to our daily newsletter to keep in touch with the subjects shaping our future.