"The Moon flies through Earth's atmosphere." 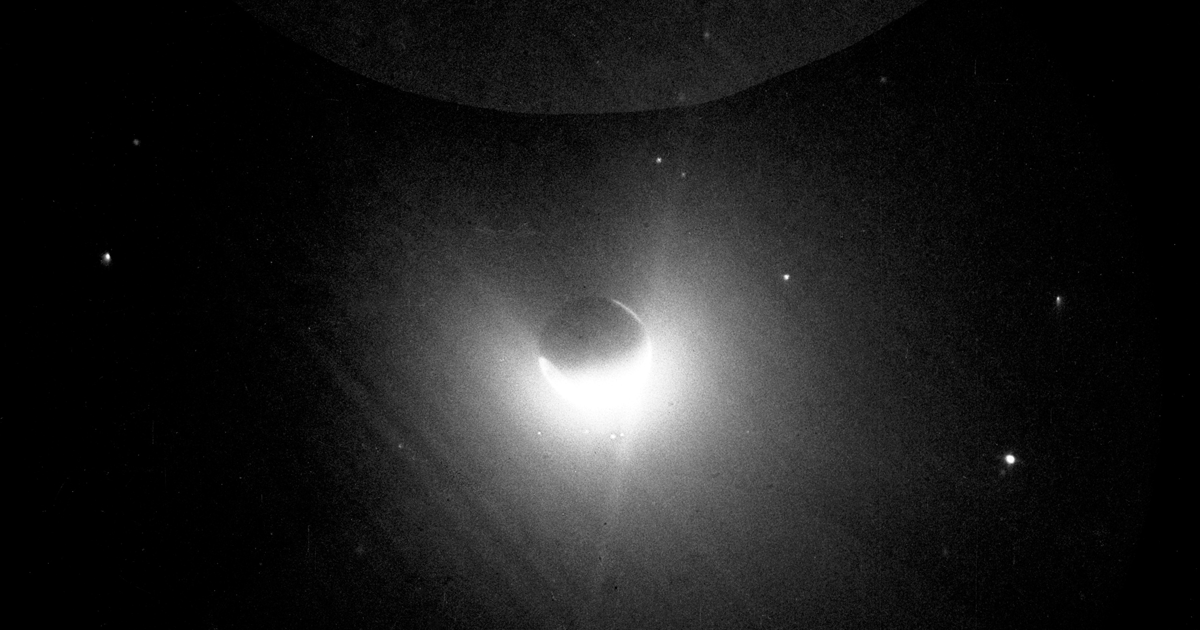 A light layer of hydrogen atoms called the geocorona separates Earth's atmosphere from outer space. And it extends far beyond Earth — much farther than previously believed.

Data collected by NASA and the European space agency's Solar and Heliospheric Observatory (SOHO), a spacecraft that launched in 1995 to study the Sun, suggests that this gaseous layer extends up to 391,000 miles (630,000 km) from Earth — which, strikingly, is 50 times Earth's diameter and almost twice the distance to the Moon.

And that's a big deal, because planets with traces of hydrogen in their atmospheres have a much higher chance of containing water on the surface.

"This is especially interesting when looking for planets with potential reservoirs of water beyond our Solar System," explained Jean-Loup Bertaux, co-author of the paper on the new research and former principal investigator at ESA, in an official press release.

Unfortunately, those extra hydrogen atoms won't be particularly useful for future missions to the Moon.

"On Earth we would call it vacuum, so this extra source of hydrogen is not significant enough to facilitate space exploration," said Igor Baliukin of Russia's Space Research Institute and lead author of the paper.

But they could make future astronomical observations more accurate by allowing astronomers to take the hydrogen atoms and their associated ultraviolet wavelengths into account.

The revelation symbolizes a big win for the SOHO team. "This discovery highlights the value of data collected over 20 years ago and the exceptional performance of SOHO," said Bernhard Fleck, SOHO project scientist at ESA.

READ MORE: Earth's atmosphere stretches out to the Moon — and beyond [ESA]

Read This Next
Expect Delays
Scathing Report Admits NASA Is Years Behind Moon Landing Schedule
Astronaut Drip
We Just Got the First Peek at NASA's Artemis Moon Landing Suits
Moonwalk Drip
NASA Inks Deals for Moonwalking Suits for Artemis Landings
Ice Ice Baby
Check Out This Moon-Shaped Ice Crystal on the Space Station's Window
Weredata
Startup Announces Plans to Bury Server Farm on the Moon
More on Off World
Rolling Coal
Yesterday on futurism
Space Travel Will Absolutely Gut the Environment, Scientists Warn
Carbon-Based
Tuesday on futurism
NASA Rover Finds New Potential Evidence for Ancient Life on Mars
Gifts For Mom
Tuesday on the byte
Jeff Bezos Ditches Plan to Land Rockets on Ship Named for His Mom
READ MORE STORIES ABOUT / Off World
Keep up.
Subscribe to our daily newsletter to keep in touch with the subjects shaping our future.
+Social+Newsletter
TopicsAbout UsContact Us
Copyright ©, Camden Media Inc All Rights Reserved. See our User Agreement, Privacy Policy and Data Use Policy. The material on this site may not be reproduced, distributed, transmitted, cached or otherwise used, except with prior written permission of Futurism. Fonts by Typekit and Monotype.