New Idea to Land Heavy Payloads on Mars: Dive, Then Turn Nose Up

Please put your seatbacks and tray tables in upright position. 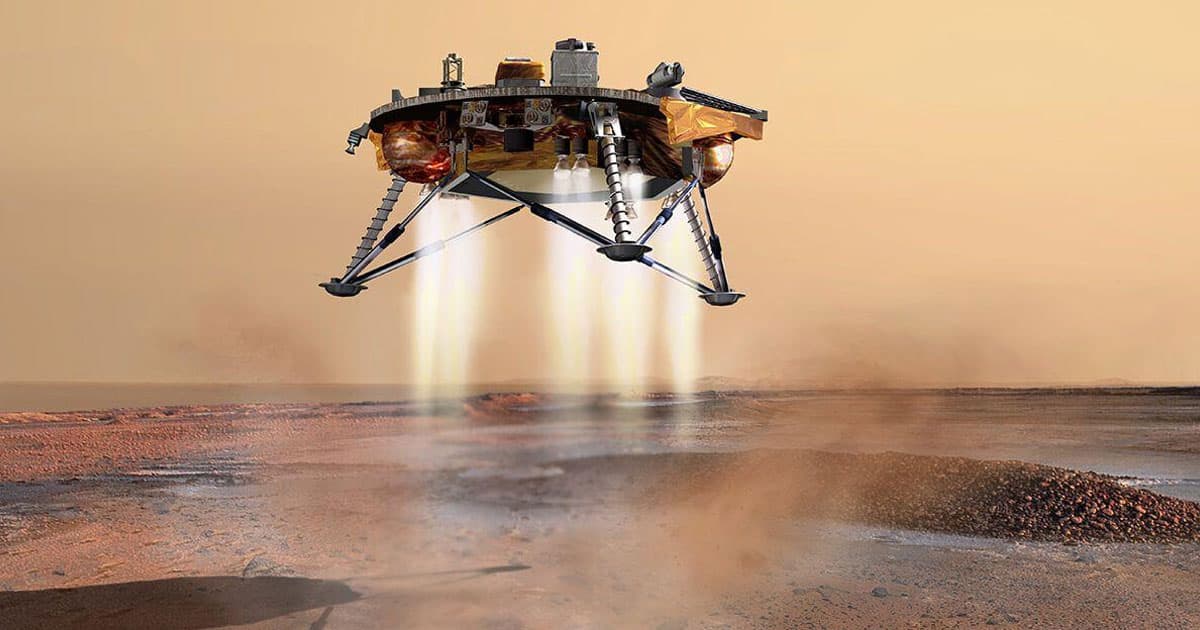 Landing a spacecraft on the surface of Mars is a Herculean task. Payloads reach hypersonic speeds as they heat up while entering the Martian atmosphere — the reason scientists have referred to it as the "seven minutes of terror."

Many spacecraft have slowed their descents to Mars using large parachutes. But landing heavier spacecraft on the Red Planet, like those with a human crew, will pose new engineering challenges, according to new research — and a potential solution could involve a harrowing nose dive.

"Unfortunately, parachute systems do not scale well with increasing vehicle mass," said assistant professor in the Department of Aerospace Engineering at the University of Illinois Zach Putnam in a press release. "The new idea is to eliminate the parachute and use larger rocket engines for descent."

The paper Putnam co-authored about optimizing the trajectories that Mars landers should take on descent was published in the Journal of Spacecraft and Rockets.

There's another issue that comes along with larger rockets: more valuable space used up by additional rocket fuel. And that's space that could be used for scientific instruments or even human passengers.

Luckily, there might be a middle ground: pre-determined trajectories could minimize the need for massive parachutes or giant tanks of additional propellants to fire descent system rockets.

To pull that off, the vehicle would have to dive down, then turn its nose up just at the right time to fly over the Martian surface at a low altitude.

"This enables the vehicle to spend more time flying low where the atmospheric density is higher," Putnam said. "This increases the drag, reducing the amount of energy that must be removed by the descent engines."

Read This Next
A Sip of Opal
NASA Discovers Precious Gemstones on Mars
Martian Oases
Scientist Proposes Growing a Forest Inside a Bubble on Mars
Big Impact
Meteorite Hit Mars So Hard NASA Thought It Was a Quake
Palliative Care
NASA's Mars Lander Refuses to Die Even Though It's Supposed To
Signs Of Life
NASA Seems Awfully Excited About Finding Organic Matter on Mars
More on Off World
Lonely Planet
Yesterday on futurism
Scientists Find Nearby Planet the Same Size of Earth, Plan to Search It for Life
Take Cover
Feb 4 on the byte
Space Startup Blows Up Another Giant Inflatable Space Station Module
Rock Blast
Feb 4 on the byte
Scientists Say There's an Upside to Those Rocks That Keep Bludgeoning the James Webb
READ MORE STORIES ABOUT / Off World
Keep up.
Subscribe to our daily newsletter to keep in touch with the subjects shaping our future.
+Social+Newsletter
TopicsAbout UsContact Us
Copyright ©, Camden Media Inc All Rights Reserved. See our User Agreement, Privacy Policy and Data Use Policy. The material on this site may not be reproduced, distributed, transmitted, cached or otherwise used, except with prior written permission of Futurism. Articles may contain affiliate links which enable us to share in the revenue of any purchases made.
Fonts by Typekit and Monotype.