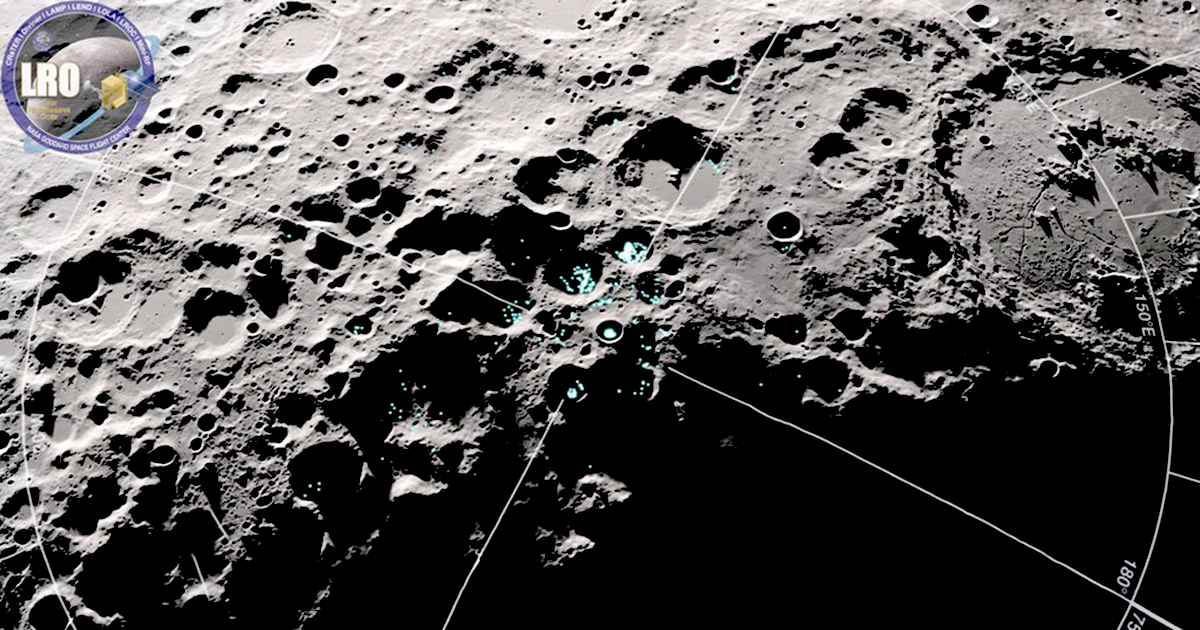 NASA's Lunar Reconnaissance Orbiter (LRO) just spotted "moving water molecules" on the near side of the Moon — which could be a big deal for future human missions to the Moon.

Scientists observed water molecules moving around as the lunar surface heated up during the Moon's day cycle. Researchers had previously assumed that the main source of water — hydrogen ions from solar wind — would be cut off when the Earth travels between the Moon and the Sun. But the new findings didn't see any decrease when the Earth cut off solar wind to the Moon, suggesting that it could harbor a more sustainable source of water than previously believed.

The discovery is described in a paper published in the journal Geophysical Research Letters by researchers from the John Hopkins Applied Physics Laboratory and NASA's Goddard  Space Flight Center in Maryland. The data was collected by the LRO's Lyman Alpha Mapping Project (LAMP), an ultraviolet spectrograph that was built to map ultralight wavelength reflections on the lunar surface.

"This is an important new result about lunar water, a hot topic as our nation's space program returns to a focus on lunar exploration," said Kurt Retherford, principal investigator of the LAMP instrument from Southwest Research Institute in San Antonio, Texas, said in a statement. "We recently converted the LAMP's light collection mode to measure reflected signals on the lunar dayside with more precision, allowing us to track more accurately where the water is and how much is present."

This year's results discovered by LAMP seem to underline that the lunar water cycle could make water far more accessible to us during future missions to the Moon than we previously thought — the more water already exists on the Moon, the less time and resources we have to spend in trying to get it there.

Read This Next
Moon Wrestling
The Head of NASA Is Scared Chinese Astronauts Will Seize Portions of the Moon
Next Time
NASA Cancels First Launch Attempt of Uber Expensive Moon Rocket
Back to the Moon
NASA: SpaceX Only Has to Prove It Can Land Astronauts on Moon, Not Bring Them Home Again
Moon Vacation
NASA Finds Holes on the Moon Where It's Always a Comfortable Temperature
Expect Delays
Scathing Report Admits NASA Is Years Behind Moon Landing Schedule
More on Off World
Final Selection
Yesterday on the byte
NASA Finalizing Secretive Decision on First Astronauts for the Artemis Moon Mission
Hall Effect
Jan 29 on futurism
Test Suggests Ion Thrusters Could Power Crewed Interplanetary Missions
CHON: Legacy
Jan 29 on the byte
James Webb Discovers Coldest Ice in Known Universe, Harboring Molecules Essential For Life
READ MORE STORIES ABOUT / Off World
Keep up.
Subscribe to our daily newsletter to keep in touch with the subjects shaping our future.
+Social+Newsletter
TopicsAbout UsContact Us
Copyright ©, Camden Media Inc All Rights Reserved. See our User Agreement, Privacy Policy and Data Use Policy. The material on this site may not be reproduced, distributed, transmitted, cached or otherwise used, except with prior written permission of Futurism. Articles may contain affiliate links which enable us to share in the revenue of any purchases made.
Fonts by Typekit and Monotype.