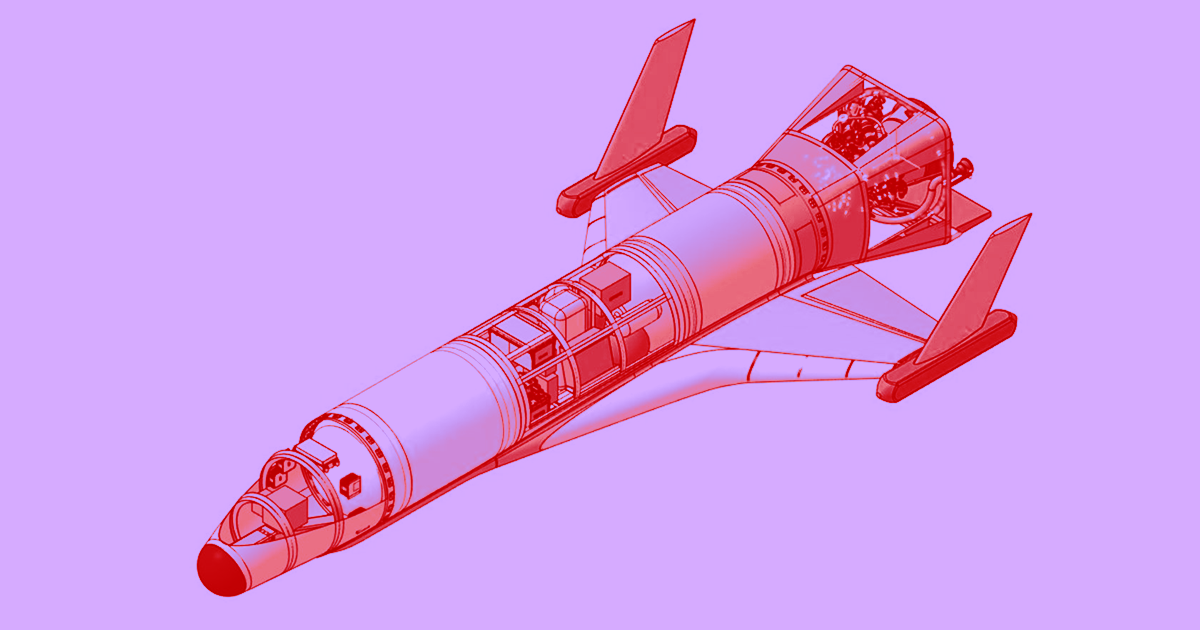 The aircraft will be outfitted with a single Briz-M upper stage engine — a Russian space rocket that's been in use since 2000 — and is designed to fly at altitudes of up to 99 miles (160 kilometers) and speeds of up to Mach 7 (5,370 mph) according to RIA Novosti.

The drone is designed to be reusable, with a lifespan of at least 50 flights.

A Russian company called "ISON" will be building the spacecraft on behalf of Roscosmos. The project received millions of rubles in funding from national research foundations. According to Yuri Bakhvalov, general director of ISON, all components will be manufactured and assembled in Russia, RIA Novosti reports.

Schematics provided by ISON show that the drone will first be carried skyward by a special aircraft. The drone will then accelerate near-vertically to enter space. It'll return to Earth with a parachute.

The plans are reminiscent of Virgin Galactic's White Knight Two system, which carries its spacecraft VSS Unity to an altitude of 50,000 feet first before it takes off. Virgin's VSS Unity reached a record apogee of 51.4 miles (82.7 km) in December.

It's not the only Russian hypersonic aircraft in the works. The CEO of Russian aircraft corporation MiG revealed plans in August 2018 for a different hypersonic military jet that can reportedly enter space as well — though experts are skeptical that it will be ready before 2035 to 2040, Business Insider reports.

Five test flights are already planned for the unnamed uncrewed hypersonic spacecraft in 2023. But we will have to wait and see — we haven't seen any photos yet.

READ MORE: Russia's next drone will fly at hypersonic speeds and into space: media [South Front]

Editor's Note 2/5 at 9:45am EST: A previous version of this story incorrectly stated that Russia's new spacecraft will be its first foray into uncrewed space travel. In reality, Russia has launched a number of uncrewed space missions in the past. The story has been updated to correct the error.

Read This Next
Sabers Rattled
Russia Issues Veiled Threat to Shoot Down Pesky SpaceX Satellites
Sad ROSS
Russia's New Space Station Gets Sadder the More We Hear About It
Buh Bye
Russia Says It's Definitely Quitting the ISS But Doesn't Say When Exactly
Don't Let the Door Hit You
Russian Space Chief Leaving Post, May Be Headed to War Zone
Gone Girl
Rumors Swirl That the Deranged Head of the Russian Space Program Is Getting Fired
More on Off World
Cubesat Death
Yesterday on the byte
Another Satellite Released by NASA's Artemis I Just Croaked
Kilonova Blast
Yesterday on futurism
Staggering Galactic Explosion Blamed on Black Hole Collision
Little Boxes
Yesterday on futurism
One Silly Little Detail Is Reportedly Delaying Artemis II by Years
READ MORE STORIES ABOUT / Off World
Keep up.
Subscribe to our daily newsletter to keep in touch with the subjects shaping our future.
+Social+Newsletter
TopicsAbout UsContact Us
Copyright ©, Camden Media Inc All Rights Reserved. See our User Agreement, Privacy Policy and Data Use Policy. The material on this site may not be reproduced, distributed, transmitted, cached or otherwise used, except with prior written permission of Futurism. Articles may contain affiliate links which enable us to share in the revenue of any purchases made.
Fonts by Typekit and Monotype.