"Maybe there's something beyond the space station." 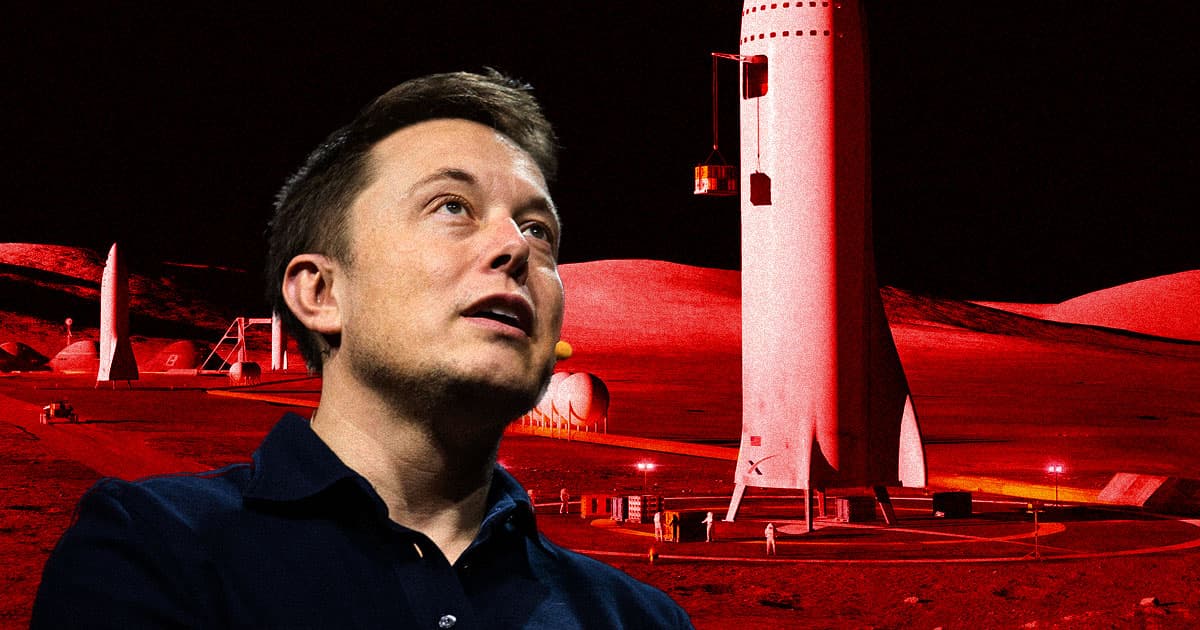 To the ISS and Beyond

"To be frank, I’m a little emotionally exhausted," Musk said at a post-launch press conference at four o'clock in the morning on Saturday. "Because that was super stressful. But it worked, so far."

The private space company has achieved a lot within the last 48 hours. Their futuristic passenger spacecraft Crew Dragon launched early Saturday morning from the Kennedy Space Center and successfully docked autonomously with the International Space Station some 26 hours later.

If all goes well, two astronauts will fly on board the spacecraft to the ISS as soon as July.

But, as expected, Musk has much bigger plans — for traveling to beyond Earth's orbit. "We should have a base on the moon, like a permanently occupied human base on the moon, and then send people to Mars," Musk said at the press event. "Maybe there's something beyond the space station, but we'll see."

Earlier this year, Musk admitted that he wanted to get to the Moon – and "as fast as possible," he wrote in a Jan 31 tweet.

The vehicle that could fulfill that dream: the stainless-steel monstrosity dubbed Starship. But getting Starship to the Moon will be a much harder feat to pull off than any NASA project ever.

"It won’t be easy for us or SpaceX," Walt Engelund, director of Space Technology and Exploration Directorate at NASA, told Business Insider in a February interview.

But one step at a time. "We've got to focus on getting [the Crew Dragon missions] right, for sure. That's the priority," Musk admitted at Saturday's press event.

"But then, after that, maybe something beyond low-Earth orbit."

READ MORE: Elon Musk says he would ride SpaceX's new Dragon spaceship into orbit — and build a moon base with NASA [Business Insider]

Read This Next
Moon Wrestling
The Head of NASA Is Scared Chinese Astronauts Will Seize Portions of the Moon
Shot Well
Head of NASA Relieved to Hear Elon Musk Isn't REALLY Running SpaceX
Makeover Scene
Space Tourist Says He's Thinking About Flying SpaceX Craft Up to Fix Hubble
Grain of Salt
There's a Huge Problem With Elon Musk's Promise to Bring Starlink to Iran
Sluggo Mode
SpaceX Has a Major Problem With Its Starlink Internet Connections
More on Off World
Heavy Metal
6:27 PM on the byte
NASA Mars Rover Finds Metallic Object That Smashed Down on Surface
Small But Mighty
5:44 PM on the byte
Baby Asteroid Photobombs James Webb On Accident
Little Guy
3:28 PM on the byte
Scientists Prototype "Creeping" Lizard-Like Robot for Exploring Mars
READ MORE STORIES ABOUT / Off World
Keep up.
Subscribe to our daily newsletter to keep in touch with the subjects shaping our future.
+Social+Newsletter
TopicsAbout UsContact Us
Copyright ©, Camden Media Inc All Rights Reserved. See our User Agreement, Privacy Policy and Data Use Policy. The material on this site may not be reproduced, distributed, transmitted, cached or otherwise used, except with prior written permission of Futurism. Articles may contain affiliate links which enable us to share in the revenue of any purchases made.
Fonts by Typekit and Monotype.