It's a historic moment for space travel. 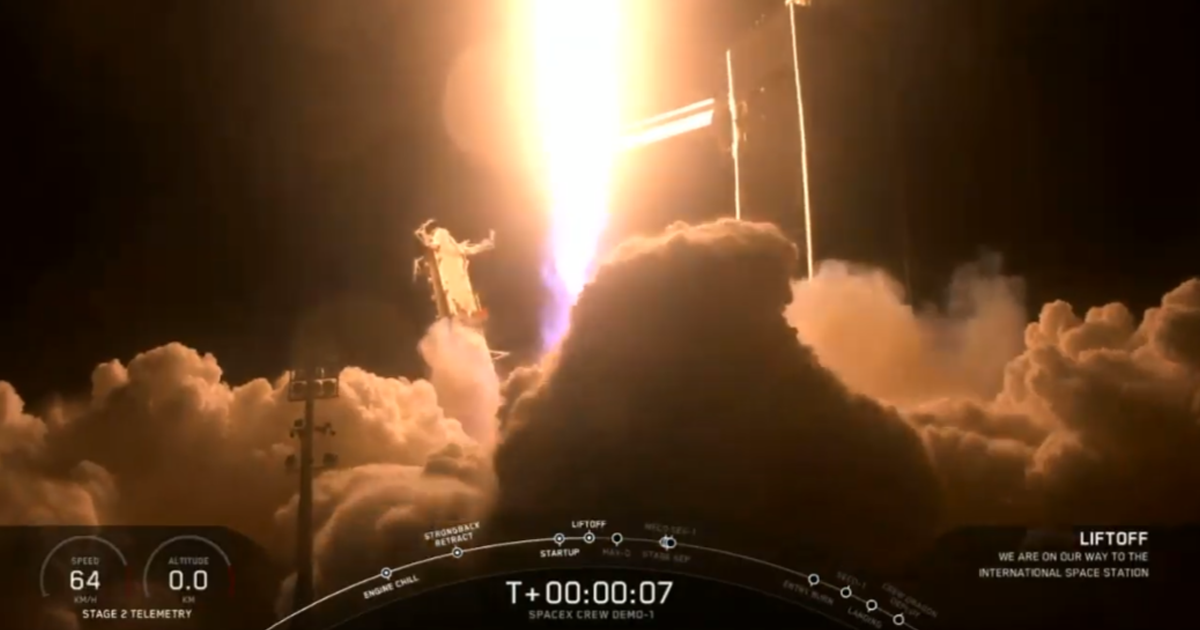 SpaceX successfully launched its Crew Dragon spacecraft on a Falcon 9 rocket from historic Launch Complex 39A at NASA's Kennedy Space Center in Florida at 2:49 am EST this morning. Main engine cutoff and stage separation were confirmed by SpaceX at 2:52 am EST. First stage successfully landed on the drone ship platform Of Course I Still Love You at 3:00 am EST.

The Crew Dragon is scheduled to dock with the International Space Station early Sunday morning. It will spend about five days docked to the station before returning to Earth and splashing down in the Atlantic.

The launch marks the first time a private American rocket and spacecraft built for human passengers has ever launched to travel to the space station. An upcoming crewed mission, Demonstration Mission 2, is scheduled for July.

SpaceX and @NASA have completed thousands of hours of tests, analyses, and reviews in preparation for Crew Dragon’s first test flight to the @space_station pic.twitter.com/JvJqeoLKVy

There are no human astronauts on board. It does carry "Ripley," a SpaceX dummy that will collect valuable information — using sensors all over its body — about what the experience will be like for human astronauts.

A previous version of SpaceX's Dragon capsule built solely for cargo became the first commercial spacecraft to deliver cargo to the ISS and safely return cargo back down to Earth back in 2012.

Since then, SpaceX has flown 16 successful cargo missions to the space station on behalf of NASA using the Dragon spacecraft.

If all goes well, the Crew Dragon will rendezvous with the International Space Station at around 6:00 am EST Sunday morning to dock autonomously.

But the docking procedure is quite different this time when compared to previous Dragon missions: "Dragon was basically hovering under the ISS," said Hans Koenigsmann, vice president of mission assurance at SpaceX during a pre-launch briefing on Thursday. "You can see how it moves back and forth and then the [Canadarm] takes it to a berthing bay."

In contrast, the Crew Dragon's docking system is active, he said: "it will plant itself in front of the station and use a docking port on its own, no docking arm required."

More on the launch: Meet “Ripley," the Dummy SpaceX Is Sending to the Space Station

Read This Next
Palliative Care
NASA's Mars Lander Refuses to Die Even Though It's Supposed To
Sluggo Mode
SpaceX Has a Major Problem With Its Starlink Internet Connections
Signs Of Life
NASA Seems Awfully Excited About Finding Organic Matter on Mars
Butt of the Joke
Asking the Public to Name Probe to Uranus May Have Been a Mistake
Mo' Money Mo' Problems
New Government Report Is Extremely Bad News for NASA
More on Off World
Stones Unturned
Yesterday on the byte
New Project Scanning Old Data for Signs of Alien Civilizations
Crossover Episode
Yesterday on the byte
NASA Aiming James Webb at Asteroid as DART Prepares to Smash It
Watery
Friday on the byte
Chinese Rover Discovers Evidence of Ancient Ocean on Mars
READ MORE STORIES ABOUT / Off World
Keep up.
Subscribe to our daily newsletter to keep in touch with the subjects shaping our future.
+Social+Newsletter
TopicsAbout UsContact Us
Copyright ©, Camden Media Inc All Rights Reserved. See our User Agreement, Privacy Policy and Data Use Policy. The material on this site may not be reproduced, distributed, transmitted, cached or otherwise used, except with prior written permission of Futurism. Articles may contain affiliate links which enable us to share in the revenue of any purchases made.
Fonts by Typekit and Monotype.