It's the first time an American spacecraft has docked autonomously to the station. 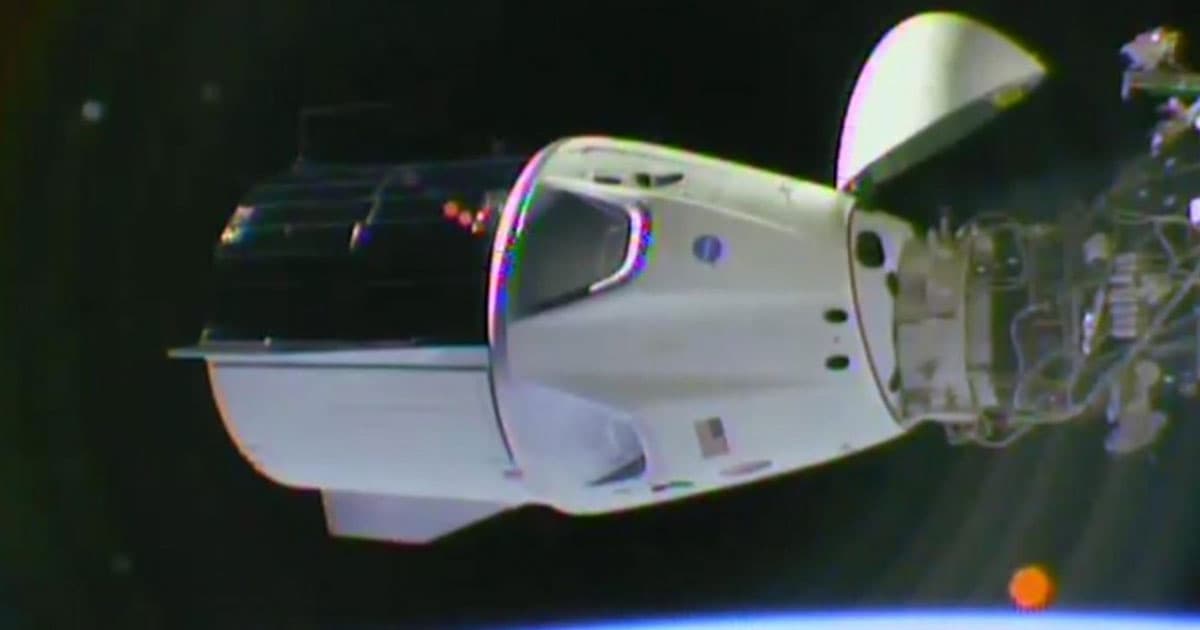 After successfully launching early on Saturday morning from NASA's Kennedy Space Center in Florida, SpaceX's next-generation passenger spacecraft Crew Dragon has docked itself to a free dock on the International Space Station at 5:51 am EST this morning.

The first @Commercial_Crew mission arrived at the space station today when the @SpaceX #CrewDragon completed soft capture on the Harmony module at 5:51am ET. #LaunchAmerica https://t.co/Bgcgac0O50 pic.twitter.com/KfNFpHxpGx

The footage, courtesy of the official International Space Station Twitter account, shows Crew Dragon slowly lining up its port with the ISS and approaching slowly.

Crew Dragon docked after visiting a number of other locations outside of the space station, using its thrusters, earlier this morning to test its docking system.

Hatch is open! Crew Dragon will now spend 5 days at the @space_station pic.twitter.com/HA9iSWOBVE

Anne McClain and David Saint-Jacques, two astronauts currently on board the ISS, started preparing to open the hatch that leads to the Crew Dragon from inside the station when it docked. Once they got inside, they were greeted by SpaceX's dummy "Ripley."

Astronauts on the @Space_Station have opened the hatch on @SpaceX’s Crew Dragon spacecraft! The station crew can now go inside the first American spacecraft to autonomously dock to the orbiting laboratory. 🇺🇸 pic.twitter.com/z2rP5MWCqu

It's yet another historic moment for the Crew Dragon mission as the docking procedure is quite different this time when compared to previous Dragon missions: “Dragon was basically hovering under the ISS,” said Hans Koenigsmann, vice president of mission assurance at SpaceX during a pre-launch briefing on Thursday. "You can see how it moves back and forth and then the [Canadarm] takes it to a berthing bay."

In contrast, the Crew Dragon’s docking system is active, he said: "it will plant itself in front of the station and use a docking port on its own, no docking arm required."

Five days from now, Crew Dragon will undock and makes its long way back to Earth. This time around, it will splash down in the Atlantic Ocean — previous (cargo) Dragon missions have touched down in the Pacific.

Read This Next
Shoo
Scientists Warn Giant Asteroid Is Actually Swarm of Particles, Nearly Impossible to Destroy
A Sip of Opal
NASA Discovers Precious Gemstones on Mars
Moon Wrestling
The Head of NASA Is Scared Chinese Astronauts Will Seize Portions of the Moon
Shot Well
Head of NASA Relieved to Hear Elon Musk Isn't REALLY Running SpaceX
Little Boxes
One Silly Little Detail Is Reportedly Delaying Artemis II by Years
More on Off World
Floodgates
Yesterday on the byte
Astronomers Complain That the JWST Is Producing Too Much Data, Too Fast
Til Death
Yesterday on the byte
Buzz Aldrin Marries His Employee at the Young Age of 93
Snowball Moon
Jan 22 on the byte
Something Weird Is Happening on Saturn's Snow-Covered Moon, Scientists Say
READ MORE STORIES ABOUT / Off World
Keep up.
Subscribe to our daily newsletter to keep in touch with the subjects shaping our future.
+Social+Newsletter
TopicsAbout UsContact Us
Copyright ©, Camden Media Inc All Rights Reserved. See our User Agreement, Privacy Policy and Data Use Policy. The material on this site may not be reproduced, distributed, transmitted, cached or otherwise used, except with prior written permission of Futurism. Articles may contain affiliate links which enable us to share in the revenue of any purchases made.
Fonts by Typekit and Monotype.