Even the side fins appear to be lined with a mosaic of small panels. 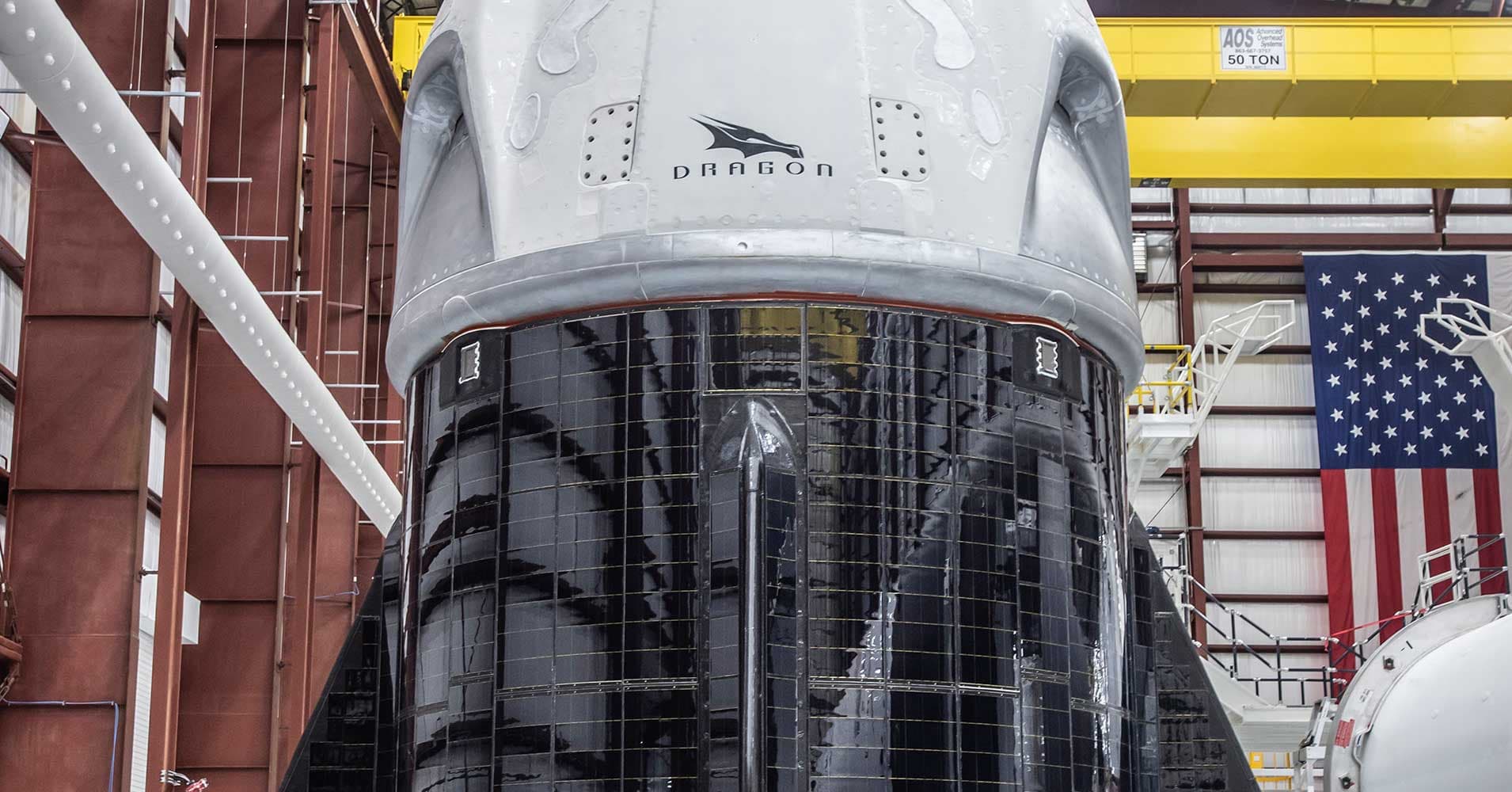 U.S. Vice President Mike Pence visited SpaceX's hangar in Cape Canaveral, Florida on Tuesday for an exclusive first look at the space company's first completed Dragon 2 class spacecraft. Luckily, the rest of us got a look as well thanks to new photos.

The visit showcased the Crew Dragon, Canadian Press reports, a passenger variant of the Dragon 2 that was first unveiled in May 2014. It's designed to ferry up to seven astronauts to space.

The newly released pictures also gave us a glimpse of what the Dragon 2 will look like once it's in orbit: solar arrays line the trunk of the capsule in flat, rounded sheets. Even the side fins appear to be lined with a mosaic of small panels.

To get it into space, SpaceX designed a new Block 5 core for its Falcon 9 rocket, which can be seen on the left in the picture below.

The Future of Space Travel

We got a detailed look at the interior of the Dragon 2 back in August when SpaceX invited the media to its headquarters in Hawthorne, California for an up-close look at a life-size model of the spacecraft.

The media got a glimpse of massive, tablet-like screens inside the Crew Dragon model, mounted in front of a row of race-car-like seats.

Navigating the Crew Dragon in orbit will be simple compared to piloting a Soyuz. In fact, the Crew Dragon will allegedly be completely autonomous, meaning that even docking to stations like the International Space Station won't need the help of the Canadarm2 — a giant robotic arm attached to the ISS — or manual control input from the astronauts, which was the case for previous iterations of the Dragon.

As of today, SpaceX is planning on launching the first Crew Dragon on January 17th. But if delays this week are any indication, that date is subject to change.

More on Crew Dragon: Here’s What We Know About SpaceX’s Crewed Dragon Spacecraft

Read This Next
Shot Well
Head of NASA Relieved to Hear Elon Musk Isn't REALLY Running SpaceX
Makeover Scene
Space Tourist Says He's Thinking About Flying SpaceX Craft Up to Fix Hubble
Grain of Salt
There's a Huge Problem With Elon Musk's Promise to Bring Starlink to Iran
Sluggo Mode
SpaceX Has a Major Problem With Its Starlink Internet Connections
Dumpster Fire
SpaceX Tested Starship's Engines and Accidentally Caused a Large Fire
More on Off World
Lonely Planet
4:20 PM on futurism
Scientists Find Nearby Planet the Same Size of Earth, Plan to Search It for Life
Take Cover
Yesterday on the byte
Space Startup Blows Up Another Giant Inflatable Space Station Module
Rock Blast
Yesterday on the byte
Scientists Say There's an Upside to Those Rocks That Keep Bludgeoning the James Webb
READ MORE STORIES ABOUT / Off World
Keep up.
Subscribe to our daily newsletter to keep in touch with the subjects shaping our future.
+Social+Newsletter
TopicsAbout UsContact Us
Copyright ©, Camden Media Inc All Rights Reserved. See our User Agreement, Privacy Policy and Data Use Policy. The material on this site may not be reproduced, distributed, transmitted, cached or otherwise used, except with prior written permission of Futurism. Articles may contain affiliate links which enable us to share in the revenue of any purchases made.
Fonts by Typekit and Monotype.