All systems are go for just one week from now. 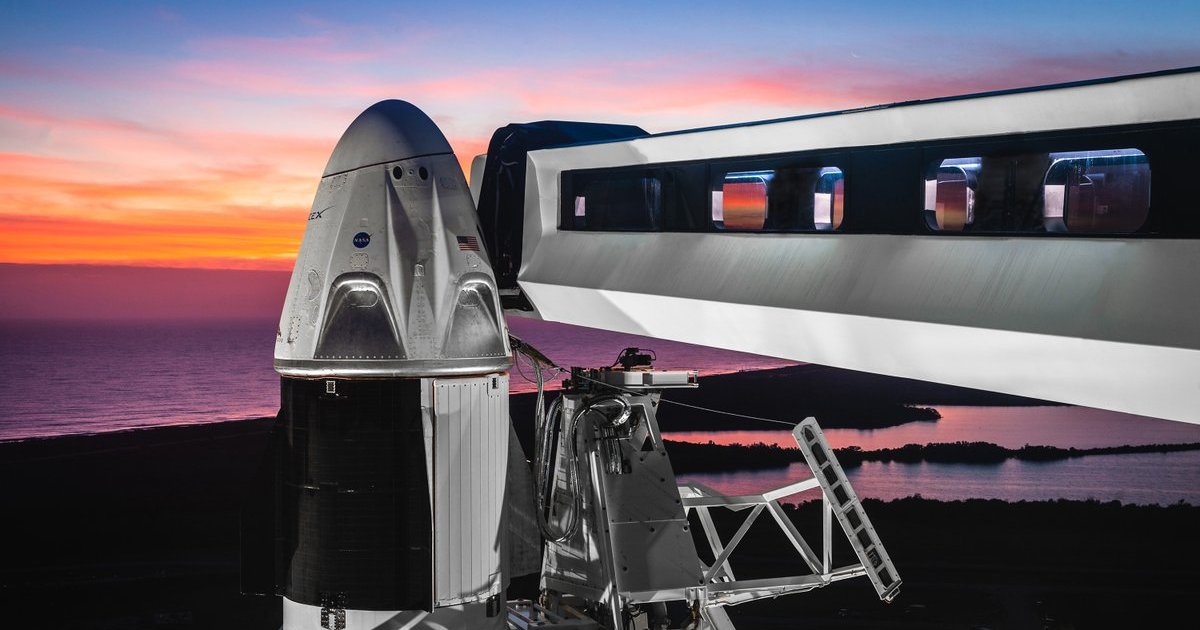 All  systems are go.

SpaceX's Crew Dragon passenger spacecraft is launching atop a SpaceX Falcon 9 rocket from Cape Canaveral in Florida on March 2 — but with only a spacesuit-wearing dummy on board.

It will then attempt to autonomously dock with the International Space Station after reaching orbit early Sunday morning.

NASA and SpaceX officially decided to proceed with plans yesterday for the first ever test flight, dubbed Demo-1 (or DM-1), of SpaceX's Crew Dragon passenger spacecraft.

SpaceX's Crew Dragon went vertical for the first time earlier this year at Cape Canaveral, readying itself for the test launch. Demo-1 was originally planned to take place on January 17.

If all goes according to plan, SpaceX could make history by sending astronauts to space from American soil for the first time since the Space Shuttle’s last trip back in 2011. Since then, NASA has been relying on the use of Russian Soyuz spacecraft to ferry astronauts to and from the International Space Station.

The Crew Dragon capsule can seat up to seven astronauts. One giant screen takes care of almost all control features of the futuristic spacecraft.

The dummy that will fly on board the Dragon during Demo-1 is outfitted with a number of sensors to collect vital data during launch.

"I fully expect we're going to learn something on this flight," Bill Gerstenmaier, associate administrator for NASA Human Exploration and Operations, said during a news conference yesterday.

"I guarantee that everything will not work exactly right, and that's cool — that's exactly what we want to do."

Read This Next
Overloaded
Whiny Space Tourists Say They Were Too Busy on the Space Station
The Moonian
Senior NASA Official Fears Getting "Stuck" on the Moon
Space Sick
Space Is Wreaking Havoc on Astronauts' Blood
Slip Sliding Away
NASA's Absurdly Expensive SLS Megarocket Is Broken Again
Water Elemental
NASA Astronaut Says He Almost Drowned During Spacewalk
More on Sci-Fi Visions
Getting Worse
7:01 PM on the byte
Bitcoin Just Had Its Worst Month in Crypto's Entire History
FROM THE DEPT. OF...
4:05 PM on futurism
Good Buys: Outer Brown Wicker Outdoor Armchair Conversation Set
FROM THE DEPT. OF...
12:32 PM on futurism
Oh, Say Can You See These Amazing 4th of July Sales
READ MORE STORIES ABOUT / Sci-Fi Visions
Keep up.
Subscribe to our daily newsletter to keep in touch with the subjects shaping our future.
+Social+Newsletter
TopicsAbout UsContact Us
Copyright ©, Camden Media Inc All Rights Reserved. See our User Agreement, Privacy Policy and Data Use Policy. The material on this site may not be reproduced, distributed, transmitted, cached or otherwise used, except with prior written permission of Futurism. Fonts by Typekit and Monotype.