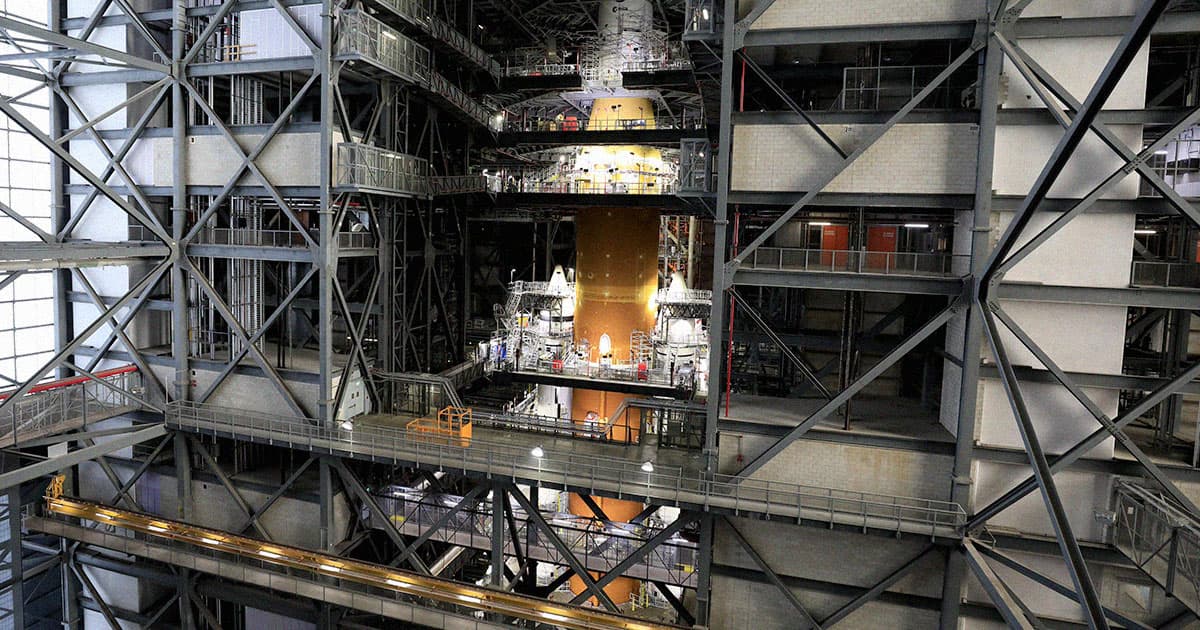 NASA is once again having to delay the launch of its uberpowerful, mega-expensive Space Launch System (SLS) at the heart of its forthcoming Artemis 1 mission to the Moon — this time because of a testing glitch.

The space agency conceded this week that the latest-scheduled test launch for its SLS rocket ahead of the unmanned Artemis 1 launch has once again been pushed back from February 2022 until March or April because one of the rocket's engine flight controllers — which rocket scientists call the "brain" of these high-powered engines — had boot-up issues.

The SLS' Aerojet Rocketdyne RS-25 engines aren't themselves new, Gizmodo noted: three of the Boeing-made engines were featured in NASA's Space Shuttle program, but to its credit, the SLS has four, and they've been modified to the specifications of this seemingly-cursed rocket.

It's bizarre for any of these engines to have functionality problems given that they all tested just fine during preliminary and integrated testing, Gizmodo pointed out — but given that the SLS was supposed to launch five years ago, dysfunction is par for the course at this point.

After discovering this latest SLS issue and attempting to troubleshoot, rocket engineers ultimately decided to replace the problematic controller with a new one, bringing the rocket back to "full capacity," per NASA.

If this were the first time this rocket had had problems it would be on thing, but the SLS program has been plagued by delays throughout its 11-year history.

The SLS' inception — that is, its funding approval in Congress — took place in 2010, back when former President Barack Obama's hair was only barely greying. Initially meant to launch in 2016, the rocket's debut has been delayed time and again due to sundry "technical difficulties," as one former NASA administrator put it in 2017.

In spite of all the issues, Northrop Grumman — the military contractor awarded with the SLS's booster contract — is set to get another $3.19 billion contract from NASA for "SLS booster production." Those $3 billion in taxpayer dollars are on top of the $2 billion it reportedly took to build the SLS to begin with.

Don't get us wrong: it would be really, really awesome if the SLS could finally launch this upcoming spring. But there have been so many delays — or, in NASA parlance, "slips" — that it seems like if Artemis 1 is to get to the Moon and back anytime within the next few years, NASA may well try to do so with another rocket.

More on the cursed rocket: The SLS Is Probably the Last Rocket NASA Will Ever Build

Read This Next
Putting Things In Perspective
Amazing Artemis Photo Shows Every Human, Alive or Dead, Plus the Moon
Fighting Words
Retired NASA Astronaut Scott Kelly Dishes on Ukraine, Russia, and Moon Mission
Psychological Warfare
Experts Excoriate NASA Report Claiming James Webb Wasn't Homophobic
Big Impact
Meteorite Hit Mars So Hard NASA Thought It Was a Quake
Failure to Launch
Lawsuit Accuses NASA of Widespread Racial Discrimination
More on Off World
Wrong Rocket
Yesterday on the byte
Space Tourism Company's Website Accidentally Shows Photo of Rocket Exploding
SpaceX Spies
Yesterday on the byte
SpaceX Unveils Military Satellite Called Starshield
I Don't Like This...
Tuesday on the byte
Fun Website Lets You Simulate an Asteroid Impact in Your Hometown
READ MORE STORIES ABOUT / Off World
Keep up.
Subscribe to our daily newsletter to keep in touch with the subjects shaping our future.
+Social+Newsletter
TopicsAbout UsContact Us
Copyright ©, Camden Media Inc All Rights Reserved. See our User Agreement, Privacy Policy and Data Use Policy. The material on this site may not be reproduced, distributed, transmitted, cached or otherwise used, except with prior written permission of Futurism. Articles may contain affiliate links which enable us to share in the revenue of any purchases made.
Fonts by Typekit and Monotype.