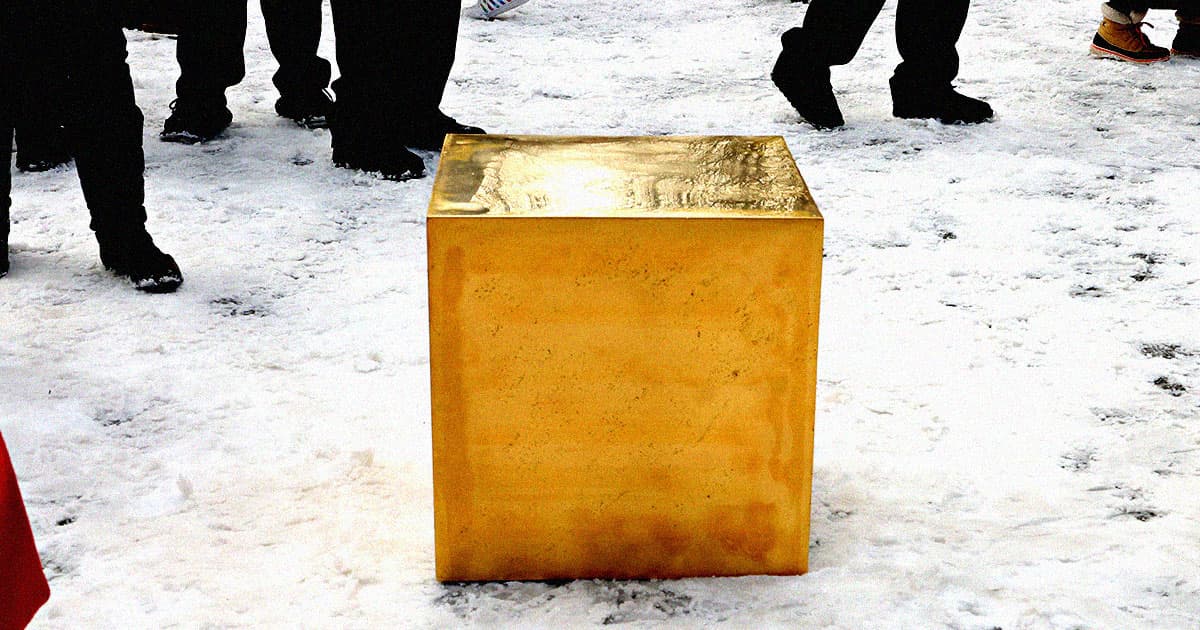 The Central Park Gold Cube Is an NFT Publicity Stunt, You Idiots

Move over, mysterious monoliths — there's a new bizarre structure capturing hearts and minds online, and the concept behind this one is a doozy.

The stump-sized gold cube that graced Central Park's frozen lake for approximately 12 hours, worth a reported $11.7 million and replete with its own security detail, turned heads online and off this week. So, naturally, there had to be an annoying publicity stunt behind it.

The since-removed cube was created by German artist Niclas Castello, who told Artnet that the not-for-sale cube is "a conceptual work of art in all its facets" that is meant to represent "something that is beyond our world" that he characterized as "intangible."

And by intangible, of course, he means that the cube ties into the whole non-fungible tokens (NFTs) craze, which he'll be launching on his website in a few weeks. The artist has already created his "Castello Coin" (trading name $CAST) that is currently being sold for about 44 cents each, and there's an NFT launch scheduled in a few weeks' time, according to a countdown timer on his site.

Second most maddening thing is that it’s connected to some NFT bullshit, of course

Third most maddening thing is that it looks big in one picture but really it’s just a dinky ass box pic.twitter.com/FOcpG02LeE

Because it is 2022 and nothing matters anymore, there is, naturally, a haughty artspeak explanation behind the cube-to-NFT connection.

"The cube can be seen as a sort of communiqué between an emerging 21st-century cultural ecosystem based on crypto and the ancient world where gold reigned supreme," Lisa Kandlhofer, an Austrian gallery owner, told Artnet.

The report noted that after its removal at sundown from the park, the "Castello CUBE" was to be taken to a Wall Street dinner that was purportedly hosting "numerous celebrities" whose names were not printed.

And at the end of the day, we're sure, the idea is to make a buttload of money for the artist and everybody else involved. Exit through the gift shop!

Artnet's report added that Castello's other works have been inspired by Andy Warhol and Jean-Michel Basquiat, and compared the cube to artist Damien Hirst's infamous "Memento Mori," a diamond-encrusted skull that the artist claimed he sold in 2007 for $100 million but apparently actually kept locked in a storage facility for 15 years instead.

The report also compared the cube, aptly perhaps, to Piero Manzoni's 1961 "Artist's Shit," which is exactly what it sounds like — a series of 100 tin cans containing the artist's excrement, meant as a statement about the art world and capitalism — that each sold for the price of gold at the time, which was about $37 per tin. One of the "sculptures" was sold again in 2016 for about $275,000.

There's no doubt that the gold cube both looks and smells better than a can of poo from 1961, but at least the Manzoni cans had an anti-capitalist statement that went beyond the art world's latest get rich quick scheme.

The best detail? It turns out the "solid gold" cube is actually hollow — in what some observers said was a perfect metaphor for the NFT phenomenon itself.

READ MORE: An Artist Placed a Cube Made From $11.7 Million Worth of Gold in Central Park—Protected By Its Own Security Detail [Artnet]