Russia Plans to Cut Itself Off From the Global Internet

But just as a test. 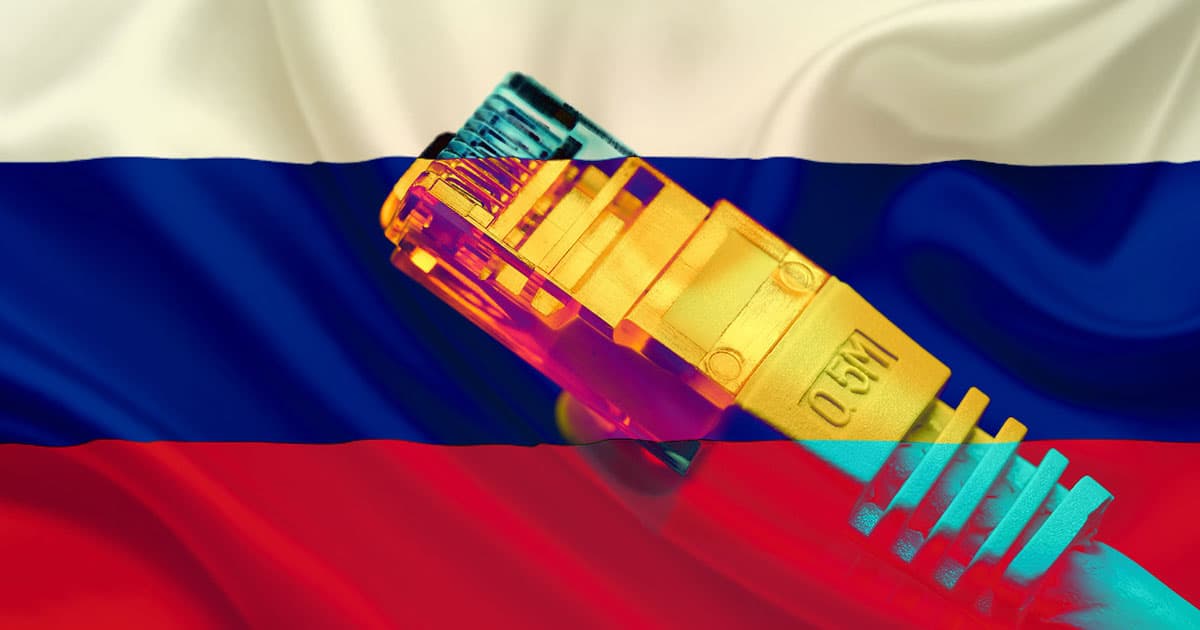 Sometime before April, the Russian government plans to briefly disconnect the entire country from the internet.

The brief shutdown is part of an ongoing effort to bolster Russia’s cybersecurity against foreign attacks that would cut it off from the rest of the world, according to ZDNet — and it's a sobering reminder that in a fractious era for international relations, a global internet isn't a guarantee.

Turn It On Again

The push for the big experimental shutdown comes from proposed updates to Russian telecom laws. The Russian government announced in 2017 that it would handle up to 95 percent of all internet traffic locally — that is, independent from the rest of the world — by 2020.

The upcoming shutdown will test just how resilient those local networks are and how much internet traffic can slip through the cracks. A new law will also direct Russian internet providers to direct all traffic through government-approved servers to further enforce content bans, according to ZDNet.

The law has the full backing of President Putin and may be partially inspired by the Great Firewall of China, the colloquial name for the country’s censored internet.

READ MORE: Russia to disconnect from the internet as part of a planned test [ZDNet]

More on internet censorship: The World of the Future Will Have Two Separate Internets, Former Google CEO Predicts

Read This Next
Break Out in Hives
Twitter Competitor Shuts Down App When It Turns Out Hackers Can Read Users' Private Messages
Read the Room
Elon Musk Fans Horrified as He Suggests Ukraine Give in to Putin's Demands
Finger Pointing
Russia Warns That Nuclear Plant It Captured May Leak Waste Over Europe
Sobering News
Ukrainian Hackers Allegedly Cut Off Russian Soldiers' Beloved Vodka Supply
Hell on Earth
Internet Aghast at AI Facial Recognition Used to Identify Dead Russian Soldiers
More on Future Society
Unorthodox Urinal
Dec 2 on the byte
Scientists Say They've Figured Out the Ideal Urinal for Not Splashing Back
Abso-Effing-Lutely
Dec 2 on futurism
Free Speech Absolutist Elon Musk Discovers That Some Speech Is Unacceptable After All
Might See Nonsense
Dec 2 on futurism
MSN Fired Its Human Journalists and Replaced Them With AI That Started Publishing Fake News About Mermaids and Bigfoot
READ MORE STORIES ABOUT / Future Society
Keep up.
Subscribe to our daily newsletter to keep in touch with the subjects shaping our future.
+Social+Newsletter
TopicsAbout UsContact Us
Copyright ©, Camden Media Inc All Rights Reserved. See our User Agreement, Privacy Policy and Data Use Policy. The material on this site may not be reproduced, distributed, transmitted, cached or otherwise used, except with prior written permission of Futurism. Articles may contain affiliate links which enable us to share in the revenue of any purchases made.
Fonts by Typekit and Monotype.