Knockoff eBay NFTs Are Kind of Based, Actually

Would you buy knockoff Ray-Bans? Then you might love these knockoff NFTs. 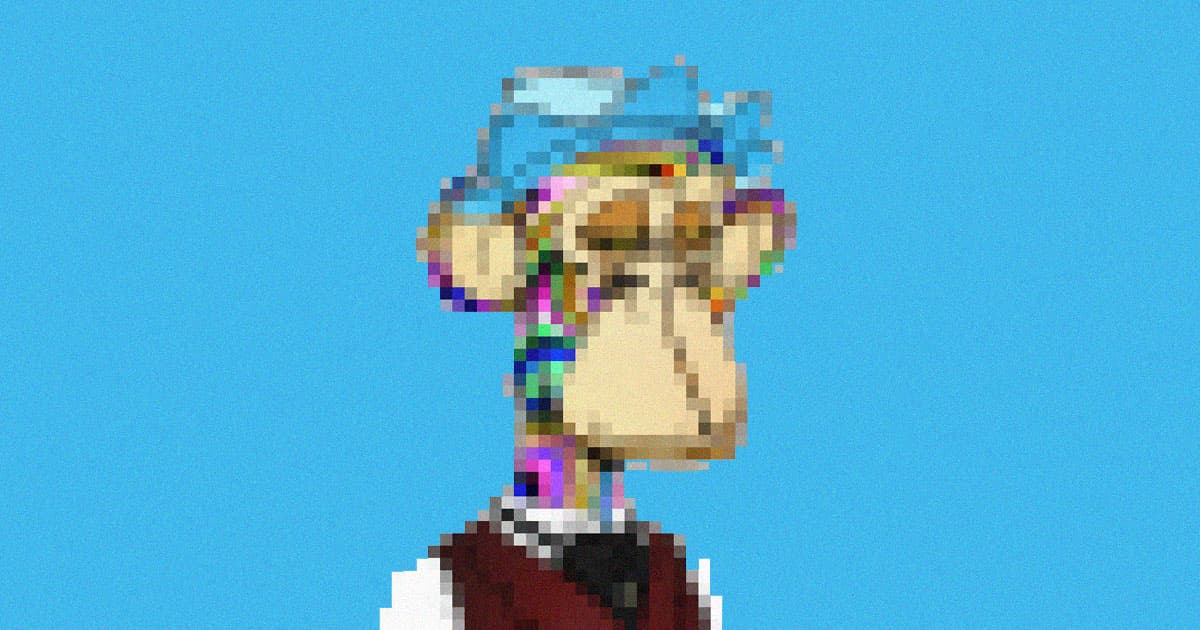 Auction website eBay is quietly becoming a major NFT marketplace. And, unsurprisingly, a lot of the NFTs being sold on the platform are complete scams, blockchain blog CryptoSlate reports — well, kind of.

NFTs on eBay's marketplace range from a basic pop art portrait of Elon Musk, one of which sold for $7,500, to "Bored Ape Yacht Club" (BAYC) knockoffs being sold at a huge markup.

There's one big catch, though: many of eBay's "Bored Apes" are actually "Sweet Apes," an entirely different collection of NFTs, as CryptoSlate points out, that shamelessly knock off the real thing hook, line, and sinker.

Sweet Apes are also being sold through OpenSea, where they're described as "sharpened 4K versions" of the real thing that have "no affiliation with the original institutions and people."

In other words, they're the NFT equivalent of a knockoff Gucci handbag and aren't part of the official BAYC collection on OpenSea — some of which are now valued upwards of a million dollars thanks to enormous amounts of hype and celebrity endorsements.

But if you're in it for Bored Ape-style art, regardless of its actual legitimacy, some of them being offered on eBay are a steal — almost literally, in this case.

In other words, CryptoSlate appears to have stumbled upon some of the most salient questions in the burgeoning NFT market with its investigation.

Do our real-world definitions of counterfeiting or knocking off actually apply to art generated by algorithms? Is a digital file marked up from $2 to $47 really "marked up" when the original is incredibly overvalued in the first place?

Besides, does any of this actually count as art in either a traditional or postmodern sense?

In eBay's defense, the "Apes" being sold on its platform aren't too different from the myriad of other fake products its users buy and sell. And as long as they know the product isn't real, it's a pretty interesting exploration of issues around authenticity, counterfeiting, and digital media.

While we don't have the answers to these questions for now, we get to point and laugh at those who are mad that their uber-expensive jpgs now have cheapo ripoffs.

More on NFT scams: NFT Buyers Furious After Art They Spent $70 Million Turned Out To Be Completely Hideous

Read This Next
Apes Ahoy
A Major NFT Project Is Falling Apart in a Storm of Lawsuits
Rube Goldbergian
The Dune NFT Project Is Back With an Inscrutable New Scheme
Sad!
Melania Trump Accused of Secretly Buying Her Own NFT to Avoid Disgrace
Magic: The Reckoning
Maker of "Magic" Cards Sends Cease and Desist to Project Minting Unauthorized NFTs
Breaking The Law
Prominent NFT Marketplace Shuts Down Almost All Sales for Fraud
More on Future Society
Down in Flames
Wednesday on the byte
Elon Musk Apparently Thinks Twitter Is a "Flaming Dumpster Rolling Down the Street"
All Tomorrow's Pa...
Wednesday on the byte
Party Startup Says It Has Zero Plans to Make Any Money With Investors' Funds
Primate Theft
Tuesday on the byte
It Was a Very Bad Weekend for Monkeys Being Stolen From Zoos, Apparently
READ MORE STORIES ABOUT / Future Society
Keep up.
Subscribe to our daily newsletter to keep in touch with the subjects shaping our future.
+Social+Newsletter
TopicsAbout UsContact Us
Copyright ©, Camden Media Inc All Rights Reserved. See our User Agreement, Privacy Policy and Data Use Policy. The material on this site may not be reproduced, distributed, transmitted, cached or otherwise used, except with prior written permission of Futurism. Articles may contain affiliate links which enable us to share in the revenue of any purchases made.
Fonts by Typekit and Monotype.