The Dune NFT Project Is Back With an Inscrutable New Scheme 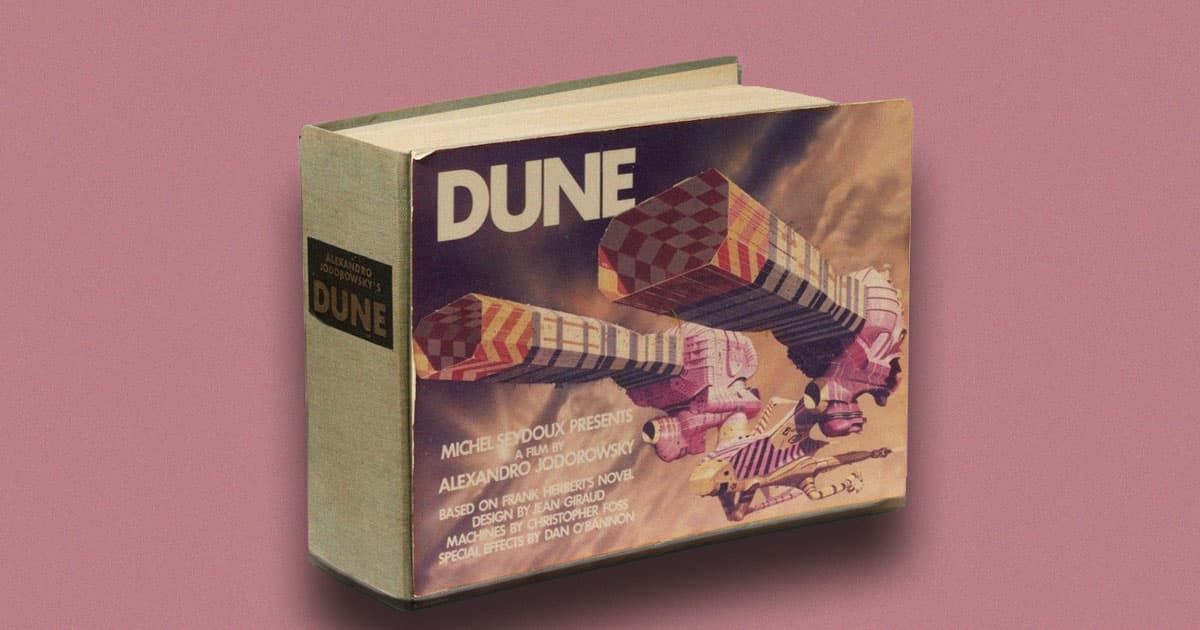 Just when you thought crypto nerds had outdone themselves, they surprise us once again — like devising an astonishingly complex viewing booth to show off an uber-rare copy of an Alexander Jodorowsky book about a never-made "Dune" movie.

Known as SpiceDAO, the now-infamous group first made headlines in late 2021 when its founder, 25-year-old crypto millionaire Soban "Soby" Saqib, won a Christie's auction for the richly-illustrated volume of the never-realized "Dune" adaptation to the tune of $2.9 million, which was more than 100 times the $40,000 the British auction house expected.

This "director's bible" has achieved cult status among film enthusiasts due to the fact that in spite of Jodorowsky's sweeping vision — which included 14 hours of screen time, a Pink Floyd score, and Salvador Dalí playing the Padishah Emperor — the film never got made.

When Saqib won it in auction, he too had a grand vision: to "liberate" the volume, of which between 10 and 20 copies still exist, so that his fellow crypto-loving "Dune" nerds could finally feast their eyes on the mysterious contents of a concept art book detailing what many consider the greatest film never made.

So devoted to this bold idea was the SpiceDAO community that they more than quadrupled Saqib's original investment, raising $12 million more for the project.

The problem was that the groups muddled plans kept expanding until they included ideas as contentious as burning the book itself as a marketing stunt and selling NFTs of each individual page, raising the hackles of the book lover crowd.

What happened next fades into an inscrutable miasma of hubris, miscommunication, and the tensions inherent to a bunch of internet strangers trying to run an increasingly complex organization.

According to one account, some SpiceDAO members were under the impression that because they'd purchased a copy of Jodorowsky's "Dune," that they had sufficient claim over the never-made film's intellectual property rights to make an animated version of it and sell non-fungible tokens (NFTs) related to its contents as well. But the project pushed back against that narrative, telling The Verge that in reality they just wanted to make an animated film that had "Dune vibes." And the plan to burn the book had been scrapped, they said.

That brings us to today, when the project dropped a Medium post "roadmap" with cryptic cameos by everyone from an unnamed "Netflix screenwriter" to "300" author Frank Miller. The clearest takeaway, as far as we can interpret the missive, is that they're going to take their precious tome on the road this summer, to show it off at a series of comic book conventions.

Here's where things get really peculiar. According to a proposal posted on SpiceDAO's forum, the project could bring an "immersive experience" to the summer's comics conventions, which will have viewers enter an oculus-shaped room with the "Dune bible" on an altar. There, a gloved art handler wearing a camera-enabled headset will peer down upon the volume and slowly turns its pages, which in turn will be projected onto a screen. On, and did we mention there are noirish renders of the whole thing?

The scheme, which admittedly does sound vaguely "Dune"-esque — come on, an altar inside some high concept architecture? — earned robust mockery on Twitter, where commentators saw it as an excessively galaxy-brained way to once again outsmart intellectual property law.

Maybe that's a fair critique, or maybe not. After all, the most far fetched part of the scheme was only shared by one of the group's members. If anything, it probably illustrates the most challenging aspects of the whole DAO model: that the strangest outburst by an individual member can simultaneously seem to represent the entire project or just some peripheral figure talking out loud.

In any case, the whole thing might be irrelevant. As another Twitter critic noted, the "Dune bible" had been available to view for free on a Google photo album before SpiceDAO blew up its spot. That particular album has since been taken down, but you can still track it down, according to Robertson's reporting.

All told, it's just one more puzzling development in a particularly cryptobrained project — but also one that seems to perfectly illustrate many of the deepest tensions in the entire DAO model.

Read This Next
La La La
SBF's Dad Kept Sticking His Fingers in Ears During Court Hearing
Sword Art Online
Guy Who Invented the Word "Metaverse" Building His Own Metaverse
Apes Ahoy
A Major NFT Project Is Falling Apart in a Storm of Lawsuits
Wrong-Clicker
Knockoff eBay NFTs Are Kind of Based, Actually
Crypto Fail
The CEO of Coinbase Gets Brutally Owned, May Never Recover
More on Future Society
Musk Rats
Yesterday on the byte
Twitter Is Quietly Re-Suspending the Lunatics Elon Musk Let Back On
Going Wireless
Wednesday on futurism
Hackers Took Over a Subdomain of Wired.com for Several Months and Replaced It With Sleazy Online Casino Content
Spreadsheet Guy
Tuesday on the byte
Sam Bankman-Fried Posts Excel Docs That He Says Shows Nothing Was His Fault
READ MORE STORIES ABOUT / Future Society
Keep up.
Subscribe to our daily newsletter to keep in touch with the subjects shaping our future.
+Social+Newsletter
TopicsAbout UsContact Us
Copyright ©, Camden Media Inc All Rights Reserved. See our User Agreement, Privacy Policy and Data Use Policy. The material on this site may not be reproduced, distributed, transmitted, cached or otherwise used, except with prior written permission of Futurism. Articles may contain affiliate links which enable us to share in the revenue of any purchases made.
Fonts by Typekit and Monotype.