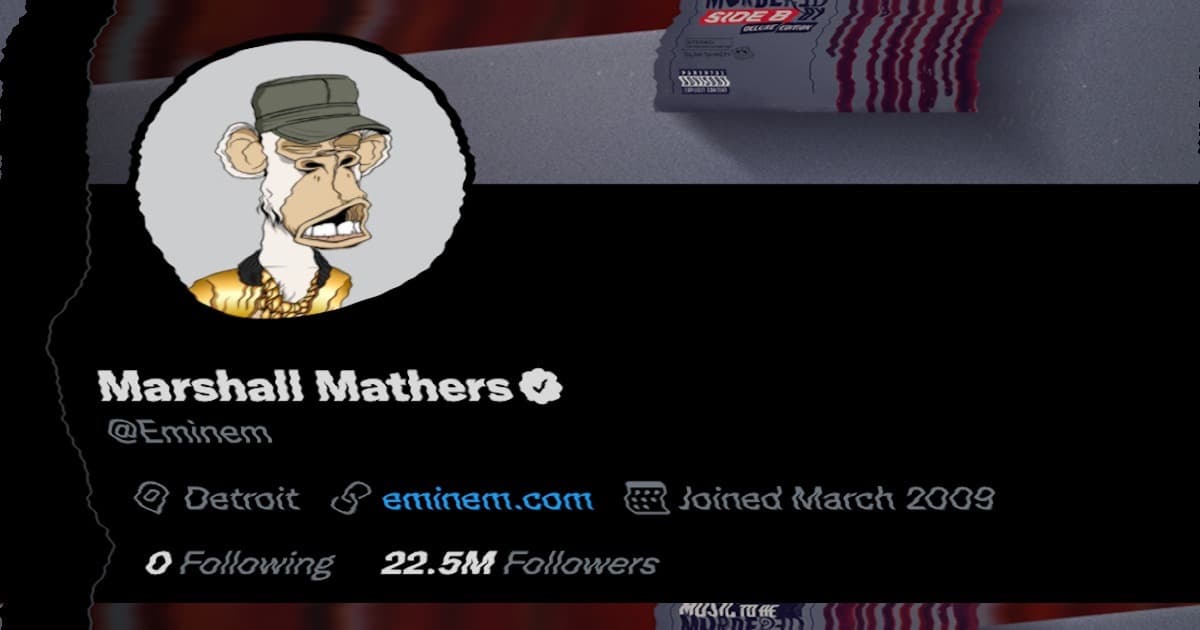 The real Slim Shady, aka legendary rapper Eminem, purchased a not-so-real Bored Ape NFT for nearly half a million dollars toward the end of December. The rapper, whose legal name is Marshall Mathers, hasn't released a statement about the purchase yet, but did make the uncanny look-alike his profile pic on Twitter.

Blockchain publication Decrypt reported that Eminem paid for one of the Ethereum-based Apes for 123.45 ETH, or an eye-watering $452,000. The NFT, dubbed "EminApe," is wearing a hat similar to those Mathers is often photographed in, and sports what appears to be a gold chain. The art was created by user Grandpa Ape Yaht Club.

"I’m living in a simulation," said the crypto enthusiast who sold the NFT to Mathers. "Thank you @Eminem for buying my ape and joining the club!"

Digital agency Six took credit for setting up the sale to Eminem, according to Decrypt.

And yeah, the NFT does bear a striking resemblance to the rapper, as does the literal sketch art of himself Eminem purchased with his NFT account Shady Holdings, which was created last month.

Unfortunately, NFTs aren't the only thing Mathers is into collecting. He's also racked up a ton of court trials and charges over the years, including for pointing a gun and yelling "I'm going to kill you!" at a man kissing his now-ex-wife back in 2000. In 2006, no charges were brought after Mathers showed up at his ex's house and poked his then-13-year-old niece in the head with a finger while threatening to kill her. And that's without getting into his decades of homophobic and misogynistic lyrics.

It's hard to be jazzed about such a scary guy spending beaucoup dollars on a random picture, but we also have questions about his motivations. Why is Eminem snapping up NFTs? Why are at least two of them his own lookalike? And does he plan to mint Mom's Spaghetti NFTs of his own?

More on NFT shenanigans: Someone is Selling NFTs of Olive Garden Locations They Do Not Own

Gassy Girl Boss
Reality TV Star Stops Selling Her Farts in Jars to Sell Fart NFTs Instead
1. 5. 22
Read More
Awful Taste
Someone's Selling Shockingly Racist NFTs of George Floyd
12. 17. 21
Read More
You Wouldn't Download a Car
Person Furious That Someone Right Click Saved Their Precious NFT
11. 5. 21
Read More
+Social+Newsletter
TopicsAbout UsContact Us
Copyright ©, Camden Media Inc All Rights Reserved. See our User Agreement, Privacy Policy and Data Use Policy. The material on this site may not be reproduced, distributed, transmitted, cached or otherwise used, except with prior written permission of Futurism. Articles may contain affiliate links which enable us to share in the revenue of any purchases made.
Fonts by Typekit and Monotype.