Can't handle two weeks in your house? Try a year in space. 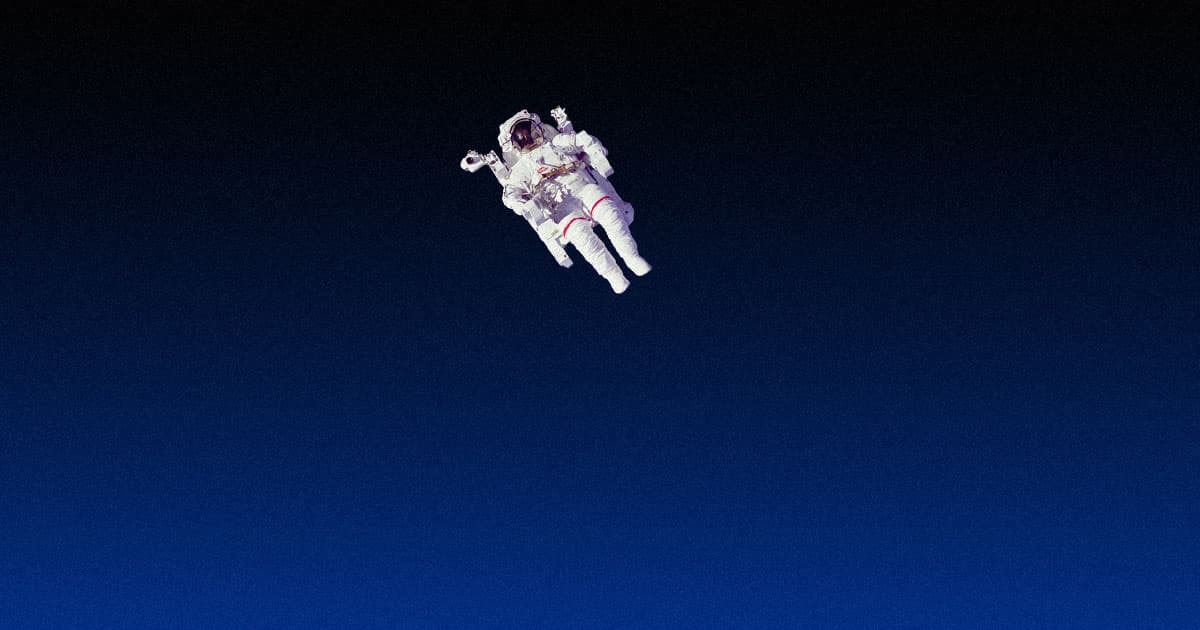 Self quarantine can get pretty lonely — especially if you're used to spending a lot of time around other people on a daily basis.

But there's one group who are real pros when it comes to isolation: astronauts orbiting the Earth with nothing but empty space around them, Space.com reports — in some instances, for an entire year at a time.

So now, it's time to listen to the experts. If they can survive months if not years aboard the International Space Station (ISS), you can survive a couple of weeks locked up in your apartment.

"It's actually very doable, but it's very important to be able to interact well with the people you're staying with, living with," retired astronaut Peggy Whitson said about being isolated in space, during a Monday interview with CBS This Morning.

Whitson broke the record in 2017 for spending the most cumulative days in 2017 with a total of 665 days aboard the International Space Station.

"A lot of people are trying to work from home and trying to be parents from home and have a family at home and so it becomes very challenging," Whitson added. "But that's just like what we did on board the International Space Station."

Whitson also talked about what NASA astronauts go through to get ready for this isolation.

"We actually train our astronauts to improve those skills because we want everyone to play well with others on board the space station," Whitson told CBS. "You don't get to pick your crew, you're just going to be up there and you have to make the best of whatever situation."

So what do you do when you can't get just step out of the door?

"I would do the extra work that I'd been thinking about doing," Wilson said.  "What are the things that you would do if you had more time? Is it to read? Is it to maybe write poetry or do art? What is it that has been the thing that has been in the back of your head?"

In a recent Twitter thread, current NASA astronaut Anne McClain shared the kind of skills every NASA astronaut has to learn called "Expeditionary Behavior," or EB for short.

"Good EB" is all about "talking so you are clearly understood" and actively listening, according to McClain.

You also have to learn how to become a leader by enhancing "the group’s ability to execute its purpose through positive influence."

Astronauts also have to learn how to take good care of themselves, "including hygiene, managing time and personal stuff, getting sleep, and maintaining mood."

In an opinion piece for The New York Times, veteran NASA astronaut Scott Kelly also gave some sage advice for those going stir crazy at home during the coronavirus outbreak.

Step 1: follow a routine. "You will find maintaining a plan will help you and your family adjust to a different work and home life environment," Kelly wrote.

Step 2: slow down. "Living in space, I deliberately paced myself because I knew I was in it for the long haul — just like we all are today," Kelly added. "Take time for fun activities: I met up with crew mates for movie nights, complete with snacks, and binge-watched all of “Game of Thrones” — twice."

Reading, playing instruments, keeping a journal, and — of course — washing your hands are all great ways to keep sane and healthy while cooped up at home, according to Kelly.

Retired Canadian astronaut Chris Hadfield also had some advice to give in a video uploaded to his YouTube channel over the weekend.

His advice is to approach the situation from an analytical place. First, figure out the actual risks that you and your loved ones are facing right now. Then find an objective and set yourself goals.

"Once you understand the risk and your mission, your sense of purpose, and your obligations, then take action. Start doing things," Chris Hadfield said.

"There's never been a better time to self-isolate," Hadfield argued. "So many people have access to the internet that you have the entire written work, body of knowledge, right at your fingertips."

When asked what he was doing to keep safe during the outbreak — he turned 90 in January — Aldrin replied: "Lying on my ass and locking the door."

More on astronauts: The Second Man to Walk on the Moon Has Some Quarantine Advice

Read This Next
From the Dept. of Things to Buy
Review: The "Out of This World Cook Book" Chronicles the Early Meals of the Space Age
Overloaded
Whiny Space Tourists Say They Were Too Busy on the Space Station
The Moonian
Senior NASA Official Fears Getting "Stuck" on the Moon
Crooked Cops
NYPD Cop Investigated for $1.5 Million Scheme to Sell Fake Vaccine Cards
Space Sick
Space Is Wreaking Havoc on Astronauts' Blood
More on Sci-Fi Visions
Human v. Giraffe
Tuesday on the byte
Chaotic Italian Fashion Line Baffles Facial Recognition Software
Step One
Tuesday on the byte
World’s Third Richest Person Says He’s Developed "Addiction" to ChatGPT
FROM THE DEPT. OF...
Tuesday on futurism
The Best Places to Buy A Laptop in 2023
READ MORE STORIES ABOUT / Sci-Fi Visions
Keep up.
Subscribe to our daily newsletter to keep in touch with the subjects shaping our future.
+Social+Newsletter
TopicsAbout UsContact Us
Copyright ©, Camden Media Inc All Rights Reserved. See our User Agreement, Privacy Policy and Data Use Policy. The material on this site may not be reproduced, distributed, transmitted, cached or otherwise used, except with prior written permission of Futurism. Articles may contain affiliate links which enable us to share in the revenue of any purchases made.
Fonts by Typekit and Monotype.