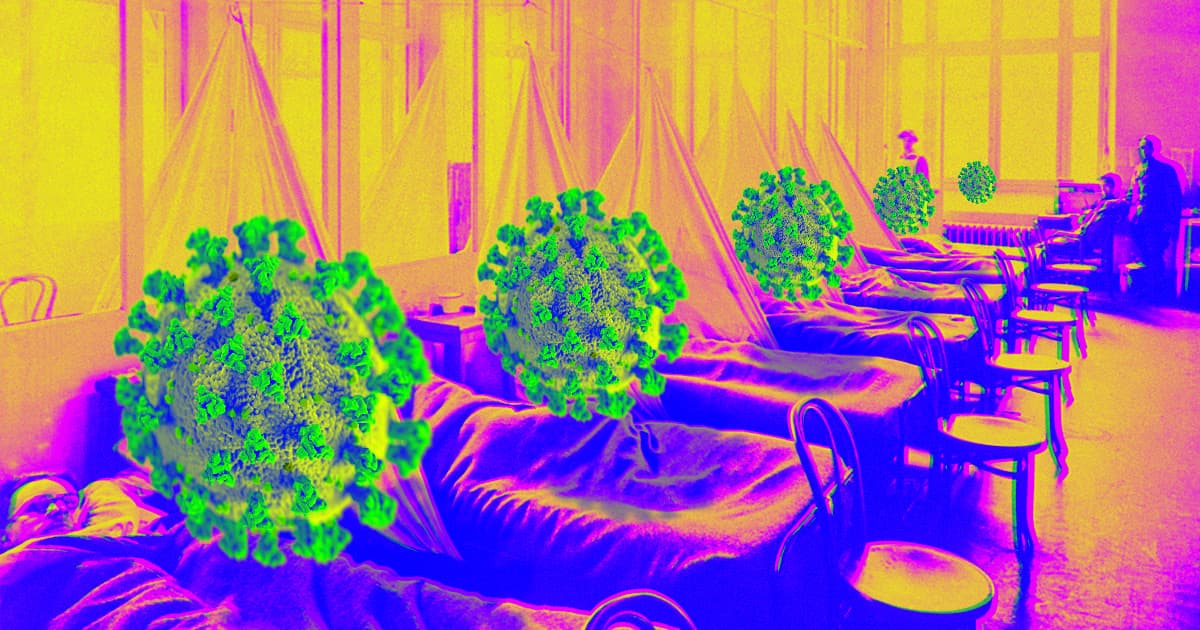 We're about three months into the coronavirus outbreak, whereas the real devastation of the 1918 flu began about six to seven months in, after the virus started to cause deadly, rapidly-developing bacterial infections and pneumonia deep in patients' lungs.

"I think what that means," Mooney said, "is public health as an endeavor, as a professional career, hasn't quite gotten it right yet when it comes to convincing those in power to make the right decisions."

When the Spanish flu hit, scientists barely knew what viruses were. The first microscope capable of even seeing them wasn't built until the 1930s, and doctors hadn't yet developed vaccines or any sort of antiviral or antibacterial medications.

In other words, doctors had no effective treatment against the 1918 flu. Physicians threw everything they had at it: bloodletting, oxygen, and rudimentary vaccines that didn't work, all to no avail.

But despite the similarities, COVID-19 is following a very different trajectory than the Spanish flu; there's no global war raging, but there are fast and easier ways for a higher volume of people to travel quickly across the globe, spreading the virus far from where it began.

"There are some obvious differences, but... really the parallels are in non-pharmaceuticals interventions that can take place, like mandatory quarantine of the diseases so public health officials know where they are and who's got them," Mooney said.

Some of Mooney's research has focused on managing the balance between individual liberty and the needs of society during a public health emergency. For instance, he said that more governments are likely to pursue "oversteps and measures such as controlling or at least managing or trying to prevent public gatherings as well. You see some of that happening now in some countries where they're beginning to think about suspending public gathering."

"But mostly the interventions are individual quarantines, closure of schools," he added.

For instance, China blocked transportation in and out of the first cities to be hit by the coronavirus, effectively quarantining the disease's epicenter from the rest of the world. The U.S. quarantined nearly 200 citizens who tried to flee China, urging thousands of others to isolate themselves on top of that.

But the most disturbing parallel between today's outbreak and those of yesteryear is how governments have controlled the flow of information.

On top of that, U.S.'s Sedition Act of 1918 made it illegal to "willfully utter, print, write, or publish any disloyal, profane, scurrilous, or abusive language about the form of the Government of the United States."

This time around, China responded to early reports of an emerging coronavirus outbreak by punishing whistleblowers and censoring social media. As a result, efforts to contain the outbreak failed, in part because people didn't get the information or warnings they needed. For instance, when a Wuhan-based doctor was one of the first to warn of an outbreak — which he mistook at the time for a resurgence of SARS — he was arrested and silenced by the government over "spreading rumors." He later contracted the virus and died from it.

Now, having learned seemingly nothing from China's errors, U.S. President Donald Trump has repeatedly downplayed, and spread false information about, the outbreak. He's called it a political conspiracy to make him look bad, and on Wednesday dismissed World Health Organization reports and common-sense practices like staying home from work when sick.

Mooney points out that the way authorities have controlled the narrative around the outbreak reveals that their priorities are backwards. Instead of putting the concern for human life and citizens' welfare first, leaders like Trump and Chinese President Xi Jinping have focused more on national pride.

"The argument here should be that human life has a value above a government's concern for outside attitudes about its ability to control an epidemic," said Mooney. "You want reliable information, you want evidence-based information, and you want information that comes from sources you can trust."

People need transparency, he continued, so that they can make informed decisions about travel, sending kids to school, and going about daily life. Without that guidance, there's no way to organize an effective response on the individual or community level.

"It's interesting how these kinds of things repeat themselves, in the sense that every time something like this happens, the focus is the quick fix: getting a vaccine out, setting up emergency measures," Mooney said. "These are only ever going to be temporary until the next thing comes along."

A vaccine won't be ready for at least a year, by some estimates — and when another epidemic rolls around we'll be back at square one. Meanwhile, healthcare remains prohibitively expensive to many in the U.S. and public health measures are a low political priority for the Trump administration.

"It's a question of how important is public health compared to investing in the economy, investing in education — it's a question of priorities," said Mooney. "It's easy to put it in a drawer and forget about it until the next pandemic comes along, whereas you could argue that public health is something that needs to be constantly invested in, the eye never be taken off the ball."

And about those historical laws that let officials show up and take people into quarantine? Mooney says that by and large, the rich went unaffected. Wealthy people with large homes were more or less left to their own devices — their kids weren't taken to isolation hospitals because it was assumed they had the space and resources to putz around at home in self-imposed isolation instead.

For those today who are exposed, the U.S. government won't even guarantee that a vaccine for COVID-19 will be affordable, let alone free — suggesting many people in the most at-risk populations won't be able to access it.

Additionally, Mooney said data shows that people respond according to personal fear: When a vaccine was available for smallpox, people didn't decide to use it until they were personally endangered, potentially putting their entire community at risk.

"What we really need is affordable healthcare and investment in primary care so the resources are already there on the ground," said Mooney. "That's to help people so people have got access to resources that enable them to manage themselves during an epidemic."