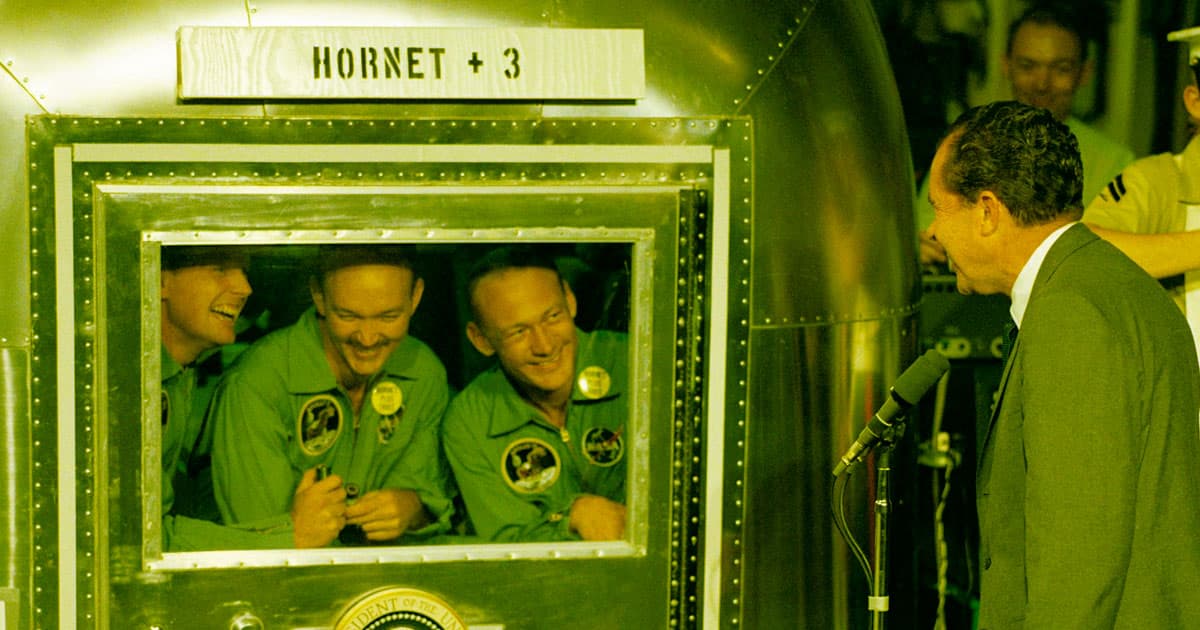 Buzz Aldrin has had plenty of experience.

Buzz Aldrin has had plenty of experience.

When Ars Technica senior space reporter Eric Berger asked Buzz Aldrin, the second man to have walked the Moon in 1969, what he would do while practicing social distancing during the coronavirus outbreak, Aldrin had some choice words: "Lying on my ass and locking the door."

Aldrin is familiar with the concept of spending time in quarantine. After the Apollo 11 Command Module landed, he, along with commander Neil Armstrong and module pilot Michael Collins, had to spend three long weeks in quarantine to make sure no nasty bugs from space could spread on our planet.

The three men were first moved to the Mobile Quarantine Facility, a converted Airstream trailer — pretty tight quarters for three adults. They were then airlifted to a secure building called the Lunar Receiving Laboratory. Years later, once the Moon was proven to be barren of life, NASA discontinued this practice after Apollo 14.

When Berger asked Aldrin for some advice for the millions of people currently self-isolating at home, the now 90-year-old former astronaut reminisced of his own time in quarantine. "Well, Mike Collins and I used to exercise and jog a little bit around the hallway."

Aldrin also questioned if his and his team's temporary home was really capable of holding microbes in.

"We looked at this one crack in the floor, and there were ants crawling in and out," Aldrin said.

Most of the rest of his time, he said, was spent doing paperwork.

READ MORE: Buzz Aldrin has some advice for Americans in quarantine [Ars Technica]

No Scope
People Are Furious at Space Telescope's Homophobic Name Again
7. 13. 22
Read More
DIY NASA
Amateur Rocket Builders Planning to Launch Astronaut Into Space
2. 1. 22
Read More
Sexy Masks
Study: Face Masks Make People Look More Attractive
1. 13. 22
Read More
+Social+Newsletter
TopicsAbout UsContact Us
Copyright ©, Camden Media Inc All Rights Reserved. See our User Agreement, Privacy Policy and Data Use Policy. The material on this site may not be reproduced, distributed, transmitted, cached or otherwise used, except with prior written permission of Futurism. Articles may contain affiliate links which enable us to share in the revenue of any purchases made.
Fonts by Typekit and Monotype.