When Astronauts Got Sick on an Apollo Mission, It Was a Disaster 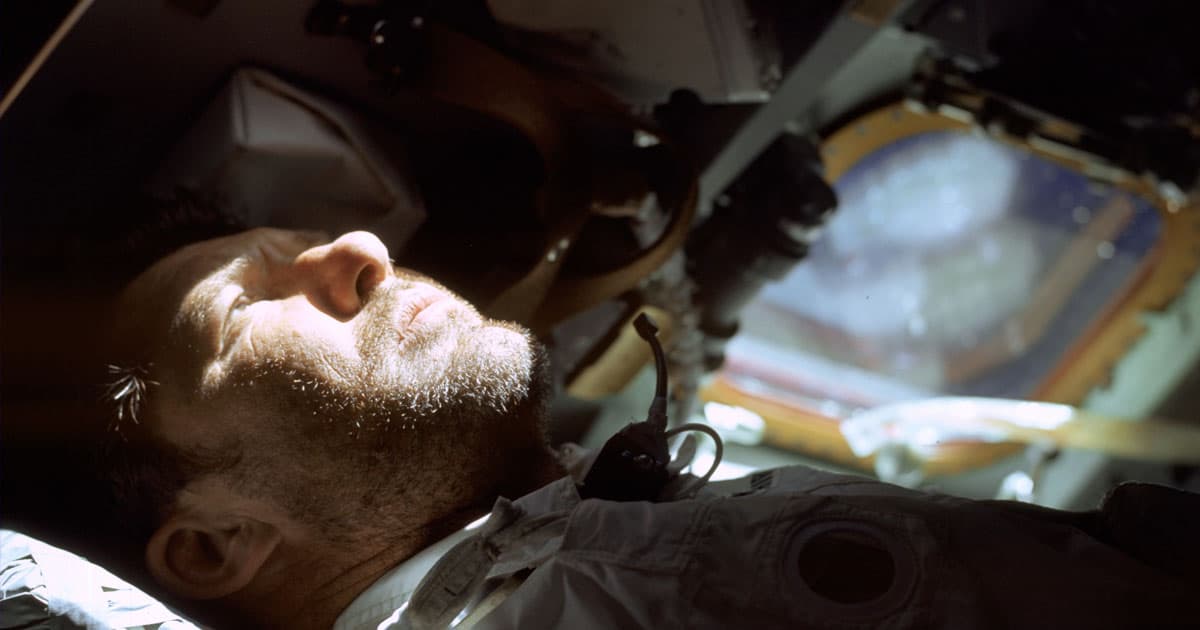 While NASA astronauts Bob Behnken and Doug Hurley have completed long periods of pre-flight quarantine to ensure they don't bring the coronavirus with them to the International Space Station during their scheduled departure this week, they wouldn't be the first humans to bring germs with them into space.

Becoming sick in space can quickly become dangerous, since medical help can be hours, days, or even weeks away.

Case in point, one of the earliest examples of space travelers becoming ill was during the Apollo 7 mission in 1968, when NASA astronaut Wally Schirra came down with a bad head cold.

"It quickly turned our cozy little spacecraft into a used Kleenex container," fellow astronaut and pilot Walter Cunningham said in an account, as reported by the History channel.

In zero gravity, mucus can't simply escape and drain out of the nasal passages. Blowing your noise only makes matters worse.

It got so bad, in fact, that the Apollo 7 crew even refused to wear their helmets during landing, going against ground control's protocol, because Schirra wanted to be able to clear his nose.

Since then, astronauts have caught more colds, and even upper respiratory, urinary tract, and skin infections.

Infections aren't the only threat. While we're only beginning to understand the effects of microgravity on the human body, we're already finding that prolonged exposure can lead to their own set of problems.

In January, a NASA astronaut had to be remotely treated for a dangerous blood clot that developed in their jugular vein, a major blood vessel on the side of the neck. Luckily, blood thinners on board the ISS were able to mediate the problem.

It likely won't be an isolated incident either. A study of 11 healthy astronauts on the ISS found that blood flow had either stagnated or reversed in the left internal jugular vein in six otherwise healthy crew members.

And if worst comes to worst, researchers found that the most effective method to administer CPR in case of cardiac arrest in zero gravity was the "handstand" maneuver, as CNN reported back in 2017.

That maneuver involves pushing the giver's back into the chest of the recipient by kicking off from a wall, crushing them into the opposite wall. A backup technique, called the Evetts-Russomano method, involves wrapping the giver's knees around the recipient's chest and applying compressions using outstretched arms.

READ MORE: Getting sick in space: How would NASA handle an astronaut disease outbreak? [Space.com]

More on being sick in space: NASA WORRIED ASTRONAUTS COULD SPREAD CORONAVIRUS ON SPACE STATION

1.08.23 Studies
A Brief List of Horrifying Things Space Travel Does to the Human Body
9.22.22
NASA Reportedly Concerned That Astronauts Will Get Pregnant in Space
9.06.22 Genetics
Scientists Found Genetic Mutations in Every Astronaut Blood Sample They Studied
7.02.22
Disturbing Discovery Finds That Space Does Something Bad to Astronauts' Bones
1.15.22
Space Is Wreaking Havoc on Astronauts' Blood