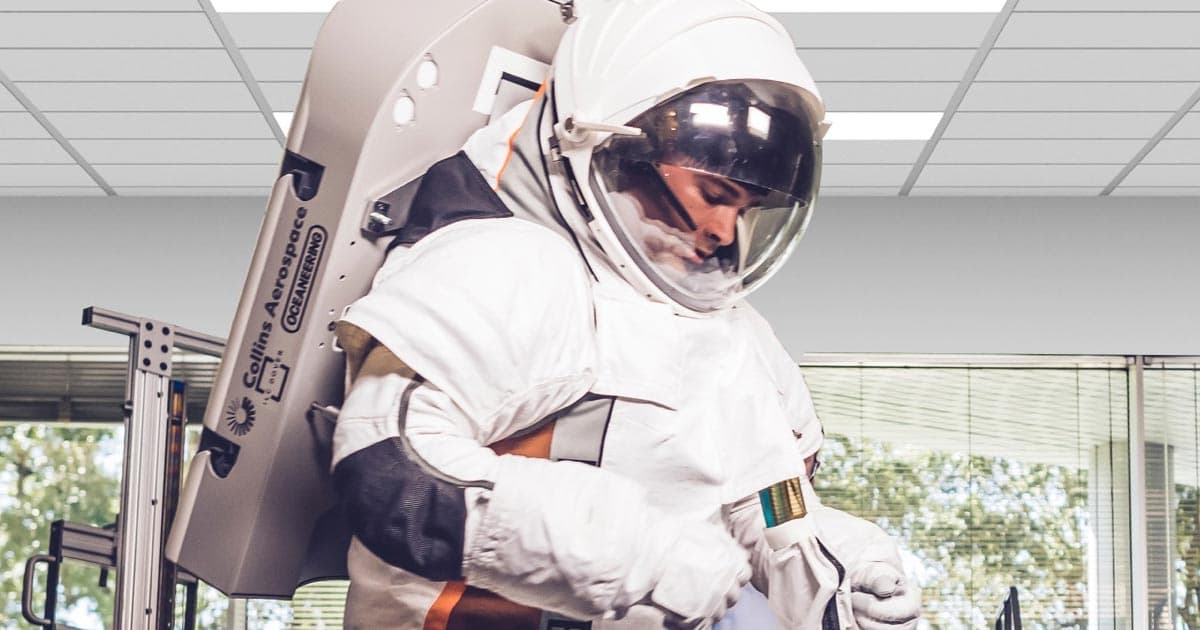 In a press frenzy on Wednesday, NASA revealed that Axiom Space and Collins Aerospace will provide new-and-improved — and very expensive — spacesuits for the upcoming Artemis Moon landings.

This information is a pretty big deal, which is why observers felt a little disappointed when neither NASA nor the contractors produced any actual imagery of the fits.

Since the announcement, though, we got a sneak peek at the Collins suits. Honestly? Kinda fire.

The suit, shown above, and the below rendering do appear to be more streamlined than the marshmallow-esque uniforms of astronauts past. Which checks out, given that Collins Aerospace's Dan Burbank — a senior technical fellow at the company, not to mention former NASA astronaut — said during a press conference that they're going for a sportier, outdoorsy vibe. Moon hike, anyone?

NASA has also made clear that the ensembles in development must be able to fit a variety of body types, as the Artemis III landing, planned for 2025, will be a major moment for diversity in space travel.

"When we get to the Moon, we will have our first person of color and our first woman that will be wearers and users of these suits in space," said Vanessa Wyche, director of NASA’s Johnson Space Center in Houston, during the press conference.

Though not much technical detail has been disclosed, there's clearly much to be excited about.

At the end of the day, visiting Earth's OG satellite is cool — but it's even better if you look fresh doing it.

Read This Next
Little Boxes
One Silly Little Detail Is Reportedly Delaying Artemis II by Years
Putting Things In Perspective
Amazing Artemis Photo Shows Every Human, Alive or Dead, Plus the Moon
Monkey Business
China Plans to Send Monkeys to Space Station to Have Sex With Each Other
Overview Effect
William Shatner Says His Space Trip Left Him With a Feeling of Terrible Grief
Mo' Money Mo' Problems
New Government Report Is Extremely Bad News for NASA
More on Off World
Cubesat Death
10:04 PM on the byte
Another Satellite Released by NASA's Artemis I Just Croaked
Kilonova Blast
9:27 PM on futurism
Staggering Galactic Explosion Blamed on Black Hole Collision
Big Boi
4:21 PM on the byte
Epic Artemis Video Shows the Astonishing Size of the Moon
READ MORE STORIES ABOUT / Off World
Keep up.
Subscribe to our daily newsletter to keep in touch with the subjects shaping our future.
+Social+Newsletter
TopicsAbout UsContact Us
Copyright ©, Camden Media Inc All Rights Reserved. See our User Agreement, Privacy Policy and Data Use Policy. The material on this site may not be reproduced, distributed, transmitted, cached or otherwise used, except with prior written permission of Futurism. Articles may contain affiliate links which enable us to share in the revenue of any purchases made.
Fonts by Typekit and Monotype.