It could accelerate Mars exploration at a fraction of the cost of current missions. 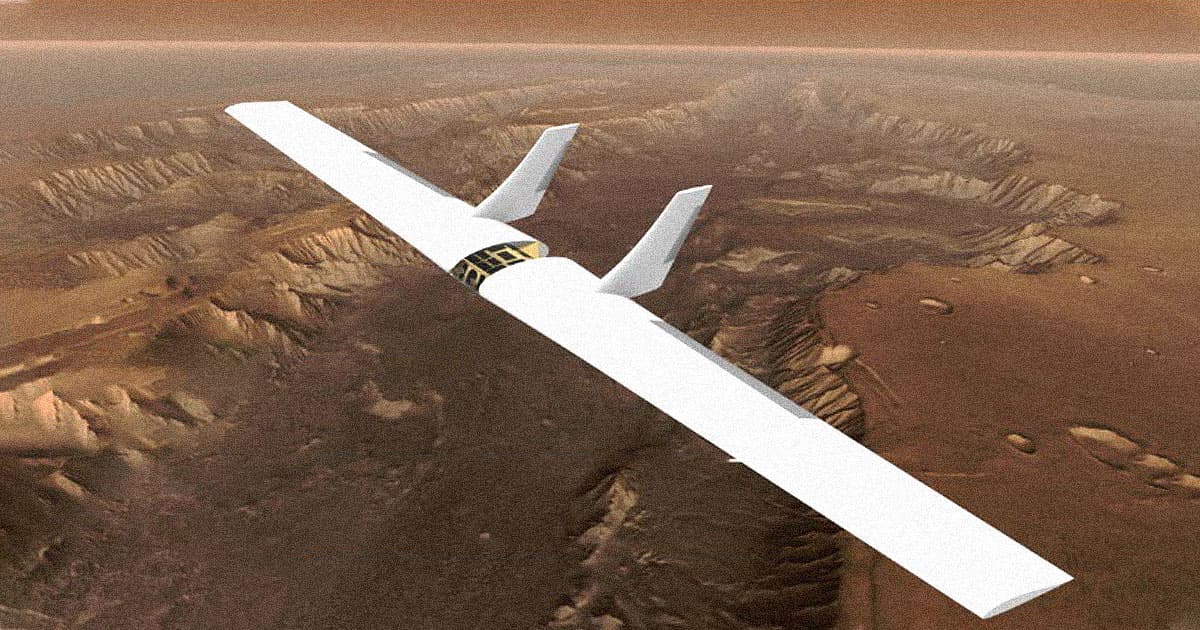 Image by University of Arizona

But researchers at the University of Arizona say they have a better concept that would cost a fraction of those technologies: an inflatable sailplane that weighs just 11 pounds (5 kg) and sports a wingspan of 18.7 feet (570 cm), that'll cruise high above the Martian landscape and survey from a bird's eye view.

The clever design, available as a preprint on the arXiv database, would travel to the Red Planet on a cubesat. Then a small atmospheric entry spacecraft would bring it down to the Martian surface, where a telescopic boom would hold the sailplane up as it unfurls its rolled-up wing structure by pumping nitrogen gas into special compartments.

Most of the wing structure will be covered in a UV-sensitive material that hardens when exposed to sunlight. After about an hour of UV-curing, the sailplane will have enough structural integrity to deploy.

A cold-gas propulsion system will allow it to take to the skies at an altitude of 5,900 feet.

The sailplane could also assist other missions or even find suitable places for future human habitation on the Red Planet.

"The Mars sailplane concept proposed here provides a whole new avenue for accelerating exploration of the Martian surface at a fraction of the cost of previous Mars airplane concepts," reads the paper.

Read This Next
A Sip of Opal
NASA Discovers Precious Gemstones on Mars
Martian Oases
Scientist Proposes Growing a Forest Inside a Bubble on Mars
Big Impact
Meteorite Hit Mars So Hard NASA Thought It Was a Quake
Palliative Care
NASA's Mars Lander Refuses to Die Even Though It's Supposed To
Signs Of Life
NASA Seems Awfully Excited About Finding Organic Matter on Mars
More on Off World
Heavy Metal
Yesterday on the byte
NASA Mars Rover Finds Metallic Object That Smashed Down on Surface
Small But Mighty
Yesterday on the byte
Baby Asteroid Photobombs James Webb On Accident
Little Guy
Yesterday on the byte
Scientists Prototype "Creeping" Lizard-Like Robot for Exploring Mars
READ MORE STORIES ABOUT / Off World
Keep up.
Subscribe to our daily newsletter to keep in touch with the subjects shaping our future.
+Social+Newsletter
TopicsAbout UsContact Us
Copyright ©, Camden Media Inc All Rights Reserved. See our User Agreement, Privacy Policy and Data Use Policy. The material on this site may not be reproduced, distributed, transmitted, cached or otherwise used, except with prior written permission of Futurism. Articles may contain affiliate links which enable us to share in the revenue of any purchases made.
Fonts by Typekit and Monotype.