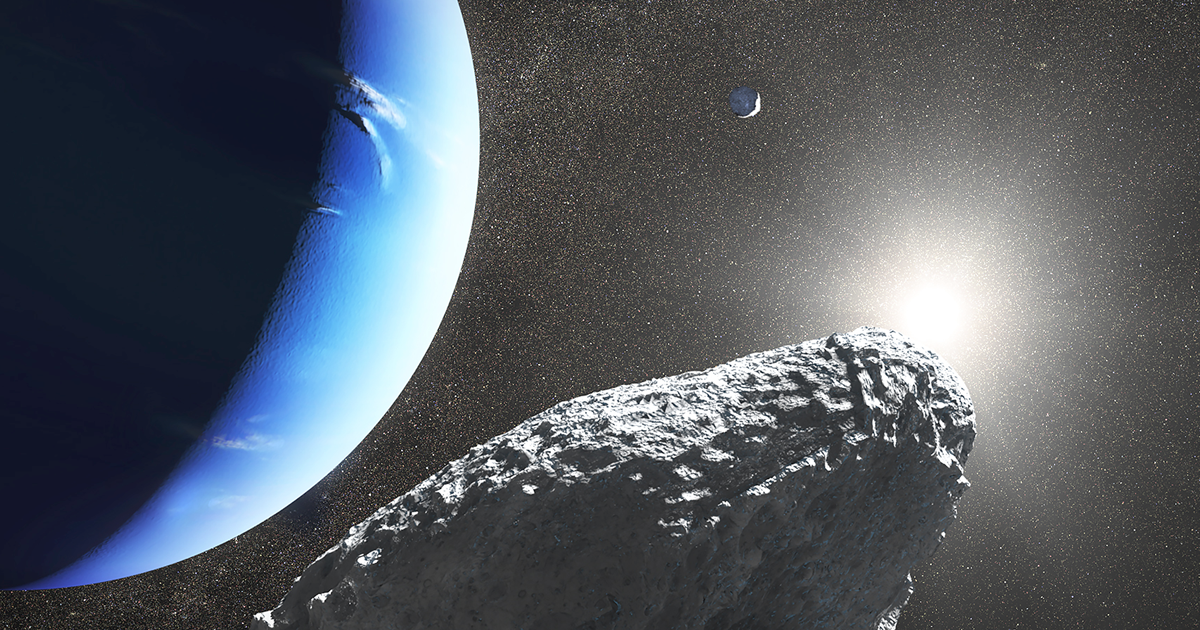 Meet Hippocamp, “The Moon That Shouldn’t Be There”

Neptune's tiniest moon was likely once a part of its second biggest.

Neptune's tiniest moon was likely once a part of its second biggest.

In 2013, scientists discovered a tiny moon orbiting Neptune. They gave it the forgettable name S/2004 N 1, but it soon earned the nickname of "the moon that shouldn't be there," because its size and placement didn't make sense to astronomers.

Now, a team of planetary scientists has not only given Neptune's 14th moon a more memorable moniker — Hippocamp — but also unraveled some of the mystery surrounding its origin.

In a paper published on Wednesday in the journal Nature, the researchers shared the results of several years of analysis about Neptune's tiniest moon.

According to their research, Hippocamp is just 20 miles in diameter and a thousandth of the mass of Proteus, the much-larger moon next to it. It also zips around Neptune at a speed of about 20,000 miles an hour, which is 10 times faster than our Moon circles Earth.

The new name, meanwhile, refers to a mythological sea creature that's half-horse and half-fish — fitting for a moon orbiting the planet named after the Roman god of the sea.

So that's what the researchers learned about Hippocamp, but it doesn't answer the question as to why "the moon that shouldn't be there" is there.

The answer, according to the researchers, is that it probably wasn't always.

If Hippocamp was around 4 billion years ago, Proteus would have likely destroyed the smaller moon while clearing its orbit around Neptune. This led the researchers to conclude that Hippocamp likely formed when a chunk of Proteus broke off following a collision with a comet or asteroid.

"This is the first really great example of a moon that got created as a result of an impact," researcher Mark Showalter told Space.com.

More on the Moon: New Research: Earth’s Atmosphere Extends Well Beyond the Moon

Moon Sims
Brutal Video Simulates When Earth Hit Another Planet Many Years Ago
Oct 6
Read More
So Close But So Far
Astronomers May Have Spotted a New Planet Around the Nearest Star
2. 10. 21
Read More
Big Moon Vat Energy
Astronomers Propose Giant "Liquid Mirror" Telescope on the Moon
11. 17. 20
Read More
+Social+Newsletter
TopicsAbout UsContact Us
Copyright ©, Camden Media Inc All Rights Reserved. See our User Agreement, Privacy Policy and Data Use Policy. The material on this site may not be reproduced, distributed, transmitted, cached or otherwise used, except with prior written permission of Futurism. Articles may contain affiliate links which enable us to share in the revenue of any purchases made.
Fonts by Typekit and Monotype.