A swirling vat of reflective liquid on the Moon's surface could allow us to study the moments following the Big Bang. 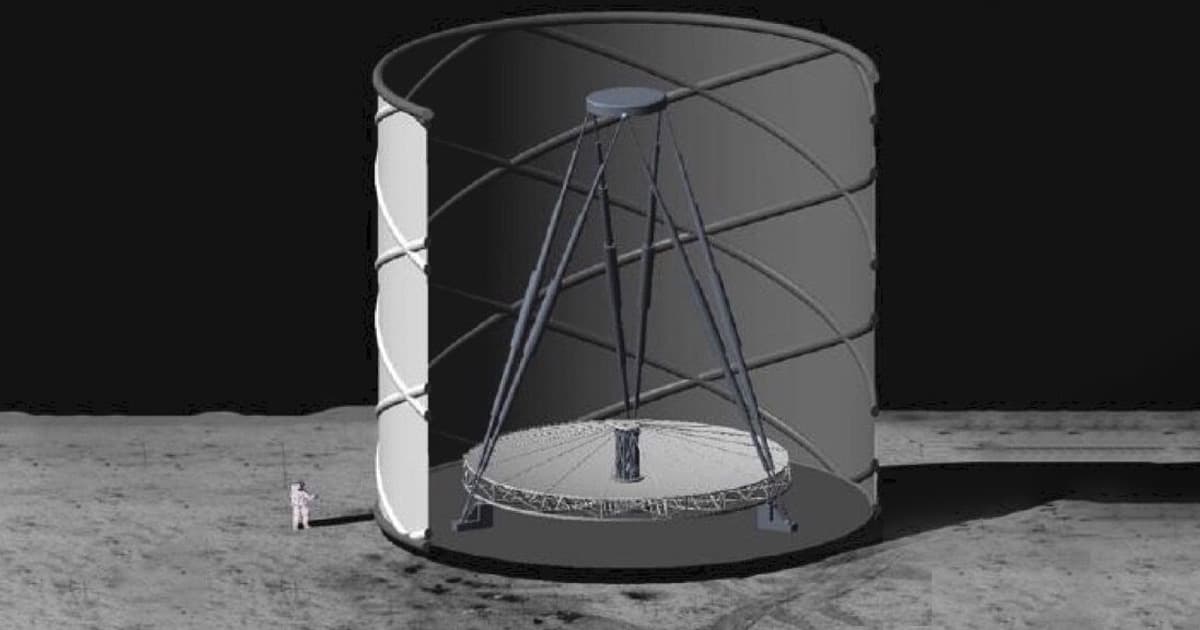 A team of astronomers from The University of Texas at Austin are bringing a truly moonshot concept back from the grave: a liquid-mirror telescope 100 meters in diameter, built on the surface of the Moon.

Scientists first proposed the concept, dubbed the "Ultimately Large Telescope," over a decade ago in a 2007 paper published in the journal Nature. Instead of a solid mirror, a metallic and reflective liquid layer — mercury has been used for this kind of application in the past — would float on top of a massive tank of another, swirling liquid.

The idea is to peer back into the early moments following the creation of the observable universe, far from the distracting hustle and bustle of Earth.

"In this case we have shown how the Moon is ideal [for] using liquid mirror technology to build a telescope much larger than we can affordably build in space," Pete Worden, director of NASA Ames Research Center at the time, and a co-author of the paper, said in a 2007 statement.

"Such telescopes, perhaps 100 meters in diameter can see back to the early phases of the universe after the Big Bang," Worden added.

NASA abandoned the idea shortly after it was proposed. But now, a team of astronomers led by NASA Hubble Fellow Anna Schauer have decided to revive the concept, as detailed in a new paper appearing in an upcoming issue of The Astrophysical Journal.

"Throughout the history of astronomy, telescopes have become more powerful, allowing us to probe sources from successively earlier cosmic times — ever closer to the Big Bang," University of Texas at Austin astronomer and co-author Volker Bromm said in a statement. "The upcoming James Webb Space Telescope [JWST] will reach the time when galaxies first formed."

"But theory predicts that there was an even earlier time, when galaxies did not yet exist, but where individual stars first formed — the elusive Population III stars," Bromm explained. "This moment of ‘very first light’ is beyond the capabilities even of the powerful JWST, and instead needs an ‘ultimate’ telescope."

The massive proposed telescope would operate autonomously from the surface of the Moon, collecting power from solar power stations nearby. The data it receives would then make it back to Earth via a satellite in lunar orbit.

Rather than constructing the massive 100-meter dish out of coated glass, the team suggests to use liquid instead. Not only would it make it easier to construct on the Moon, it would be significantly cheaper as well.

The telescope would be built inside a crater near either of the Moon's poles, allowing it to gaze at the same points in the sky continuously.

More on telescopes on the Moon: NASA Funds Giant Radio Telescope Concept on Far Side of Moon

Read This Next
Moon Sims
Brutal Video Simulates When Earth Hit Another Planet Many Years Ago
Moon Juice
There's One Big Problem With NASA's Moon Water Announcement
Better Start Digging
Harvard Study: We Shouldn't Rule Out Underground Life on the Moon and Mars
Digging a Hole
NASA Discovers Huge Potential Caches of Metal On the Moon
Theia is Alive
Fragment of Planet That Hit Earth May Be Buried Inside Moon
More on Hard Science
Warped Tour
Yesterday on futurism
Professor Believes Door to Warp Drive May Lie With Ethylene Glycol
Sky Bursts
Yesterday on the byte
Astronomers Intrigued by 25 Mysterious Repeating Radio Signals From Deep Space
Tractor Beam
Jan 26 on the byte
Scientists Build Working Tractor Beam, Although It's Comically Tiny
READ MORE STORIES ABOUT / Hard Science
Keep up.
Subscribe to our daily newsletter to keep in touch with the subjects shaping our future.
+Social+Newsletter
TopicsAbout UsContact Us
Copyright ©, Camden Media Inc All Rights Reserved. See our User Agreement, Privacy Policy and Data Use Policy. The material on this site may not be reproduced, distributed, transmitted, cached or otherwise used, except with prior written permission of Futurism. Articles may contain affiliate links which enable us to share in the revenue of any purchases made.
Fonts by Typekit and Monotype.