A radio telescope on the far side of the Moon could be perfect for hunting aliens. 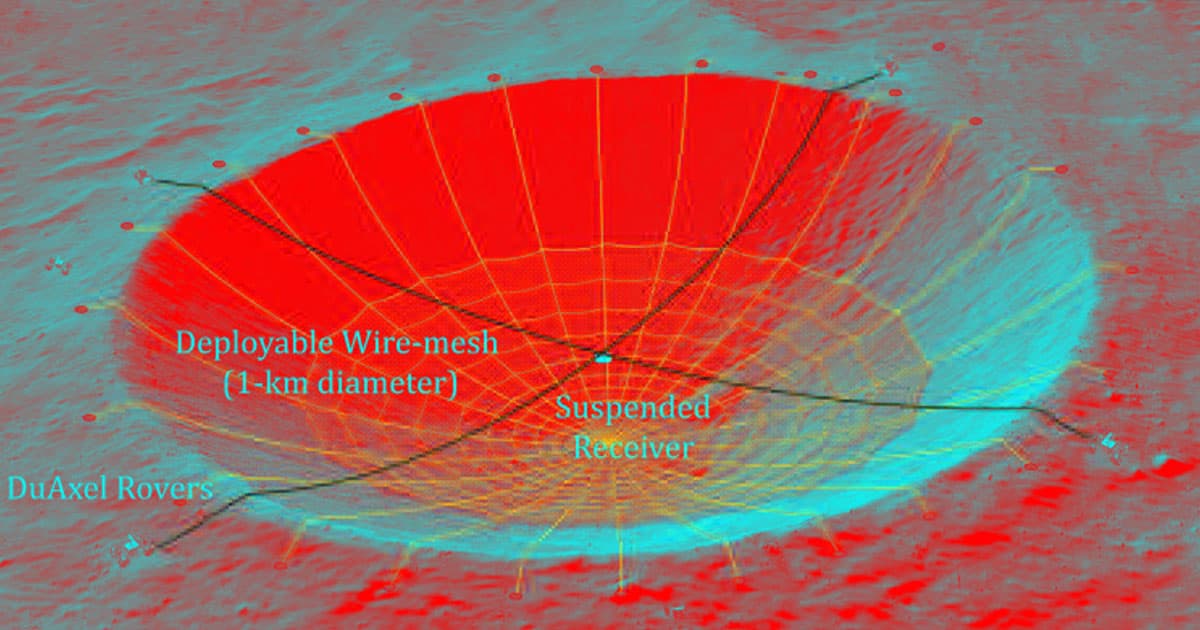 NASA is funding research for a giant radio telescope in a crater on the far side of the Moon.

The NASA Innovative Advanced Concepts (NIAC) Program, an incubator for radically futuristic and otherworldly concepts, has awarded a Phase 1 grant for what the agency calls the Lunar Crater Radio Telescope (LCRT) — an exciting idea that could be a major turning point in the search for extraterrestrial intelligence, as Wired's space and energy reporter Daniel Oberhaus pointed out on Twitter.

According to a description by research lead Saptarshi Bandyopadhyay, robotics technologist at NASA's Jet Propulsion Laboratory in California, the idea is to capture the "tremendous advantages compared to Earth-based and Earth-orbiting telescopes" on the far side of the Moon, where researchers could observe the universe at much greater wavelengths than are normally reflected by Earth's atmosphere.

These greater-than-10-meter long wavelengths have yet to be probed by humans and "could enable tremendous scientific discoveries in the field of cosmology," according to Bandyopadhyay.

The Moon also "acts as a physical shield that isolates the lunar-surface telescope from radio interferences/noises from Earth-based sources... during the lunar night." And when the Earth stands between the Sun and Moon, the area facing the far side of the Moon acts as a kind of low noise radio emission shadow.

The moonshot proposal — get it? — includes plans for a wire-mesh, a kilometer in diameter, that would be deployed by wall-climbing robots inside a large lunar crater. In other words, the plan is to cast a spider web-like mesh over an existing crater on the far side of the Moon to turn it into a gigantic radio telescope.

"This Lunar Crater Radio Telescope (LCRT), with 1km diameter, will be the largest filled-aperture radio telescope in the Solar System!" reads the description.

The idea has been around for a number of years, with researchers arguing it could prove to be an extremely important scientific endeavor.

The news comes also comes after China successfully deployed a radio telescope attached to a communications relay satellite that is now in operation on the far side of the Moon. The radio frequencies it's sensitive to are, however, far shorter.

Read This Next
Into Darkness
Inside NASA's Bold Proposal to Probe the Mysteries of Dark Matter
Martian Ammonia
NASA Rover Detects Organic Molecules on the Surface of Mars
Myanus, Hisanus, Heranus...
Here's What Uranus Scientists Think About Your Disgusting Jokes
Joseph Strikes Again
Experts Shred Paper Claiming to Identify Mushrooms on Mars
Mars Shrooms
Extremely Dubious Research Claims to Spot Fungus Growing on Mars
More on Hard Science
Reel Big Dish
5:33 PM on the byte
Brilliant Scientists Decide to Name the World's Largest Telescope "SKA"
Horrible Geese
Dec 4 on futurism
Furious Geese Are Defeating Humans, Scientists Find
Quacks Like a Duck
Dec 1 on futurism
Those Headlines About Scientists Building a Wormhole Are Total Nonsense, People
READ MORE STORIES ABOUT / Hard Science
Keep up.
Subscribe to our daily newsletter to keep in touch with the subjects shaping our future.
+Social+Newsletter
TopicsAbout UsContact Us
Copyright ©, Camden Media Inc All Rights Reserved. See our User Agreement, Privacy Policy and Data Use Policy. The material on this site may not be reproduced, distributed, transmitted, cached or otherwise used, except with prior written permission of Futurism. Articles may contain affiliate links which enable us to share in the revenue of any purchases made.
Fonts by Typekit and Monotype.