Here's What Uranus Scientists Think About Your Disgusting Jokes

"If the public thinks it's a joke, the next thought in that thread is 'Do they think it's a waste of money?'" 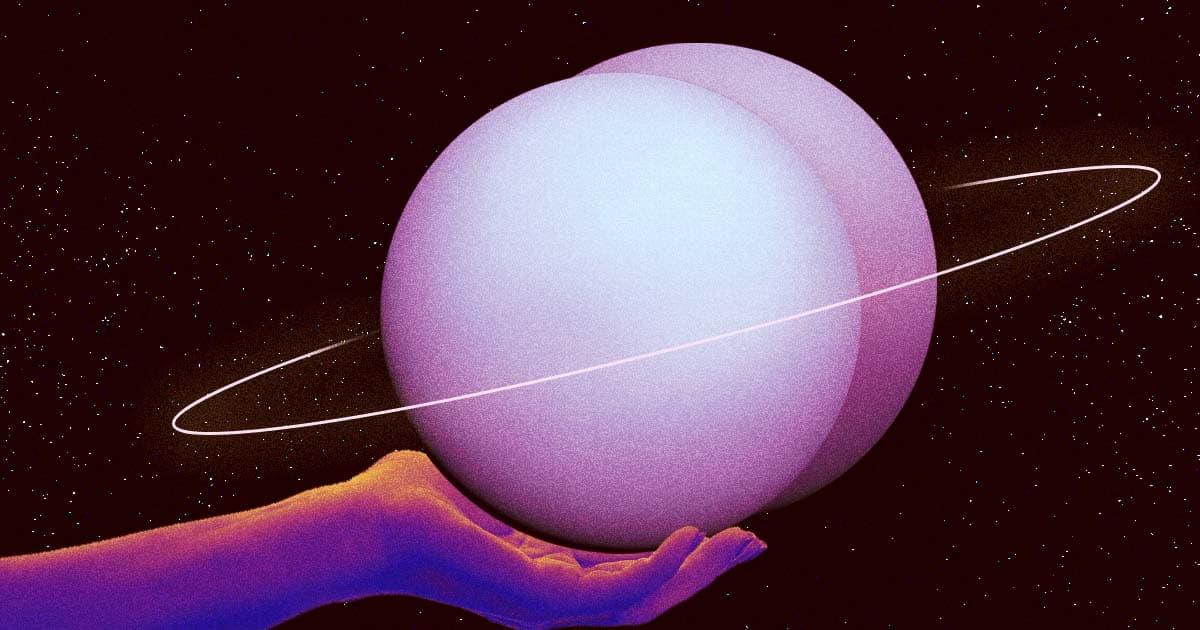 Uranus is a fascinating place.

Planetary scientists are captivated by the ice giant's unusual methane-rich atmosphere, sporadic weather, and magnetic field that interacts with the Sun all the way from its distant orbit.

And, unfortunately, it also has a name that lends itself really well to dirty jokes. It can be pronounced either "urine-us" or "your-anus," both of which open up endless possibilities for potty humor.

"NASA Data Shows Something Leaking Out of Uranus," read one Futurism headline that resonated with readers last year. Scientists have also miscellaneously found that Uranus expels gas, harbors mysterious fluids, and forms puzzling "mushballs." In some cases, it feels impossible to avoid sounding risqué, even if you try.

The phenomenon might be sophomoric, but it raises an intriguing question: what do the scientists who've dedicated academic careers to studying Uranus make of all this crude humor?

"I think at first I found it quite frustrating," Lancaster University researcher Chris Arridge told Futurism. "There was a little bit of that 'We're doing serious stuff here,' and we're trying to push for a mission to a really scientifically interesting place. And in some sense, the butt jokes — do they devalue that in some sense? Does it make it less likely that you end up with a new space mission to study somewhere that many of us who study planets think is a really important piece of the puzzle to understanding our solar system?"

Arridge said that he's gradually softened up on the jokes, but he also raised an alarming possibility: that lowbrow humor about the planet could undermine public funding for genuine research into it.

"Ultimately the public pays the vast majority of this work," Arridge said. "The public is invested and the public is a major stakeholder. So it's a little bit symbiotic. If your stakeholder thinks it's a big joke, I think that can be a concern for some people."

Arridge clarified that he doesn't personally feel this way, but he understood the concerns and wanted to articulate them all the same.

"If the public thinks it's a joke," he added, "the next thought in that thread is 'Do they think it's a waste of money?'"

Another concerned astronomer is Heidi Hammel, a prominent Space Science Institute and Planetary Society astronomer and a top expert on Neptune and Uranus, who helped craft NASA's 2010 decadal survey, in which she issued a full-throated recommendation for NASA to visit Uranus.

"I truly do worry that it will make it difficult to actually get a mission to study this planet because I think that NASA would be sensitive to these headlines," Hammel told Futurism, "and sensitive to all the ridicule that they would get if they wanted to get a mission to this planet. We do want to send atmospheric probes, and we do call them probes, and it's impossible to separate that from the whole aliens probing humans thing."

"The really serious thing is that I do think it could hamper our ability to get a mission to this planet," she added. "I don't think that's insurmountable, but it's something that we worry about. Maybe we'll just go to Neptune so we don't have to worry about the whole thing."

Still, Hammel continues to stand behind the scientific arguments for a mission to Uranus. She conceded that there hasn't been a tangible indication that Uranus jokes pose a threat to such a mission, but she believes there's reason for concern.

As of this article's publication, multiple NASA spokespeople haven't responded to Futurism's specific questions about whether there's any validity to those concerns, but most of the astronomers Futurism spoke to think that those concerns are just overly cautious researchers blowing innocuous jokes out of proportion.

"There are a couple of people whose opinions I respect and whose knowledge of how things really work in Washington DC is much greater than mine," NASA Jet Propulsion Laboratory planetary scientist Mark Hosfstadter, who published a 2019 paper arguing for a mission to Uranus, told Futurism. "They will say that when you go to Congress and try to argue for funding, you will take a hit because of the word Uranus. And for that reason, if you want to study an ice giant, it's better to go to Neptune."

"That argument, I dislike," Hofstadter continued. "I will accept any scientific argument that says 'oh if you want to study an ice giant, Neptune is more important because of dot dot dot,' and the answer is usually [its moon] Triton. That's an argument that I can accept and respect. But to say that I'm going to choose a mission to Neptune over a mission to Uranus just because of the name, I don't think that's a good reason."

But for the most part, Hofstadter said, it's all in good fun. His wife, he said, once bought him a t-shirt emblazoned with the claim that "63 Earths can fit inside Uranus. 64 if you relax."

"There's a joking t-shirt that conveyed a fact about the planet! So that's okay by me," he said. "It's the same as this sort of tongue-in-cheek title you used. It's a way to get people to relax and learn something about science."

Many other Uranus scientists also enthusiastically supported nasty jokes about their favorite gas giant. From a scientific communication point of view, several said, a sense of humor can even be a winning strategy.

"I guess, coming from the general public I kind of love it," University of California astronomy PhD candidate Ned Molter told Futurism. "I think it's good to get engagement in my work in any way. That's sort of the way that I see it. Obviously, do the jokes get really tired and repetitive? Absolutely. But the thing is, the fraction of the time that I talk to the public about my work is small enough where it doesn't affect me that much. I wouldn't say I get frustrated at all. It starts a conversation."

And when journalists have some fun with the topic? That's also fine by Molter.

"If that's the clickbait that people want, they learn something!" Molter said. "Ninety percent of people might be 'Ha ha, that's hilarious' and ten percent will go 'Oh that’s really interesting.' I think it can only help, really."

It's also just good to have a sense of humor about your work, scientists said.

"To me, astrophysics seems like everyone's having fun," University of Zurich PhD candidate Deniz Soyuer told us. "We make these jokes all the time, and not just about Uranus. There are a bunch of objects in the universe. There are also 'yo mamma' jokes about black holes and stuff."

Soyuer wondered aloud whether there was a generational split that might explain why some astronomers get bothered by the jokes, adding that he and his peers are from the "internet generation" and "laugh at anything."

One thing that all seven experts we talked to, all of whom have published research on Uranus, agreed on is that both ice giant planets planets — Uranus and Neptune — are immensely important from a scientific standpoint yet constantly get overlooked. Only one spacecraft, Voyager 2, has ever flown past Uranus and Neptune, and that was nearly 40 years ago.

"Neptune and Uranus are ridiculously underexplored compared to what we call the gas giants, Jupiter and Saturn," Soyuer said.

Even the scientists who were more critical of Uranus jokes said that they saw the value in humorous scientific communications, arguing that they could help breathe life into a field otherwise dominated by extremely dense and technical papers and research.

"It would be quite a boring world if it was all fairly dull and bland and factual," Arridge said. "I do see these articles about Uranus and leaking fluids and it gives me a chuckle from time to time."

More on Uranus: NASA Data Shows Something Leaking out of Uranus

Read This Next
Space Lumps
Scientists Say We May Be Extremely Wrong About the Universe
Into Darkness
Inside NASA's Bold Proposal to Probe the Mysteries of Dark Matter
Martian Ammonia
NASA Rover Detects Organic Molecules on the Surface of Mars
Joseph Strikes Again
Experts Shred Paper Claiming to Identify Mushrooms on Mars
Mars Shrooms
Extremely Dubious Research Claims to Spot Fungus Growing on Mars
More on Hard Science
Warped Tour
Yesterday on futurism
Professor Believes Door to Warp Drive May Lie With Ethylene Glycol
Sky Bursts
Yesterday on the byte
Astronomers Intrigued by 25 Mysterious Repeating Radio Signals From Deep Space
Tractor Beam
Jan 26 on the byte
Scientists Build Working Tractor Beam, Although It's Comically Tiny
READ MORE STORIES ABOUT / Hard Science
Keep up.
Subscribe to our daily newsletter to keep in touch with the subjects shaping our future.
+Social+Newsletter
TopicsAbout UsContact Us
Copyright ©, Camden Media Inc All Rights Reserved. See our User Agreement, Privacy Policy and Data Use Policy. The material on this site may not be reproduced, distributed, transmitted, cached or otherwise used, except with prior written permission of Futurism. Articles may contain affiliate links which enable us to share in the revenue of any purchases made.
Fonts by Typekit and Monotype.