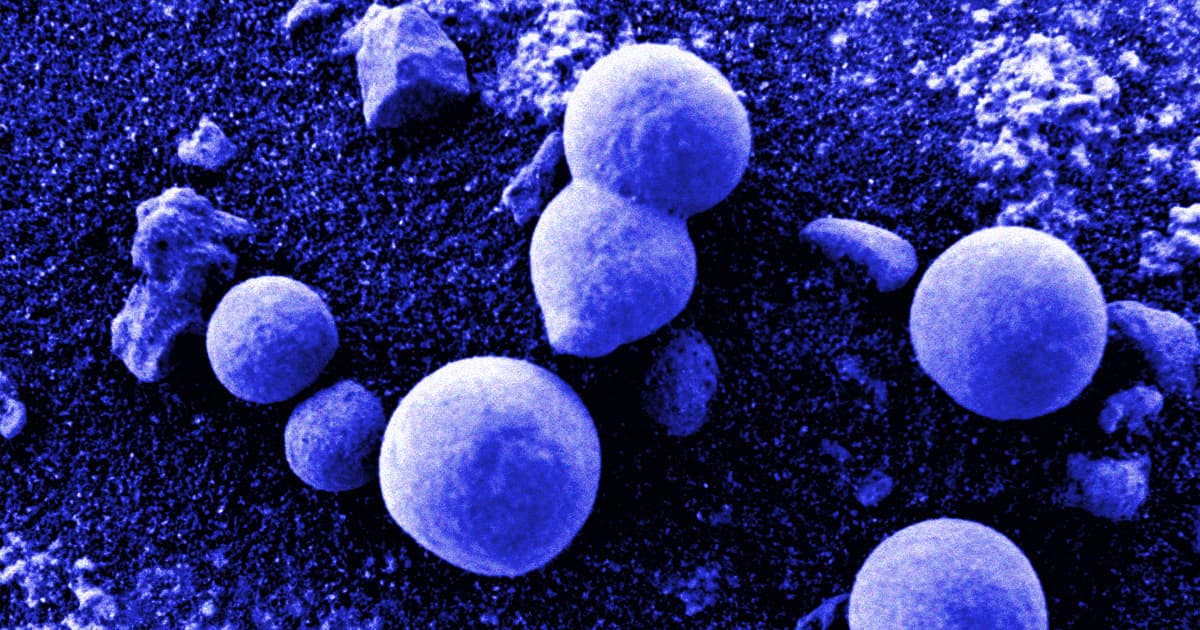 It’s the perfect headline: in a new paper, a group of scientists laid out “evidence” for why they think NASA’s rovers and Mars orbiters have already collected photographic evidence of fungi on Mars. Could those bubble-shaped rocks really be puffball-like growths, basking in the radiation battering down on the desolate Martian surface?

“The conditions on Mars are so extreme that you’re not going to see fungi or any kind of life growing at that sort of speed under conditions like coldness and low air pressure,” Jonathan Clarke, president of Mars Society Australia, told the South China Morning Post. “Life can barely survive, let alone thrive.”

Clarke also took issue with the paper claiming that mushrooms were actually growing on Mars.

“It’s just like if you go to a beach and there are shells,” he told the newspaper. “If the wind blows, the sand moves and exposes more shells. But we won’t say the shells are growing there, it’s just that they become visible.”

The paper did have some fairly impressive credentialing, with authors listed from the Smithsonian Institute and George Mason University. But as it turns out, the lead author of the paper was Rhawn Gabriel Joseph, a fringe researcher known for dubious and unscientific claims about life on other planets.

Joseph has a lengthy track record of attempting to get his research published in reputable scientific journals. At one point, he even started his own renegade journal.

Joseph did break through and get a paper published in the journal Astrophysics & Space Science in November 2019, as Ryan points out — but it was promptly retracted after finding the paper “proffers insufficient critical assessment of the material presented and literature cited, and fails to provide a solid underpinning for the speculative statements made in the article which, in their view, invalidates the conclusions drawn.”

In other words, the journal realized its mistake, and seemingly laughed him out of the room.

Joseph’s latest paper was published in the journal Advances in Microbiology, a journal headquartered in China that’s been criticized for republishing existing articles, as Nature reported back in 2010.

And so here we are yet again, with the latest paper being shredded by the scientific community.

“Claiming that mushrooms are sprouting all over Mars is an extraordinary claim that requires better evidence than an analysis of photographic morphology by a known crank who has claimed, on the basis of the same kind of analysis, that he has seen fields of skulls on Mars,” University of Minnesota, Morris, developmental biologist Paul Myers told CNET.

In short, we have a mountain of evidence that Mars is extremely unhospitable to life as we know it on Earth. And photographic evidence is simply not nearly enough, experts say.

“We have more than photos, records, instruments that tell us what these materials are made of,” David Flannery, lecturer at the Queensland University of Technology who is a member of NASA’s Mars 2020 mission science team, told SCMP. “And we have models for the features we see around us.”

“Robots are sending back huge amounts of data,” he added. “We have plenty of information but it’s just that no one is interpreting the features that we see as something like fungi. There’s zero evidence for that.”

“This paper, which is really not credible, will be ignored by the scientific community,” Flannery said.

Advances in Microbiology has remained quiet, failing to respond to Ryan’s requests for comment.

The journal’s managing editor Zoey Yang did tell SCMP that the paper “was accepted with revisions as we received four review results from different reviewers” after peer review. “They all suggest that we accept it after some revisions.”

It’s an admittedly enjoyable daydream: the prospect of mushrooms growing on Mars would be a tremendous breakthrough in our understanding of our Solar System and humanity’s place in the universe.

But without backing up such claims with extensive evidence — and compelling support from academic peers — the findings should be treated with a grain of salt.

READ MORE: No, NASA photos are not evidence of fungus growing on Mars, sorry [CNET]

Read This Next
Water Canyon
Scientists Spot Hidden Water in Mars’ Grand Canyon
Martian Ammonia
NASA Rover Detects Organic Molecules on the Surface of Mars
Myanus, Hisanus, Heranus...
Here’s What Uranus Scientists Think About Your Disgusting Jokes
Mars Shrooms
Extremely Dubious Research Claims to Spot Fungus Growing on Mars
In Rainbows
NASA Releases Breathtaking Rover Photo of “Rainbow” on Mars
More on Hard Science
Big Yikes
Jan 12 on futurism
Turns Out Schrödinger, the Father of Quantum Physics, Was a Pedophile
That's No Moon
Jan 12 on the byte
China Building “Artificial Moon” Facility That Simulates Low Gravity With Magnets
The Shape of Things
Jan 11 on the byte
Scientists Just Discovered a Planet That’s Not a Sphere
READ MORE STORIES ABOUT / Hard Science
Keep up.
Subscribe to our daily newsletter to keep in touch with the subjects shaping our future.