The region is "packed full of water — far more water than we expected." 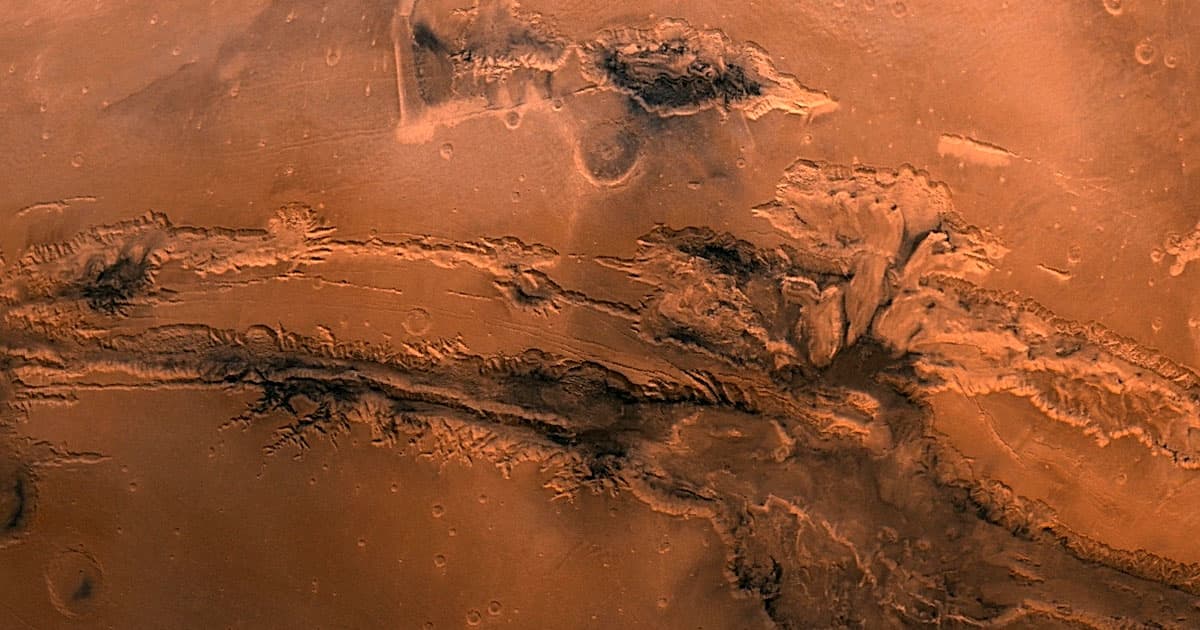 With the help of the European Space Agency's ExoMars Trace Gas Orbiter (TGO), a team of scientists has made a fascinating discovery: a huge deposit of water at the bottom of the Valles Marineris, one of the planet's deepest canyon systems and which is ten times as long and five times as deep as the Grand Canyon.

The orbiter's Fine Resolution Epithermal Neutron Detector (FREND) instrument mapped the amount of hydrogen in the topsoil covering the Martian surface down to a depth of about three feet — and struck pay dirt.

It's an unusual place spot water. Most discoveries of water on Mars to date have been found near the planet's polar regions in the form of ice.

"With TGO we can look down to one meter below this dusty layer and see what’s really going on below Mars’ surface," said Igor Mitrofanov, researcher at the Russian Academy of Sciences and lead author of the study accepted into the journal Icarus, in an ESA statement.

"FREND revealed an area with an unusually large amount of hydrogen in the colossal Valles Marineris canyon system: assuming the hydrogen we see is bound into water molecules, as much as 40 percent of the near-surface material in this region appears to be water," he added.

The area is absolutely massive, about the size of the Netherlands according to the statement, making it a highly promising place to look for even more water in the future.

"We found a central part of Valles Marineris to be packed full of water — far more water than we expected," coauthor Alexey Malakhov said in the statement. "This is very much like Earth’s permafrost regions, where water ice permanently persists under dry soil because of the constant low temperatures."

There's still a chance much of the water deposits are trapped inside minerals, but there is cause for optimism.

"Overall, we think this water more likely exists in the form of ice," Malakhov argued.

"This finding is an amazing first step, but we need more observations to know for sure what form of water we’re dealing with," the ESA's Håkan Svedhem, coauthor who used to be on the TGO team, said in the statement, calling the finding a "large, not-too-deep, easily exploitable reservoir of water in this region of Mars."

The discovery could allow us a better understanding of the early evolution of the Red Planet, and allow us to get a much better idea of where to look for signs of ancient life — or even places we could one day inhabit.

More on Mars: NASA Scientists Are Gonna Bawl Their Eyes When the Tiny Mars Chopper Dies

Read This Next
What Lies Beneath
Researchers Say "Conan the Bacterium" Could Be Hidden Beneath Mars’ Surface
Martian Ammonia
NASA Rover Detects Organic Molecules on the Surface of Mars
Joseph Strikes Again
Experts Shred Paper Claiming to Identify Mushrooms on Mars
Mars Shrooms
Extremely Dubious Research Claims to Spot Fungus Growing on Mars
In Rainbows
NASA Releases Breathtaking Rover Photo of "Rainbow" on Mars
More on Hard Science
Tractor Beam
Jan 26 on the byte
Scientists Build Working Tractor Beam, Although It's Comically Tiny
Having a Blast
Jan 18 on the byte
New Study Shows Where You Should Hide to Survive a Nuclear Attack
Offworld Amino
Jan 15 on the byte
Scientists Find Building Blocks of Life in Meteor That Smashed Into Family's Driveway
READ MORE STORIES ABOUT / Hard Science
Keep up.
Subscribe to our daily newsletter to keep in touch with the subjects shaping our future.
+Social+Newsletter
TopicsAbout UsContact Us
Copyright ©, Camden Media Inc All Rights Reserved. See our User Agreement, Privacy Policy and Data Use Policy. The material on this site may not be reproduced, distributed, transmitted, cached or otherwise used, except with prior written permission of Futurism. Articles may contain affiliate links which enable us to share in the revenue of any purchases made.
Fonts by Typekit and Monotype.