Researchers Say "Conan the Bacterium" Could Be Hidden Beneath Mars’ Surface

"In the novel experiments, Conan the Bacterium survived astronomical amounts of radiation in the freezing, arid environment." 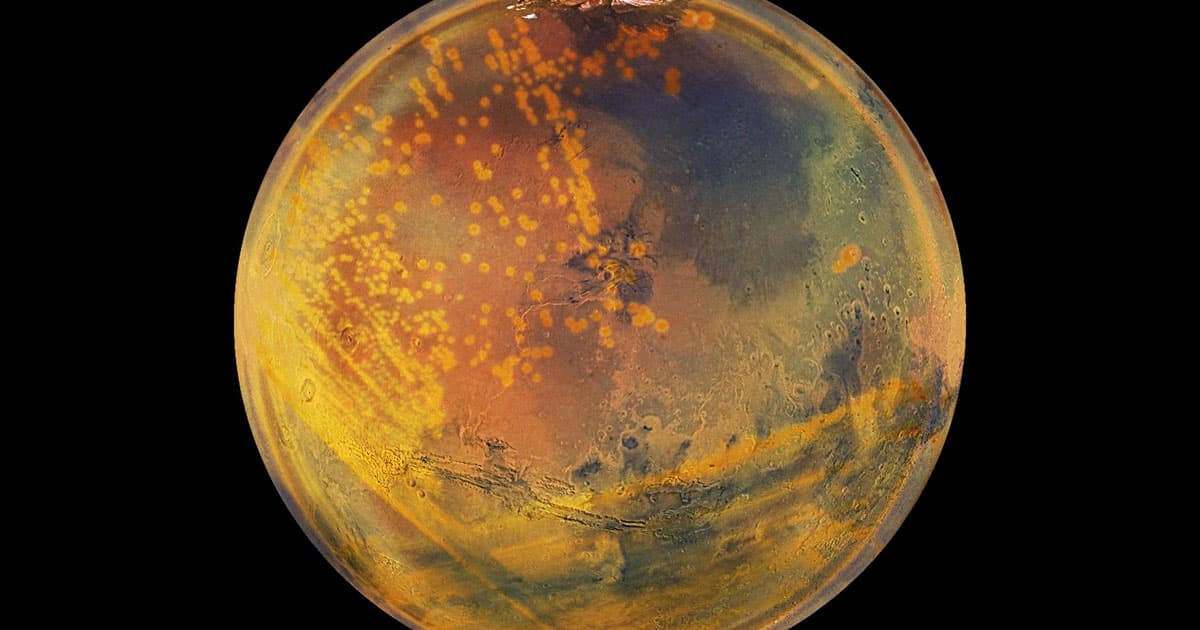 A bold new theory proposes that a super-survivor microorganism could survive under Mars' barren surface for hundreds of millions of years. The upshot? That scientists should be on the lookout for it when analyzing the latest data from the Red Planet.

In the study, researchers from Northwestern University posit that a form of bacteria found on Earth, known as Deinococcus radiodurans — which researchers have previously called "Conan the bacterium" for its uncanny ability to stay alive under some of the harshest conditions imaginable — could survive for as long as 280 million freakin' years under harsh radiation like that of Mars.

The new study builds on previous "Conan" research, which found that this ancient bacterium could survive under harsh ionizing radiation conditions for more than a million years.

In the study, which was published this week in the Astrobiology journal, scientists tested multiple "extremophile" fungi and bacteria characterized by their ability to withstand uber-harsh conditions that kill everything else, to see if they could handle those as unforgiving as Mars, which Elton John famously described as  "cold as hell" and a Northwestern writeup refers to as "harsh and unforgiving."

While a few of the organisms were able to handle the gamma rays scientists shot at them, it was D. radiodurans that was, per their reckoning, "particularly well-suited" to the extreme cold and dry of Mars.

"In the novel experiments, Conan the Bacterium survived astronomical amounts of radiation in the freezing, arid environment," reads the university writeup, "far outlasting Bacillus spores, which can survive on Earth for millions of years."

Building on the previous research which found that this hardcore bacteria could handle Mars-like radiation, the research team used spectrogram technology to measure the quantity of manganese antioxidants in the organisms' cells, which is believed to correspond to how well (and how long) they can survive such intensive radiation.

Conan the Bacterium would, the researchers noted, not survive very long at all when bathed in the ultraviolet light the Sun shines on Mars' surface — but when buried just 10 centimeters, it could survive 1.5 million years; buried 10 meters below, that figure increases to 280 million years.

"If Martian life ever existed, even if viable lifeforms are not now present on Mars, their macromolecules and viruses would survive much, much longer," study lead Michael Daly, a professor of pathology at Uniformed Services University of the Health Sciences and a planetary protection specialist, said in the Northwestern statement. "That strengthens the probability that, if life ever evolved on Mars, this will be revealed in future missions."

Daly and the Northwestern team are now urging future Mars missions that bring back and study samples to test for D. radiodurans — and also to make sure that they do so safely out of fear of alien contamination on Earth.

"We concluded that terrestrial contamination on Mars would essentially be permanent — over timeframes of thousands of years," said Northwestern's Brian Hoffman, a senior coauthor of the study. "This could complicate scientific efforts to look for Martian life. Likewise, if microbes evolved on Mars, they could be capable of surviving until present day. That means returning Mars samples could contaminate Earth."

Long story short: it's looking more and more as though Mars could be hospitable to certain types of life, at least in theory — and if it's as hardy as scientists believe, we'll want to be very careful with how we handle any samples we bring back to Earth.

Read This Next
Water Canyon
Scientists Spot Hidden Water in Mars' Grand Canyon
Martian Ammonia
NASA Rover Detects Organic Molecules on the Surface of Mars
Joseph Strikes Again
Experts Shred Paper Claiming to Identify Mushrooms on Mars
Mars Shrooms
Extremely Dubious Research Claims to Spot Fungus Growing on Mars
In Rainbows
NASA Releases Breathtaking Rover Photo of "Rainbow" on Mars
More on Hard Science
It From Bit
Tuesday on the byte
A Scientist Is Crowdfunding an Experiment to Check if We Live in a Simulation
Water Carrying
Nov 20 on the byte
Evidence Grows That Soggy Meteorites Gave Earth Its Oceans
Shroom News
Nov 20 on the byte
Scientists Build Circuit Boards Based on Mushrooms
READ MORE STORIES ABOUT / Hard Science
Keep up.
Subscribe to our daily newsletter to keep in touch with the subjects shaping our future.
+Social+Newsletter
TopicsAbout UsContact Us
Copyright ©, Camden Media Inc All Rights Reserved. See our User Agreement, Privacy Policy and Data Use Policy. The material on this site may not be reproduced, distributed, transmitted, cached or otherwise used, except with prior written permission of Futurism. Articles may contain affiliate links which enable us to share in the revenue of any purchases made.
Fonts by Typekit and Monotype.