Fragment of Planet That Hit Earth May Be Buried Inside Moon

Did a Mars-sized object smash into the Earth billions of years ago? 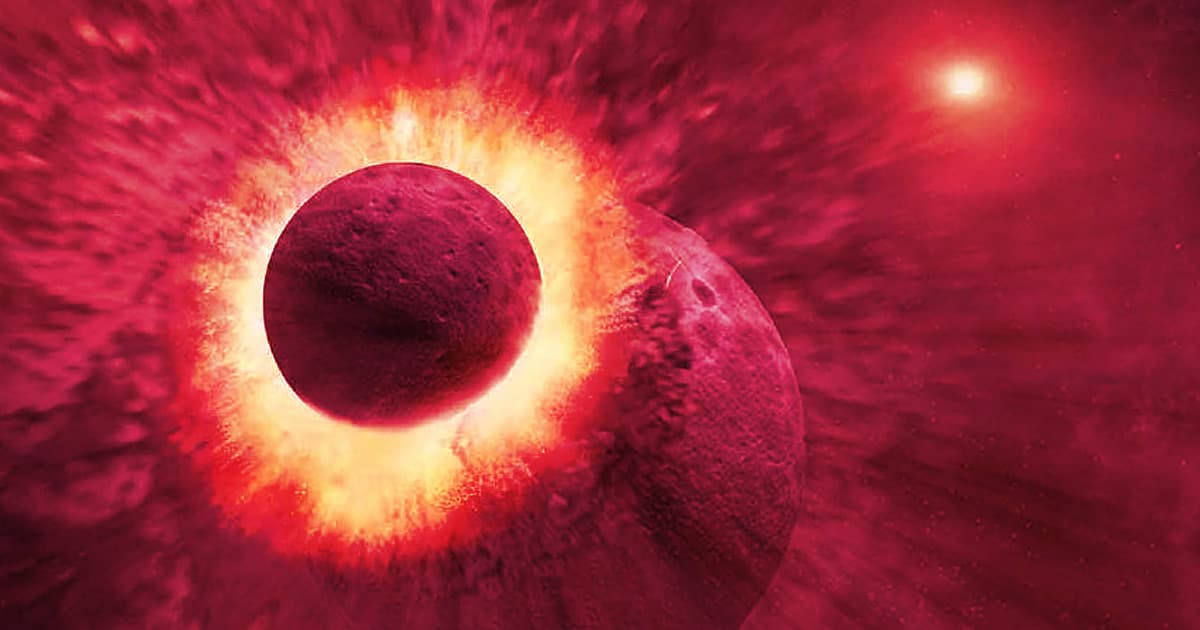 Where did the Moon come from and how was it formed? It's a question that scientists have been scratching their heads over for decades.

According to the widely-accepted "giant-impact hypothesis," the Moon was formed billions of years ago when a Mars-sized planet called Theia collided with the Earth, breaking off a large chunk in the process.

Now, researchers from the University of New Mexico say in a new paper published in Nature Geoscience that they believe they've found the remains of Theia buried beneath the lunar surface.

The big drawback to the impact hypothesis — as discussed at length by numerous scientists over many years — is the fact that even though oxygen isotopes in lunar rocks collected during NASA's Apollo missions closely resemble those found on Earth, they're strikingly different from those found on other objects in our Solar System, as explained by Science Alert.

So how could the Moon be largely made up of the remains of Theia, as many models have predicted?

Despite very small odds, Earth and Theia may have originally had similar compositions, but then been mixed up beyond recognition.

In their research, the New Mexico scientists examined oxygen isotopes in a range of different lunar rock types, collected from a variety of altitudes. They found that the deeper the origin of the rock, the heavier the oxygen isotopes, when compared to the ones found on Earth.

"Clearly, Theia's distinct oxygen isotope composition was not completely lost through homogenisation during the giant impact," the researchers wrote in their paper.

That means the oxygen isotopes didn't fully mix during the Theia-Earth impact, leading to their conclusion that Theia could've still originated from outside of the Solar System before impacting with Earth.

"This data suggests that the deep lunar mantle may have experienced the least mixing and is most representative of the impactor Theia," said research scientist and co-author Zach Sharp in a statement.

READ MORE: We May Have Finally Found a Chunk of Theia Buried Deep Inside The Moon [Science Alert]

More on the Moon: DARPA’s Working on a Nuclear-Powered Rocket for Easy Moon Access

Read This Next
Moon Sims
Brutal Video Simulates When Earth Hit Another Planet Many Years Ago
Big Moon Vat Energy
Astronomers Propose Giant "Liquid Mirror" Telescope on the Moon
Moon Juice
There's One Big Problem With NASA's Moon Water Announcement
Better Start Digging
Harvard Study: We Shouldn't Rule Out Underground Life on the Moon and Mars
Hulk Smash Planets
Watch These Brutal Simulations of Apocalyptic Planetary Collisions
More on Hard Science
Warped Tour
Feb 2 on futurism
Professor Believes Door to Warp Drive May Lie With Ethylene Glycol
Sky Bursts
Feb 2 on the byte
Astronomers Intrigued by 25 Mysterious Repeating Radio Signals From Deep Space
Tractor Beam
Jan 26 on the byte
Scientists Build Working Tractor Beam, Although It's Comically Tiny
READ MORE STORIES ABOUT / Hard Science
Keep up.
Subscribe to our daily newsletter to keep in touch with the subjects shaping our future.
+Social+Newsletter
TopicsAbout UsContact Us
Copyright ©, Camden Media Inc All Rights Reserved. See our User Agreement, Privacy Policy and Data Use Policy. The material on this site may not be reproduced, distributed, transmitted, cached or otherwise used, except with prior written permission of Futurism. Articles may contain affiliate links which enable us to share in the revenue of any purchases made.
Fonts by Typekit and Monotype.