This is what'd happen if Earth crashed into another planet. 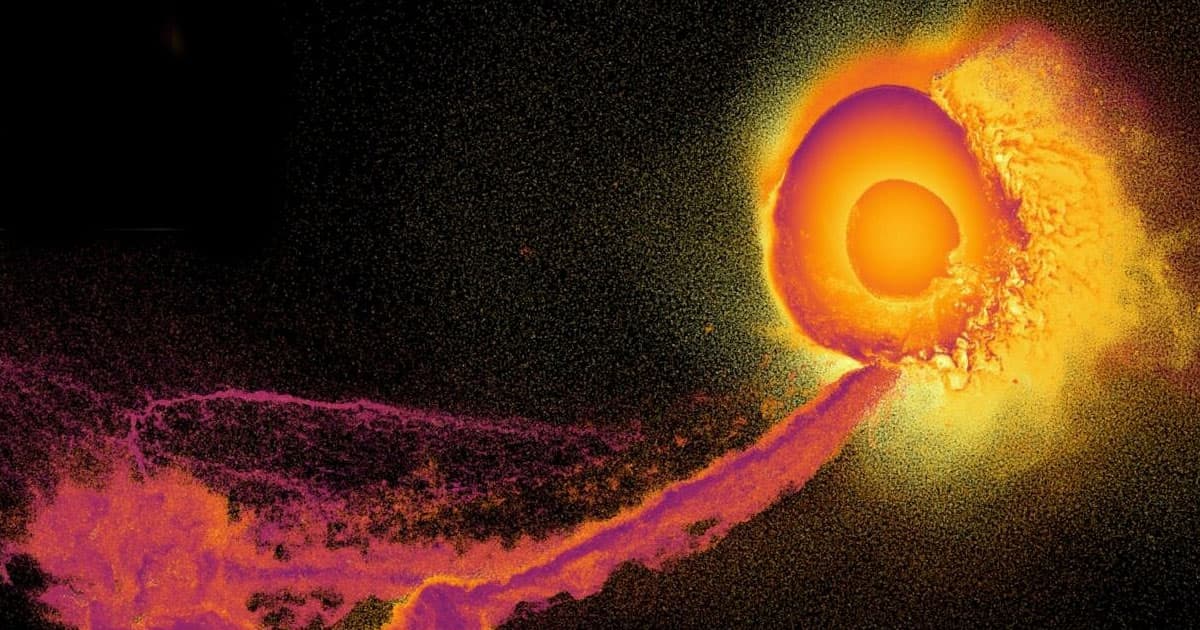 A new series of fascinating supercomputer-rendered animations put together by a team of researchers at Durham University show what would happen to an Earth-like planet with a thin atmosphere if it collided with another object.

The research could shed new light on how planets — including our own Earth — may have evolved during the early days of our solar system.

Space.com's Steve Spaleta combined the animations together into a killer video with epic accompanying music.

"We know that planetary collisions can have a dramatic effect on a planet's atmosphere, but this is the first time we've been able to study the wide varieties of these violent events in detail," said Jacob Kegerreis, a researcher at Durham University and lead author of a paper about the research published in the Astrophysical Journal last week, in a statement.

The simulations could help evaluate several hypotheses we have about the early evolution of nearby planets. In particular, it's relevant to the prevailing theory that the formation of the Moon came about when planet about the size of Mars impacted with the Earth several billion years ago.

By analyzing the new simulations, the researchers found that a grazing impact, like the one hypothesized to have formed the Moon, led to much less atmosphere loss compared to a head-on collision.

A direct hit would've led to a complete obliteration of the atmosphere, taking some of the mantle with it. The findings indicate that the Earth probably only lost somewhere between ten and 50 percent of its atmosphere, depending on the kind of impact.

"In spite of the remarkably diverse consequences that can come from different impact angles and speeds, we've found a simple way to predict how much atmosphere would be lost," Kegerreis said. "This lays the groundwork to be able to predict the atmospheric erosion from any giant impact, which would feed in to models of planet formation as a whole."

"This in turn will help us to understand both the Earth's history as a habitable planet and the evolution of exoplanets around other stars," he added.

More on planetary collisions: New Theory: Life on Earth Came From Impact With Another Planet

Read This Next
Theia is Alive
Fragment of Planet That Hit Earth May Be Buried Inside Moon
Futurism
We've Finally Recorded the Earth's Mysterious Song
Futurism
NASA’s New “Gravity Map” Corrects Fundamental Assumption About Mars
Futurism
Scientists Think Our Moon Used to Be Home to a Molten Metal Ocean and Supersonic Winds
Futurism
The Sun Is Slowly Expanding. How Can We Stop It From Killing Us All?
More on Hard Science
Warped Tour
Yesterday on futurism
Professor Believes Door to Warp Drive May Lie With Ethylene Glycol
Sky Bursts
Yesterday on the byte
Astronomers Intrigued by 25 Mysterious Repeating Radio Signals From Deep Space
Tractor Beam
Jan 26 on the byte
Scientists Build Working Tractor Beam, Although It's Comically Tiny
READ MORE STORIES ABOUT / Hard Science
Keep up.
Subscribe to our daily newsletter to keep in touch with the subjects shaping our future.
+Social+Newsletter
TopicsAbout UsContact Us
Copyright ©, Camden Media Inc All Rights Reserved. See our User Agreement, Privacy Policy and Data Use Policy. The material on this site may not be reproduced, distributed, transmitted, cached or otherwise used, except with prior written permission of Futurism. Articles may contain affiliate links which enable us to share in the revenue of any purchases made.
Fonts by Typekit and Monotype.