NASA Discovers Huge Potential Caches of Metal On the Moon 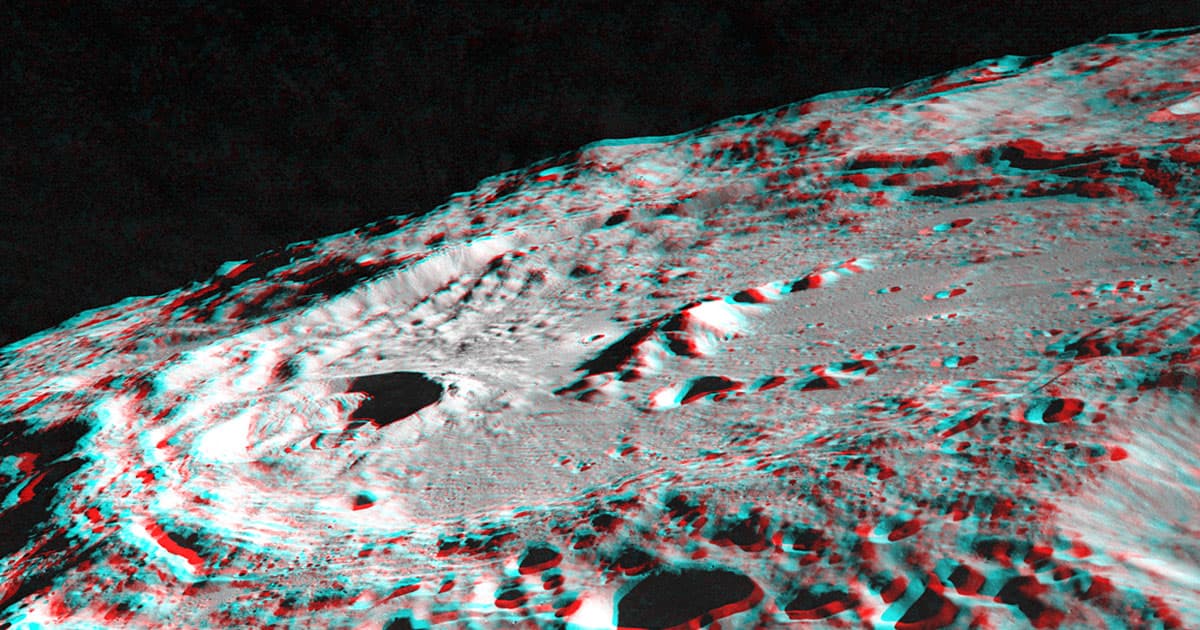 Using a small device called the Miniature Radio Frequency (Mini-RF) instrument attached to NASA's Lunar Reconnaissance Orbiter (LRO) spacecraft, a team of scientists found that there may be vastly more subsurface metals beneath the Moon's surface than previously thought.

The discovery could force us to rethink the evolution of the Moon itself. The dominant theory is currently that a collision between a Mars-sized space object and the Earth sheered off the Moon as a result of collapsing gravitational forces clumping dust and debris together.

The theory has often been used to explain why the Moon's composition is so similar to Earth's. But in reality, the material making up the lunar highlands, a bright silicate layer covering more than 80 percent of the moon, seemed to contain far fewer metal-bearing minerals than what you'd find on Earth.

But darker regions and plains of the crust formed through volcanic processes, the Moon's "maria," seem to be more metal-rich — which has researchers scratching their heads.

The Mini-RF instrument on board NASA's Moon orbiter found that the larger the crater, the more the material was able to transmit electric fields, a property known as the "dielectric constant." Scientists have found a direct link between this constant and the concentration of metal minerals including iron and titanium oxides. Yet, for craters between three and 12 miles wide, this constant didn't change.

"It was a surprising relationship that we had no reason to believe would exist," Essam Heggy, co-investigator of the Mini-RF experiments from the University of Southern California and lead author of the paper published in Earth and Planetary Science Letters last week, said in a statement.

Their hypothesis: meteors excavated metals from below as they battered the lunar surface, forming the craters in the process. That would mean there would be vast caches of useful metals lurking below a few hundred meters of Moon rock.

In fact, the lower we'd dig, the more iron and titanium oxides we'd find, according to the researchers.

That thinking echoes research released in June 2019 that suggests there is a "huge mass" of metal hiding beneath the Moon's four billion years-old South Pole-Aitken basin.

"Imagine taking a pile of metal five times larger than the Big Island of Hawaii and burying it underground," Peter B. James, author of the paper, said in a press release. "That’s roughly how much unexpected mass we detected."

“This exciting result from Mini-RF shows that even after 11 years in operation at the Moon, we are still making new discoveries about the ancient history of our nearest neighbor,” Noah Petro, LRO project scientist at NASA’s Goddard Space Flight Center, who was not involved in the research, said in the newer statement.

"The MINI-RF data is incredibly valuable for telling us about the properties of the lunar surface, but we use that data to infer what was happening over 4.5 billion years ago!" Petro added.

READ MORE: There's more metal on the moon than we thought [Space.com]

More on metal on the Moon: Scientists Are Baffled by “Huge Mass” Under the Moon’s Surface

Read This Next
Moon Sims
Brutal Video Simulates When Earth Hit Another Planet Many Years Ago
Big Moon Vat Energy
Astronomers Propose Giant "Liquid Mirror" Telescope on the Moon
Moon Juice
There's One Big Problem With NASA's Moon Water Announcement
Better Start Digging
Harvard Study: We Shouldn't Rule Out Underground Life on the Moon and Mars
Theia is Alive
Fragment of Planet That Hit Earth May Be Buried Inside Moon
More on Hard Science
Warped Tour
Thursday on futurism
Professor Believes Door to Warp Drive May Lie With Ethylene Glycol
Sky Bursts
Thursday on the byte
Astronomers Intrigued by 25 Mysterious Repeating Radio Signals From Deep Space
Tractor Beam
Jan 26 on the byte
Scientists Build Working Tractor Beam, Although It's Comically Tiny
READ MORE STORIES ABOUT / Hard Science
Keep up.
Subscribe to our daily newsletter to keep in touch with the subjects shaping our future.
+Social+Newsletter
TopicsAbout UsContact Us
Copyright ©, Camden Media Inc All Rights Reserved. See our User Agreement, Privacy Policy and Data Use Policy. The material on this site may not be reproduced, distributed, transmitted, cached or otherwise used, except with prior written permission of Futurism. Articles may contain affiliate links which enable us to share in the revenue of any purchases made.
Fonts by Typekit and Monotype.