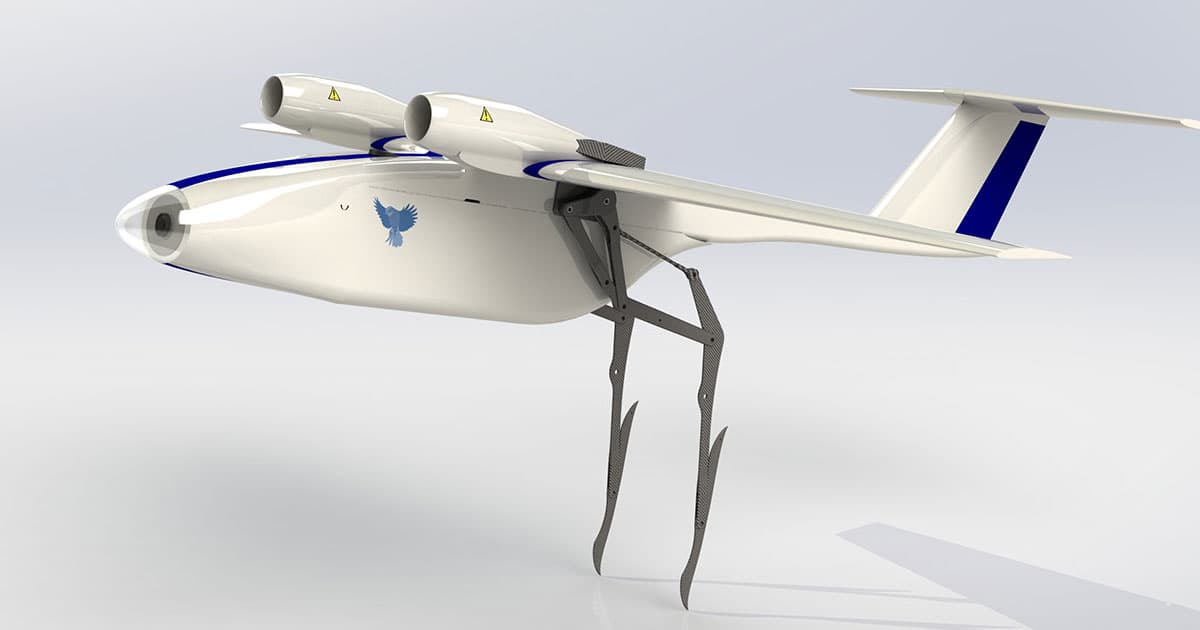 This Drone Takes off by Leaping With Bird-Inspired Legs

This drone launches itself into the air.

This drone launches itself into the air.

Once you know a little about Passerine’s drones, the startup’s name — a reference to a category of birds that perch — makes a lot more sense.

By giving its drones bird-like legs, the company believes they’ll be able to delivery heavy payloads with no runway, a fundamental limitation of existing drone designs — and if Passerine’s upcoming pilot programs go as hoped, the avian-inspired drones could soon be making deliveries in the places that need them most.

Most drones excel at one of two things. They can either take off and land without a runway, or they can quickly transport heavy payloads across long distances. But drones that can do the former can’t usually do the latter, and vice versa.

In a recently published interview with IEEE Spectrum, Passerine CEO Matthew Whalley explained how the company’s drones can both launch without a runway and fly efficiently.

“When it launches, it essentially jumps into the air,” he said. “The launch is very similar to a bird… When it jumps, it’s not about gaining height, it’s about launching the drone forward to get it up past its minimum flight speed, and at that point it’s flying like a conventional aircraft.”

Whalley believes Passerine is less than two months from figuring out how to complete a takeoff and landing cycle. Then, in the second quarter of 2019, it plans to launch several pilot projects with its bird-inspired drones.

If those go well, the company hopes to put its drones to use in the areas Whalley believes they could have the biggest impact.

“[S]pecifically in Africa, but also generally in the developing world, there is potential for this massive improvement by using drones, but there’s not a lot of infrastructure, not a lot of places where you could use a conventional fixed-wing airplane or drone,” he told IEEE Spectrum. “So you need something that can operate from very low infrastructure, and the legs came about as being a more efficient way of getting a long-range airplane into the air rather than trying to strap a quadcopter to it.”

More on drones: A Child Was Immunized by the World’s First Drone-Delivered Vaccine