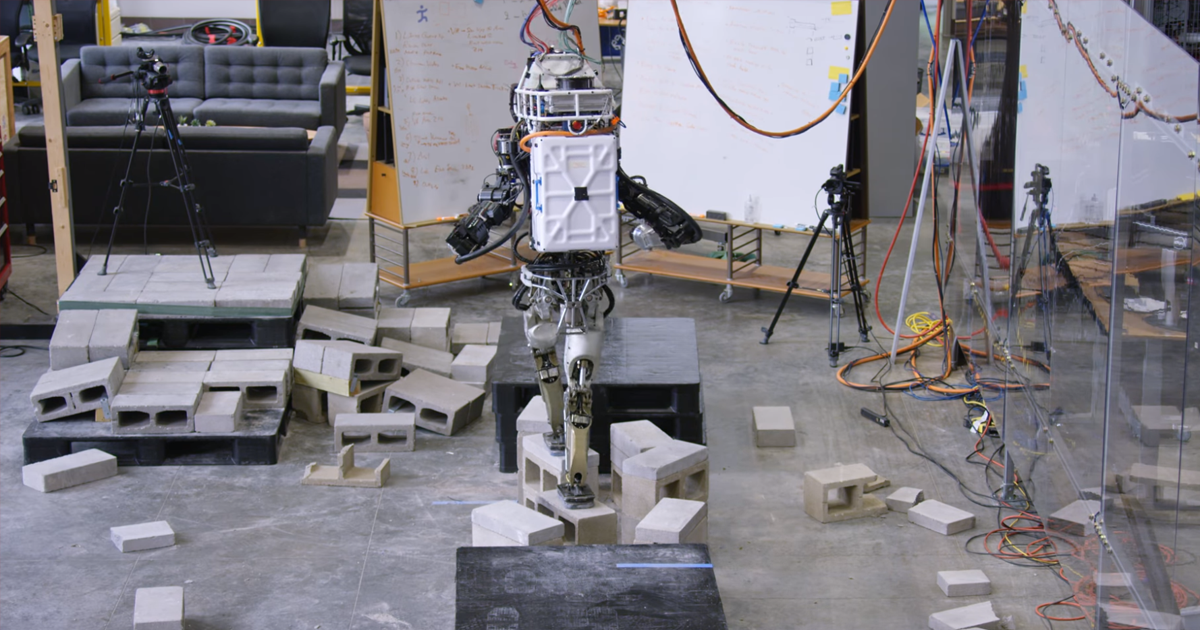 Watch This Hulking Robot Play "The Floor Is Lava"

See it walk across suspended planks and wobbly cinder blocks.

See it walk across suspended planks and wobbly cinder blocks.

On Friday, IHMC Robotics unveiled a new video in which a humanoid robot named Atlas gingerly — and autonomously — walks across various objects, including suspended wooden planks and wobbly cinder blocks.

It basically looks like someone challenged the robot to play "the floor is lava" with the leftover supplies from a construction site, and the bot is surprisingly good at the game — putting it a step closer to one day filling in for humans on dangerous missions.

Boston Dynamics built Atlas, but IHMC Robotics wrote the algorithms giving the bot the dexterity demonstrated in the video.

In the description posted along with the clip, the company says the humanoid relies on LIDAR to build a map of the area it's supposed to traverse, and then uses an algorithm to determine each step it should take to reach the other side.

Currently Atlas is successful with about half of its attempts, according to IHMC, but the company is already working to increase that rate by improving the robot's balance and the range of motion in its joints.

If IHMC can pull it off, Atlas might one day do far more than dominate at sleepover games — the goal is for the robot to serve as an avatar for humans in dangerous emergency scenarios or even as they explore Mars.

More on Atlas: The Boston Dynamics Robot Atlas Is Now a Parkour Master

You'll Be Able to Buy a Boston Dynamics SpotMini Soon, Please Don't Teach It To Kill
5. 11. 18
Read More
Create A "Real-World Avatar," Win up to $10 Million
3. 13. 18
Read More
Boston Dynamics' Bipedal Robot Can Now Do a Backflip
11. 17. 17
Read More
+Social+Newsletter
TopicsAbout UsContact Us
Copyright ©, Camden Media Inc All Rights Reserved. See our User Agreement, Privacy Policy and Data Use Policy. The material on this site may not be reproduced, distributed, transmitted, cached or otherwise used, except with prior written permission of Futurism. Articles may contain affiliate links which enable us to share in the revenue of any purchases made.
Fonts by Typekit and Monotype.