Uh Oh, They Strapped a Sniper Rifle to a Robot Dog

It's what experts have been warning about for years. 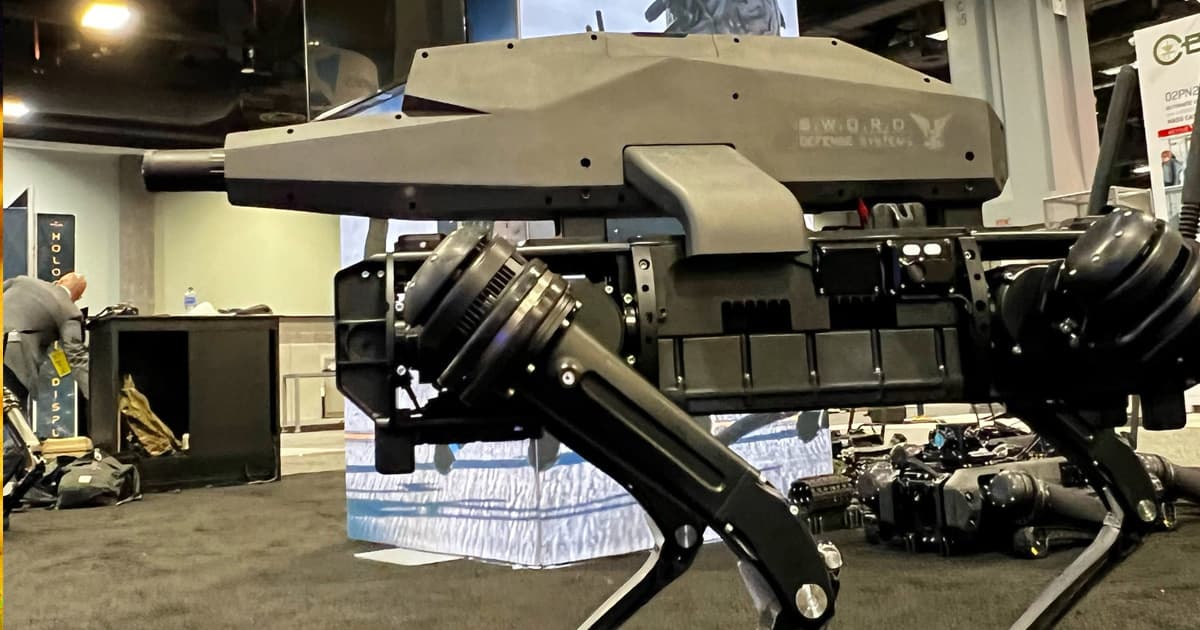 For years, we've been warning that it was only a matter of time — and now, the inevitable has happened.

Somebody strapped an honest-to-god sniper rifle to the back of a quadrupedal robot dog.

An image shared on Twitter by military robot maker Ghost Robotics shows the terrifying contraption in all its dystopian glory.

It's a nightmare come to life, a death machine designed to kill with precision on the battlefield.

"This is sad," one Twitter user commented. "In what world is this a good idea? I bet police is salivating at the chance to use these."

There's a lot we don't know about the machine, but according to an Instagram post by Sword International, a gun manufacturer, the machine is called the SPUR or Special Purpose Unmanned Rifle.

"The [SPUR] was specifically designed to offer precision fire from unmanned platforms such as the Ghost Robotics Vision-60 quadruped," reads Sword's website. "Due to its highly capable sensors the SPUR can operate in a magnitude of conditions, both day and night."

We don't know what level of autonomy the robot has or if it was designed to be fully remotely operated. We also don't know who the machine was developed for.

The four-legged robot is lugging a sniper capable of shooting 6.5 millimeter Creedmoor cartridges, a rifle ammunition, which was developed with long-range target shooting in mind.

It's a troubling new development. Any new robot built with the intent to kill should have us worried.

Read This Next
Diner Drama
People Furious at Robot Serving Pancakes at Denny's
Bot Crime
Experts Shocked by Military Robodog With Sniper Rifle Attachment
See Spot Attack
Company Mounts Paintball Gun on Robot Dog to Shoot Up Art Gallery
Bleep Bloop
Scientists Build "First Living Robots" From Frog Stem Cells
Killer Copter
Middle Eastern Nation First to Buy Drone Armed With Machine Gun
More on Robots & Machines
FROM THE DEPT. OF...
Tuesday on futurism
The Best Smart TVs in 2022
FROM THE DEPT. OF...
Dec 1 on futurism
The Best Wired Earbuds in 2022
FROM THE DEPT. OF...
Dec 1 on futurism
The Best Gifts For Gamers in 2022
READ MORE STORIES ABOUT / Robots & Machines
Keep up.
Subscribe to our daily newsletter to keep in touch with the subjects shaping our future.
+Social+Newsletter
TopicsAbout UsContact Us
Copyright ©, Camden Media Inc All Rights Reserved. See our User Agreement, Privacy Policy and Data Use Policy. The material on this site may not be reproduced, distributed, transmitted, cached or otherwise used, except with prior written permission of Futurism. Articles may contain affiliate links which enable us to share in the revenue of any purchases made.
Fonts by Typekit and Monotype.